Storms have caused death and damage in France and Britain, disrupting Christmas celebrations. Winds of up to 145 kph (90 mph) hit both sides of the channel, while power outages affected hundreds of thousands of homes. 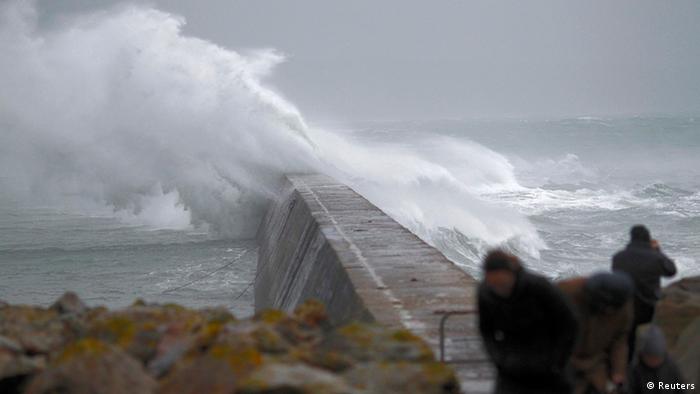 At least five people have died in Britain due to the wild weather, while a teenager in France was killed when a wall collapsed on him. There are fears more deaths could be confirmed, with a Russian sailor feared dead after falling overboard from a damaged cargo ship off the north-west French coast.

Thousands of Christians have begun to celebrate Christmas Eve at the historic birthplace of Jesus, the West Bank town of Bethlehem. But the Middle East region remains troubled for Christians. (24.12.2013)

Air, road, ferry and rail services faced widespread disruptions and cancellations, with southern England and Wales and the French regions of Brittany and Normandy among the worst hit. Ireland and the Netherlands were also affected.

While the storms had abated somewhat on Tuesday, the effects were still being felt. Around 240,000 homes in France lost electricity during the storm, with 185,000 still without power on Tuesday afternoon. The French weather service still had 16 of the country's 96 metropolitan departments on orange alert - its second-highest level - on Tuesday afternoon, having cut the number from 23 earlier in the day.

"I'm across plans to get electricity to many without power. My thoughts are with them and those facing travel problems this Christmas Eve,” British Prime Minister David Cameron said via Twitter.

The storms are also expected to hit retailers hard, with the day leading up to Christmas usually among the year's busiest.