It's anyone's guess what a Brexit could mean for trade relations between Britain and the EU. Everyone may lose or everyone may gain, but the answer lies likely somewhere in between - and far in the future. 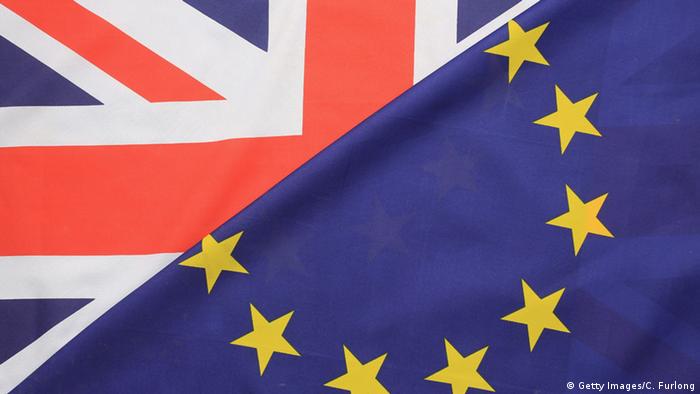 There's no dearth of studies on the economic implications of Britain leaving the European Union (EU). Supporters and opponents of a Brexit have produced tons of papers to back their respective positions.

Most studies conclude that leaving the EU would bring substantial costs, mostly for Britain. The country sells almost half of its exports to EU countries, and buys more than half of its imports from them. If Britain decides to leave, its economy could shrink by up to 14 percent, according to a study by the Bertelsmann Foundation, a business-friendly German think tank. That equates to 300 billion euros. "A Brexit should be avoided," the authors conclude.

But as hard as economists and statisticians try to come up with reliable data, they are ultimately just taking stabs in the dark. Leaving the EU would indeed change Britain's trade relationship with European countries. But it's unclear exactly how - a fightful thought for markets and businesses, which crave certainty.

"That's why they put pressure on Britons, to not vote 'leave' in these difficult times," said Rolf Weder, professor of economics and European integration at Basel University in Switzerland. "If you focus on the short term, it's obvious: You should never put into question established relationships, since that always entails costs." 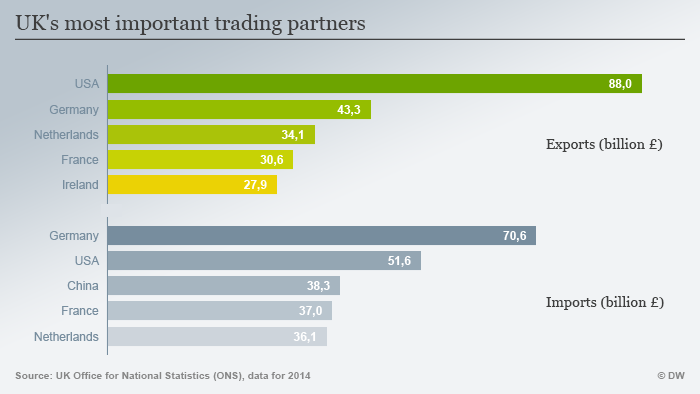 A clear idea of how trade relations will change between the UK and the EU will only emerge after a Brexit, and very slowly at that. The EU Treaty's Article 50 stipulates that both sides will have to negotiate the details of the separation, and that will take time.

Article 50 calls for a two year negotiation period, which could then be extended by the European Council. British advisory firm Global Counsel expects the period of uncertainty to last "ten years or more."

Since all depends on the outcome of these negotiations, there are no limits to imagination. Picturing their worst case scenario, researchers at Bertelsmann Foundation saw Britain as completely "isolated," stripped of all its trade privileges with EU countries and the third parties that have trade agreements with the EU. Less hostile assumptions cut the cost of a Brexit dramatically, from 300 billion to 14 billion euros ($15.8 billion), according to the study.

"Britain will of course negotiate with the aim of not completely losing access to the European single market. At the same time, the EU wants to ensure continued access to the British market for European companies," Weder told DW. "I expect both sides to seek some kind of free trade agreement."

Britain has run a large trade deficit with the EU for decades, despite the City of London being one of the world's leading financial centers. Its surplus in services is not large enough to balance its deep deficit in goods, leaving Britain with at total loss of more than 77 billion euros in its trade with the EU in 2014, according to the most recent data available. 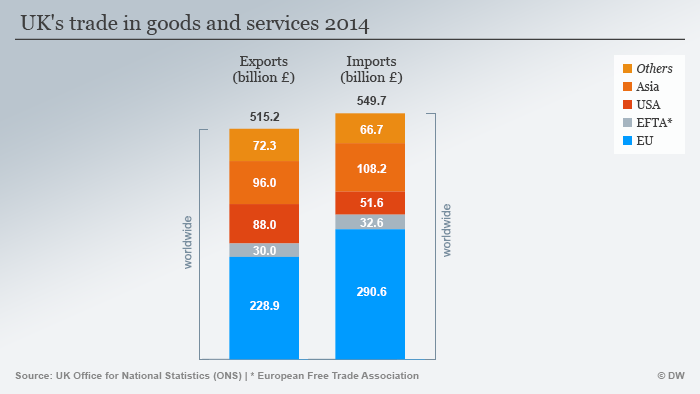 Thanks to the country's EU membership, British banks, insurance companies and legal firms can offer their services anywhere in the single market. Should Britons decide to leave the EU, negotiating favorable conditions for their finance sector is crucial.

"The EU will be determined to not treat Britain too well," expects Weder. After all, the EU would lose a net contributor to its budget, and it will be therefore unlikely to reward Britain with generous concessions.

Switzerland is often referred to as a potential model for future UK-EU relations. Trade agreements let the Alpine country, which is not a member of the EU, freely exchange goods. But even the Swiss have not managed to reach a similiar agreement for their huge financial services industry. Should Britain fail as well, its financial sector "would face the same costs that Swiss companies are already dealing with today, since Switzerland is not that well integrated," said Weder.

However, "there is little prospect of London being dislodged as Europe's leading international financial center," British advisory firm Global Counsel concludes. EU regulations might make it harder for London to serve European markets, but the City's "advantages and large network of financial and professional services are hard to replicate."

With just a couple weeks to go until the EU referendum, Britain's Leave campaign is dominated by in-fighting. Samira Shackle reports from London. (09.06.2016)

Ahead of Brexit vote, support for EU falls across Europe

A survey by the Pew Research Center suggests that support for the European Union has fallen in several EU states. In Germany, the EU's popularity has fallen eight points to 50 percent in just a year. (08.06.2016)

UK Prime Minister David Cameron has warned voters against risking the economy and voting in favor of a "little England." In the same televised Q&A, leading euroskeptic Nigel Farage said he thought the EU was "done for." (07.06.2016)

After a Brexit, Britain would not only have to negotiate with the EU. It would also need to replace existing trade agreements between the EU and third parties - which would make for a field day among law firms. Striking out on its own, Britain's negotiating position would be considerably weak.

So why take the risk of high costs and years of uncertainty? In essence, the British referendum is not about the economy, but about the idea of a different Europe. "I believe less Europe could eventually result in more Europe," said Rolf Weder. "If there is less harmonization and less integration, diversity in Europe will benefit."

In recent financial crises, European citizens have often been told there was no alternative to bail-outs, rescue packages and fiscal austerity. If Britain were to exit the EU, Weder believes, new alternatives could emerge.

For example, Britain could team up with Switzerland and other countries in the European Free Trade Association (EFTA) and try out a different model of Europe: free trade, yes, but national sovereignty over immigration, the labor market, and everything else.

Even proponents of European integration could be better off. "If Britain leaves, and maybe 2 or 3 other countries as well, the EU would become more homogeneous. So the remaining members could go ahead and set up a European federal state," Weder added. "But then, this would not be the only option in Europe, and the people could choose between these alternatives."

Study: "Brexit: the impact on the UK and the EU"

Article 50 of the EU Treaty