The UK has given Brussels ten days to respond to its demands over customs checkpoints in the Irish Sea. The UK's Brexit minister has told the EU to rethink the terms of its trade accord. 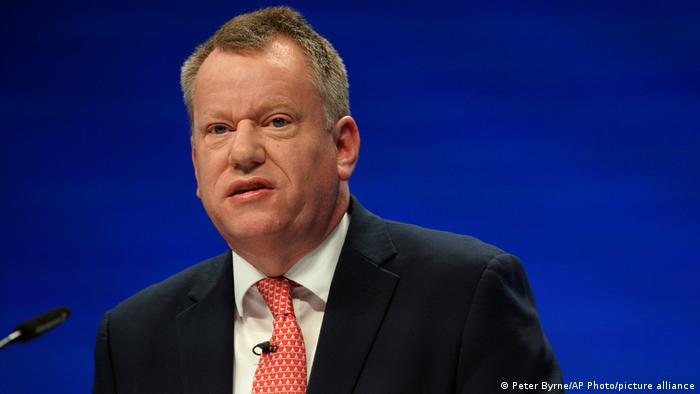 David Frost blamed the EU's "heavy-handed" approach for the crisis

The UK threatened to take unilateral action on Monday, in defiance of the EU, to stop a de facto customs border in the Irish Sea.

This comes after repeated rejections from the EU to re-negotiate part of the Brexit deal regarding Northern Ireland.

"That may in the end be the only way to protect our country, our people, our trade, our territorial integrity, the peace process, and the benefits of this great UK of which we are all part," said Brexit Minister David Frost at a conference of his Conservative party.

He added, however, that he would exhaust all other solutions before triggering Article 16, a back-door measure in the country's deal with the EU that allows either party to back out of a condition it finds to be harmful.

What is the Northern Ireland Protocol?

One of the thorniest issues in the Brexit negotiations was the future of the border between Northern Ireland and the Irish Republic. An open border is a key feature of the 1998 Good Friday Agreement — a peace deal that ended decades of sectarian violence over the issue of Northern Ireland unifying with the Irish Republic or remaining part of the UK.

In 2019, the UK and the EU agreed to install customs checkpoints on shipping lanes between Great Britain and Northern Ireland to prevent goods from entering the EU illegally. This part of the agreement was met with fury from Northern Irish unionists, who said it compromises their position in the wider UK.

After Britain left the EU's single market at the start of 2021, difficulties in moving goods from the mainland to Northern Ireland have mounted. However, the EU has maintained that it will not renegotiate a deal that both parties agreed to in good faith.

"Yes, we agreed the protocol in that difficult autumn of 2019. We knew we were taking a risk, but a worthy one," Frost said, as he tried to address criticism of the government signing off on the deal. He added that "we worried right from the start that the protocol would not take the strain if not handled sensitively. As it has turned out, we were right. The arrangements have begun to come apart even more quickly than we feared."

The UK said it would give Brussels ten days to respond to its demands, and will likely trigger Article 16 in November if nothing changes.

"We are working intensively to find practical solutions to some of the difficulties that people in Northern Ireland are experiencing," European Commission spokesman Daniel Ferrie told reporters on Monday.

European Commission vice-president Maros Sefcovic, who oversees post-Brexit EU relations with Britain, said he is readying a set of proposals to present to lawmakers that he hopes will ease the difficulties in the Irish Sea.

Brexit has made the headlines again in recent weeks as Britain experiences fuel shortages and empty supermarket shelves in some areas. Experts have said the issues are related to Britain's exit from the European Union due to a lack of truck drivers and bottlenecks in supply chains.