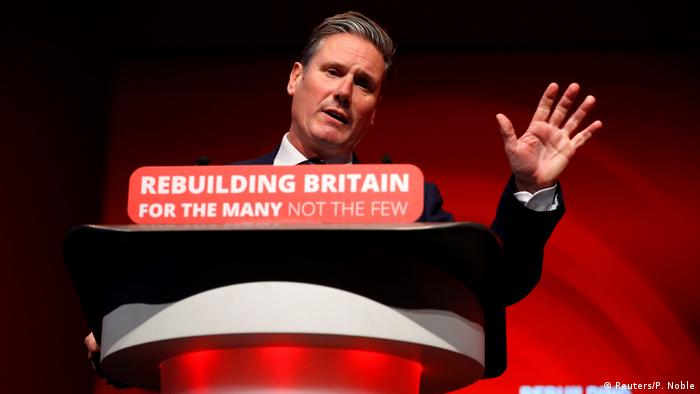 The UK's main opposition announced on Saturday that Brexit spokesperson and former director of state prosecutions Keir Starmer is the new leader of the Labour party.

Starmer, 57, will take the helm of the divided 500,000-member party, replacing the left-wing Jeremy Corbyn, who had led the party since 2015.

"It is the honor and the privilege of my life to be elected as leader of the Labour Party. It comes at a moment like none other in our lifetime," Starmer said.

Angela Rayner was elected as deputy leader in a vote of Labour's half a million members.

"Congratulations to @Keir_Starmer, the new Leader of the Labour Party!" the party said on Twitter, after a three-month leadership campaign.

Starmer has pledged to get the party back in shape following years of dwindling popularity.

In an unusual move due to the coronavirus outbreak, a planned special conference had been canceled and the results were released in a press release. Candidates were required to pre-record their victory speeches.

Labour deteriorated even further after Corbyn called on the already divided party to remain "radical" despite its disastrous decline in support during a snap election in December. The election marked Corbyn's second defeat, and the fourth for Labour since it left office in 2010.

December's general election proved the worst result for Labour since the 1930s.

Corbyn later apologized and agreed to step down after the party lost 59 seats in the election – paving the way for Prime Minister Boris Johnson's Conservatives to secure a large parliamentary majority.

Starmer has now vowed to unite the party after years of controversy surrounding Corbyn's socialist agenda and his handling of claims of anti-Semitism.

UK Prime Minister Boris Johnson's handling of the coronavirus pandemic has been confused, flippant and downright dangerous. As DW’s Rob Mudge writes, he is clearly out of his depth. (25.03.2020)

Even the best-laid plans can go awry. Rishi Sunak's first budget as the UK's chancellor of the exchequer was supposed to pave the way for an economic "golden era." Then COVID-19 happened, forcing Sunak to change tack. (10.03.2020)