Tensions over licensing rules for European Union fishing boats are rising as France has vowed to block access to its ports and the United Kingdom has threatened a "calibrated response.'' 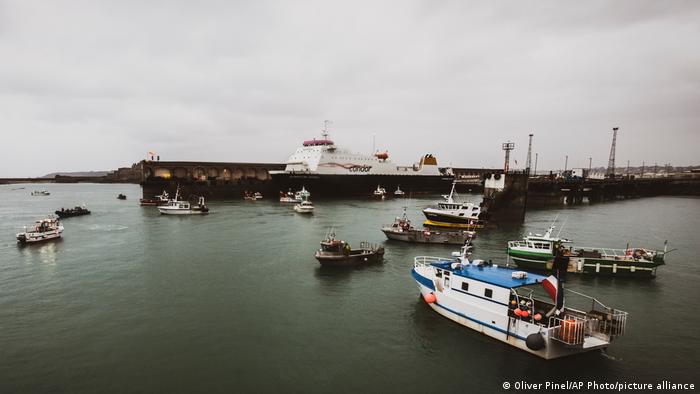 French fishermen seen off the English Channel island of Jersey

A British trawler fishing in France's territorial waters was handed over to French authorities for operating without a license on Thursday, further escalating tensions between the neighbors.

Another British boat fishing near the port at Le Havre was issued a verbal warning, French Maritime Minister Annick Girardin said on Thursday.

"It's not war, but it is a fight," Girardin told RTL radio, as the country stepped up surveillance during negotiations.

The seized trawler had been rerouted to Le Havre with a maritime police escort and was tied up at the port's quayside. The maritime ministry said the vessel's captain could face criminal charges and his catch confiscated.

Tensions have been rising between the two neighbors over licensing rules for EU fishing boats that want to operate in waters around Britain and the Channel Islands after Brexit.

The UK has very rich waters that come in biological breeding grounds along the northern French coastline, a shallow, sandy strip that stretches to Denmark.

France has been angered by the rejection of its boats by Britain and the self-governing Channel Islands of Jersey and Guernsey. Both depend on London for defense, as well as foreign affairs.

Danish, Dutch and French fishing vessels are particularly dependent on fish caught in UK waters — each of them catch more than 100,000 tons of fish off the UK coast every year.

What is the French position?

Following Britain's exit from the European Union, France says its fishermen lack half the licenses they need to fish in UK waters. Earlier on Wednesday, France said it was working on possible sanctions to be imposed starting November 2 if the licenses were not issued.

Under the new measures, power supplies to Jersey could be affected. France could also prohibit British fishing boats from unloading in several French ports, the French government said.

France is also looking to include additional customs checks on goods going to and from the UK.

What is the UK’s position?

The UK says close to 98% of the licenses have been issued.

"Obviously [the seizure] is disappointing and we as a country have fulfilled all our obligations under the TCA (trade deal)," said Home Secretary Priti Patel..

Britain responded to France’s threat of sanctions on Thursday, calling them "disappointing and disproportionate," and "not what we would expect from a close ally and partner."

The country said the measures "do not appear to be compatible" with the UK-EU Brexit withdrawal agreement "and wider international law, and, if carried through, will be met with an appropriate and calibrated response."