Brexit: European Commission says 'sufficient progress' has been made

EU, Irish and British negotiators have made enough progress on a Brexit divorce deal. The European Commission says exploratory talks between the UK and the EU on future trade relations can now begin. 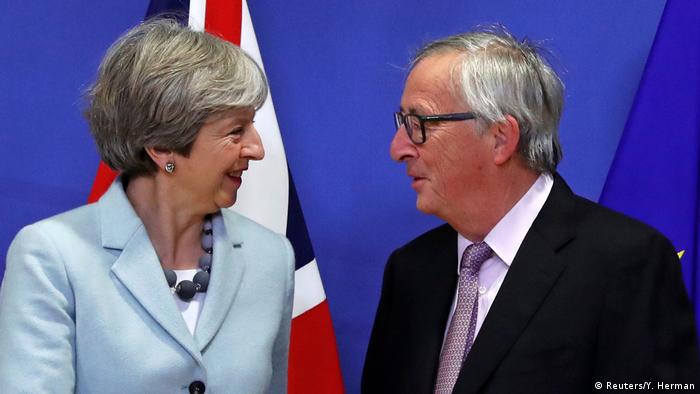 Britain and the EU have made "sufficient progress" on a Brexit divorce deal, paving the way for the two sides to move onto the next phase of negotiations, EU Commission chief Jean-Claude Juncker said Friday in Brussels.

The EU executive said a compromise had been reached after tough talks that would allow the broadening of Brexit talks to include future trade relations and a transition period. The deal could be approved by the 27 EU member states as early as next week.

European Council President Donald Tusk told reporters that "exploratory talks" on Britain's future relationship in the areas of trade, defense and security could now begin. He emphasized that although an agreement had been reached for now, "the most difficult challenge" was still ahead.

During the transition period, Britain will have to respect all EU laws as well as stick to its budgetary commitments and the bloc's judicial oversight. However, it would no longer take part in decision-making that will be done by the 27 remaining states.

Michel Barnier, the EU's chief negotiator pointed out that any final agreement on the UK's exit from the EU must be ready by October 2018.

The EU had been calling for clarity on three key issues — the Irish border, a financial settlement, and the rights of EU citizens in the UK — before it agrees to start trade talks on future relations.

"This is a difficult negotiation but we have now made a first breakthrough. I am satisfied with the fair deal we have reached with the United Kingdom," Juncker said.

Theresa May: 'There will be no hard border'

British Prime Minister Theresa May flew to Brussels early Friday morning to meet with Juncker after all-night talks with EU and Irish negotiators in London seeking to overcome an impasse on what turned out to be the crucial sticking point, the future status of the Irish border.

Read more: The Irish border: what you need to know

May said there would be "no hard border" between Ireland and Northern Ireland and the UK would guarantee the 1998 Good Friday peace accord.

Arlene Foster, the head of the loyalist Democratic Union Party (DUP) which is propping up May's government, told Sky News that she was pleased that "there is no red line down the Irish Sea."

"We have the very clear confirmation that the entirety of the United Kingdom is leaving the European Union, leaving the single market, leaving the customs union," she said, however, without creating a hard border between the Republic of Ireland in the south and Northern Ireland, which is part of the UK.

The technical details of the Irish border issue will be fleshed out during trade talks during the next phase of Brexit negotiations.

On the other two main Brexit issues, May said after much "give and take" an agreement had been struck to guarantee the rights of 4 million EU-UK citizens in and on the divorce bill the sides reached "a settlement that is fair to the British taxpayer."

The marathon talks come days before a Sunday deadline to reach breakthrough ahead of a summit of EU leaders set to take place December 14-15, where the decision about advancing to the second phase of negotiations will given a green light.

A deal preventing a "hard border" from splitting the island of Ireland has collapsed at the last minute. Ireland's premier said he was "disappointed" that the UK is no longer in a position to conclude the deal. (04.12.2017)

No hard border, rights for EU citizens in UK