Breastfeeding divide and the global demand for formula | Science | In-depth reporting on science and technology | DW | 28.06.2022

Breastfeeding divide and the global demand for formula

While hospitals in Europe get more 'baby friendly' and promote breastfeeding, new mothers in Kenya don't get that support. But not all can afford formula. 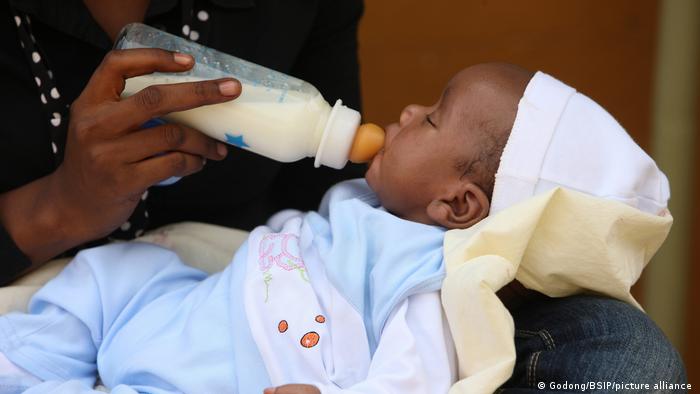 This is the first piece in a two-part series about some of the reasons why some mothers opt for formula instead of breastfeeding. We have attempted to cover as many of the deciding factors across these two articles, but this is at heart a very personal, individual decision for every new mother. The second part in the series is linked here at the bottom.

Most of the world's women start breastfeeding after giving birth, but  only 44% exclusively breastfeed to the sixth month, according to the World Health Organization.

Infants can't eat solid food in the first half-year of their lives, leaving them reliant on either breast milk or baby formula. This fact makes the current formula shortage in the US, where only one in four babies are exclusively breastfed to six months, dire.

The baby formula shortage was caused by production and supply-chain issues and an investigation by the US Food and Drug Administration at factory run by a major producer of baby formula, Abbott Nutrition. The company is one of four that together produce about 90% of formula on the US market. Although production had been getting back on track, Abbott Nutrition had to pause production yet again at the factory when a storm hit the site in Michigan on June 13.

Women in rich, developed countries are the least likely to exclusively breastfeed their children to six months

Research suggests that exclusively breastfeeding is a healthy, natural way for women to nourish their newborns. It's good for the mother-infant relationship and cheaper than formula. So, why do so few women stick with it?

In this two-part series, we want to explain some of the structural and medical reasons why some women use formula and how the importance of breastfeeding may be different depending on where you live. In part one, we're asking why so many women use baby formula instead of breast milk.

It starts at the hospital

There are various reasons why women opt against breastfeeding. But a lot of experts say that a woman's experience at the hospital after birth plays a decisive role.

For decades, the WHO has been pushing hospitals to implement "baby friendly" measures to promote breastfeeding at birth. Those first 24 hours are crucial for a baby to learn how to feed directly from its mother.

Most hospitals in the US and Europe are "baby friendly." But in other parts of the world, that's not always the case.

Antonina Mutoro, a maternal and child well-being researcher for the African Population and Health Research Center in Nairobi, Kenya, helped conduct a survey in the informal settlements of Nairobi, which a recent UN report called "some of the most dense, unsanitary and insecure slums in the world."

Of the new mothers surveyed, only 2% were exclusively breastfeeding their babies and not bottle feeding.

That's despite the fact that many of the women Mutoro encountered could not afford a regular supply of formula. They were using cow's milk or foods like porridge to feed their babies before the age of six months, she said.

Mutoro said the lack of breastfeeding in the settlements was due in part to the fact that the women probably didn't learn about breastfeeding at the hospital after giving birth. 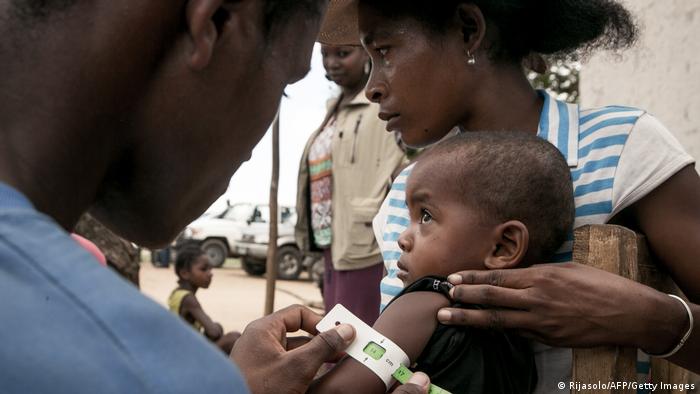 In many developing countries where clean water is scarce, lack of education about breastfeeding can cause infant malnutrition

"If it's not a baby friendly facility, at times, health workers offer to take the child and give it formula. That sets the precedent," Mutoro said.

Other times, women were told by doctors that they don't have enough milk. Mutoro said a woman's ability to produce breast milk typically depends on demand. Shortly after birth, that demand is created by placing the baby on the mother's breasts, which helps stimulate milk production.

"But you find that the narrative is usually, 'Oh, I do not have enough milk.' So, the solution is to look for other options and formula is usually the fastest option," said Mutoro.

It is not due to ignorance, said Mutoro — most staff who work in pediatrics or gynecology know that breastfeeding is good for the baby, she said. But the structures aren't in place to promote it, and when the workload becomes overwhelming, some doctors and nurses don't take the time to train new mothers if they can offer baby formula instead.

Then there's the baby formula industry.

In 1981, the World Health Assembly, the decision-making body of the WHO, adopted an international marketing code for breast-milk substitutes. The code banned the marketing of formula, with an aim to prevent women from being discouraged from breastfeeding.

But a WHO report published in February shows companies have continued to aggressively market their products online through methods that didn't exist when the code was adopted, like advertising algorithms tailored to reach new moms and parenting apps.

The report says that while breastfeeding rates have largely stagnated in the four decades since the code's implementation, formula sales have doubled. 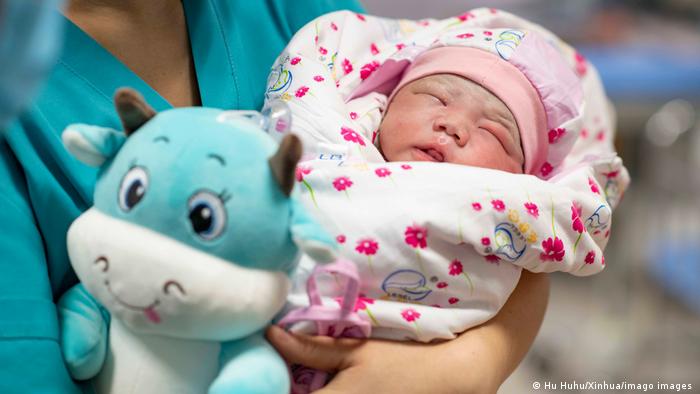 In China, only around 1 in 5 babies are exclusively breastfed to 6 months

Rafael Perez Escamilla, one of the authors of the WHO report, said that even at baby friendly hospitals, women did not always receive the support they need to understand how to breastfeed once they got home.

Perez Escamilla said there were two reasons for that. In most medical nursing schools, students may only receive a couple of hours of breastfeeding training throughout their education.

"I'm at a great institution, Yale University, and I'm in charge of [teaching] breastfeeding, a component of the training of medical school students, and it's like two hours," Perez Escamilla said.

Without sufficient hands-on training, health care providers lack the skills to teach women how to nurse their own babies. That work is often passed onto breastfeeding peer counselors or lactation consultants, Perez Escamilla said.

But in many countries, lactation consultants aren't paid for by public health systems, making their services available only to women who can pay for them privately.

And sometimes providers may understand the benefits of breastfeeding but do not promote it because they're being courted by the formula industry, Perez Escamilla said.

"Many of them get invited to dinners, they get their conferences paid, they get books, some of them may even get a kickback if they prescribe a minimum of X number of products," he said. 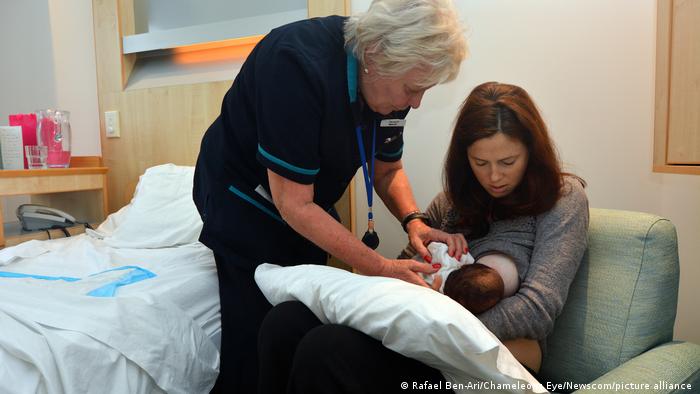 Breastfeeding is a full-time job

If a woman is breastfeeding, her breasts will fill with milk every few hours. That milk needs to leave her body in some way — either by feeding a baby or by pumping — or it will cause her pain.

In Germany and many other European countries, women are allowed to take up to a paid year off work after giving birth, making the question of pumping less of a problem.

In other countries, including the US, that is not always the case, or the length of maternity leave differs.

If a woman cannot afford to leave work for six months, she will need to pump on the job. That is possible in the US and protected by law — women must be granted a place where they can pump their breast milk at work.

For women who work in the knowledge industry and have their own office, this may be OK, said Kailey Snyder, a professor at the Creighton University School of Pharmacy and Health Professions in Omaha, Nebraska. But not all women have access to a personal office.

Some countries lack legal protections for mothers, making breastfeeding difficult when they have to go back to work

"It's a completely different story if you're asking a young woman that works in a fast food industry to ask her manager to give her space to pump, and maybe the only ample space is his office," said Snyder. "That's not feasible and doesn't often happen even if she's legally protected to pump."

The reasons why some women use formula aren't just structural — some women want to nurse their babies, but can't. We explore some of the reasons in the second part of this series here.

Correction, June 27, 2022: A previous version of this article suggested that there was no legal provision for paid maternity leave in Kenya. This has now been corrected. We apologize for the error.