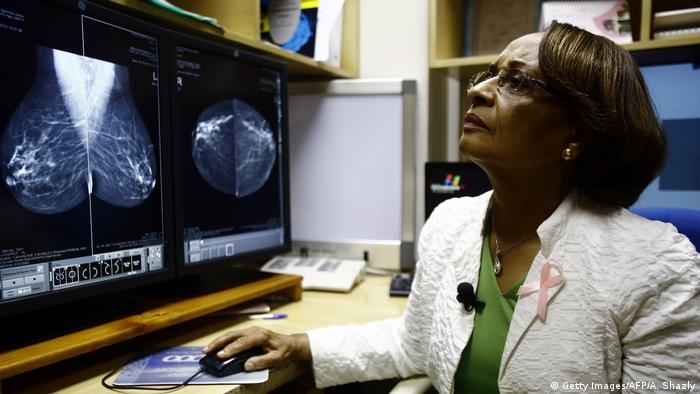 Breast cancer rates are increasing in many African countries

Thousands of people took to the streets of Abuja on Saturday to march against breast cancer. The event, dubbed #WalkAwayCancer, was organized by the Medicaid Cancer Foundation (MCF), one of several NGOs in Nigeria which works to raise awareness of the disease.

Breast cancer is currently the most common type of cancer worldwide, according to the World Health Organization. In 2020, 2.26 million cases were recorded.

While breast cancer cases were historically low in the West African country, they are now on the rise, representing about 23% of all cancer cases.

One of the biggest boundaries holding back breast cancer detection and treatment in Nigeria is the lack of information of risk factors and symptoms of the disease. Those who are aware may be hesitant to seek treatment due to the high costs involved or sociocultural factors.

Cancer survivor Hadiza Aliyu Manga now leads her own awareness campaign at the Hadiba Cancer Foundation in Abuja. She said her own experience motivated her to inform as many other women as possible about the disease.

"We do breast cancer awareness for women on cancer prevention," she told DW. "And we use social media to [spread information] on breast cancer examination and early detection. We show pictures of people living with cancer and their treatment."

Abuja resident Adebola Agbaje said the awareness campaign has had an impact on her relationship with her own health.

"It has really helped me a lot," she told DW. "For some time I couldn't even [examine] myself, but now with the campaign I know I can go to the hospital and they can do that for me. Even with just that message, I was able to understand early detection goes a long way towards helping." 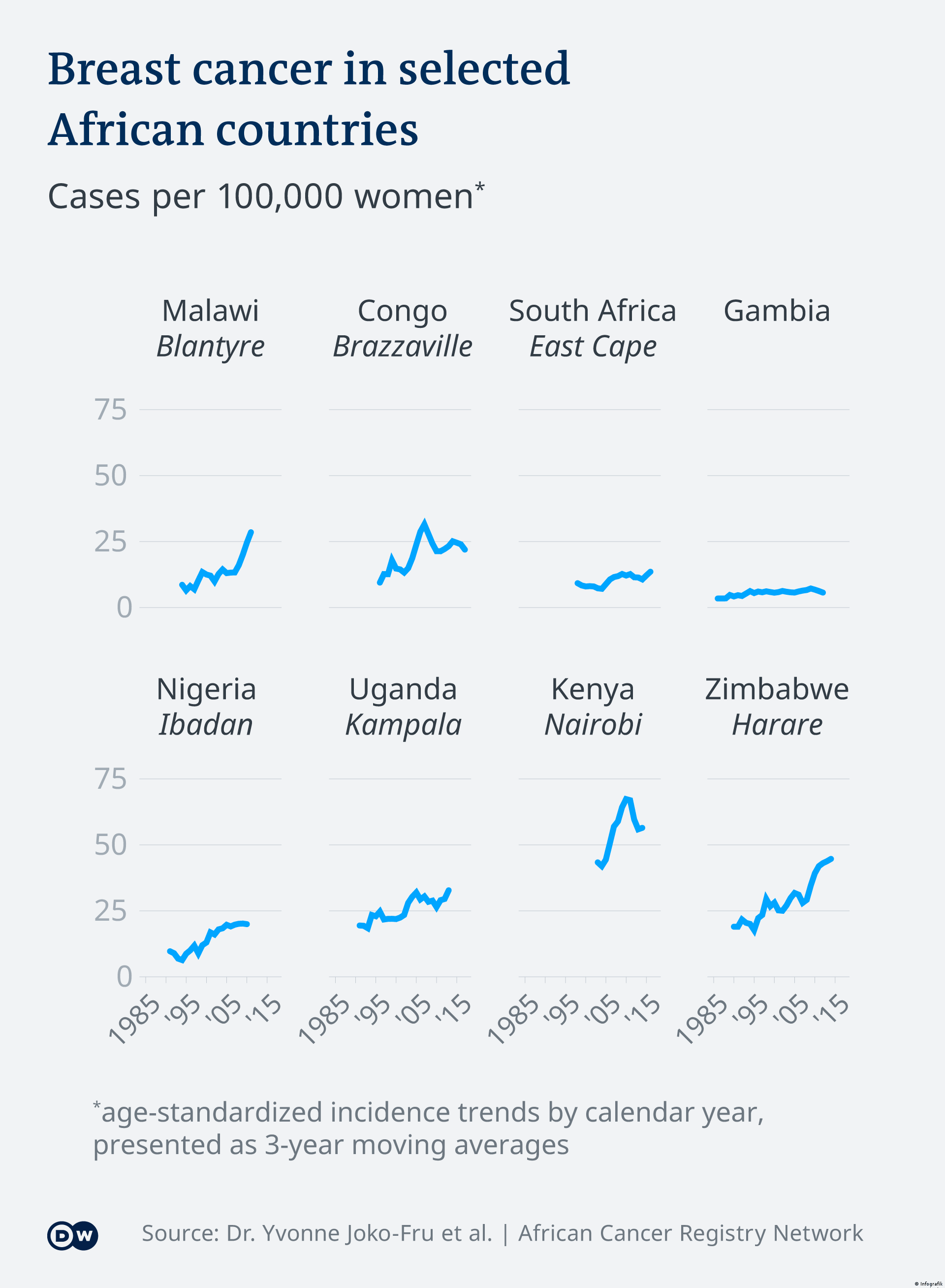 Rates on the rise in Uganda

In the township of Seeta in Uganda, Agnes (not her real name) is still recovering from breast cancer treatment. She received a single mastectomy — the surgical removal of one breast — followed by chemotherapy.

But with low rates of breast cancer awareness in the country, she said she often felt confused when her doctor explained her treatment plan and her prognosis.

Breast cancer is the second-most common type of cancer among women in Uganda after cervical cancer. There has been a push in recent years to increase awareness of the disease, however according to the Uganda Women's Cancer Support Organization (UWOCASO), more than 75% of breast cancer patients in the region first present at a late stage. 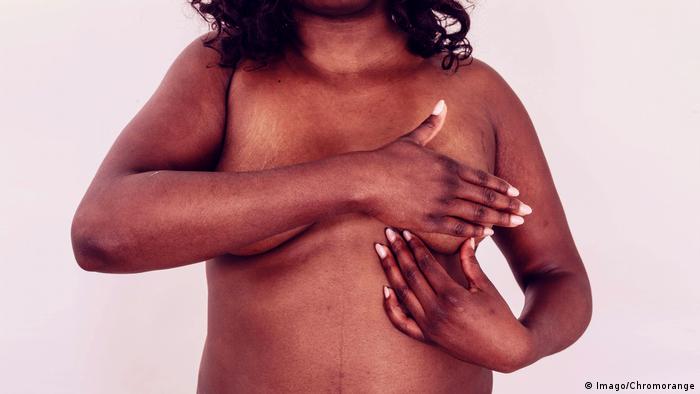 While symptoms and quality of life can be improved by palliative care and psychological support, many patients in Uganda do not have access to these services due to a range of barriers, such as issues with the health care system or financial hardship.

Agnes is one of 2,639 breast cancer cases registered at the Uganda Cancer Institute in Kampala. Oncologist Dr. Noleb Mugisha, who is head of cancer prevention at the center, said he has noticed a significant uptick in cases.

Some patients like Agnes have no family history of cancer and are often left wondering what caused the disease. Mugisha said there are a number of health factors that he sees in his patients which can contribute to a higher risk of developing breast cancer.

"Breast cancer risk is increased by a high fat diet and sedentary lifestyle," he said. "Many people are now able to drive, so they move from one place to another without being physically active. People are also more likely to eat a lot of meat — a lot of fats and a lot of oils. So this is what is responsible for most of the breast cancer increase. I think we need to watch out." 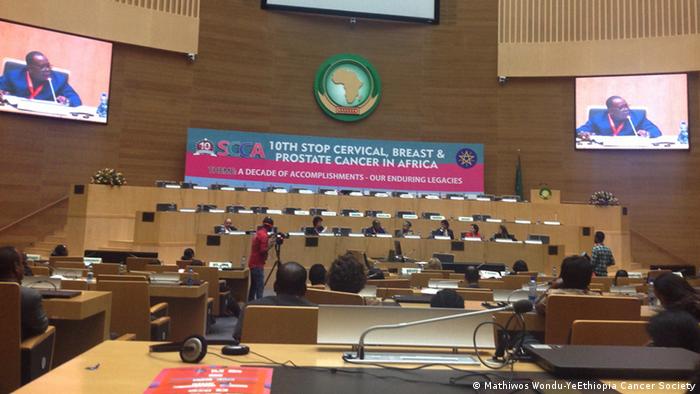 Breast cancer rates are also on the rise in Malawi. However, the country has only one treatment center in Kamuzu Central Hospital in the capital, Lilongwe.

Here, too, most women only come to health facilities once the disease has progressed to a late stage, making treatment longer and more difficult.

According to a study conducted in 2014, the median survival rate for breast cancer in Malawi from the time of diagnosis is 5.6 months.

After her diagnosis, Sophie Nsothi had a double mastectomy — the surgical removal of both breasts. The 64-year-old said she believes awareness is vital to stemming the rising numbers.

"The government should take an active part in bringing awareness, especially to rural areas," she told DW.

"When I was going for treatment I saw women in a worse state than I was, but they [didn't] believe that it was breast cancer. So, I would advise women to do a self-awareness test every month, especially those from 30 years and up." 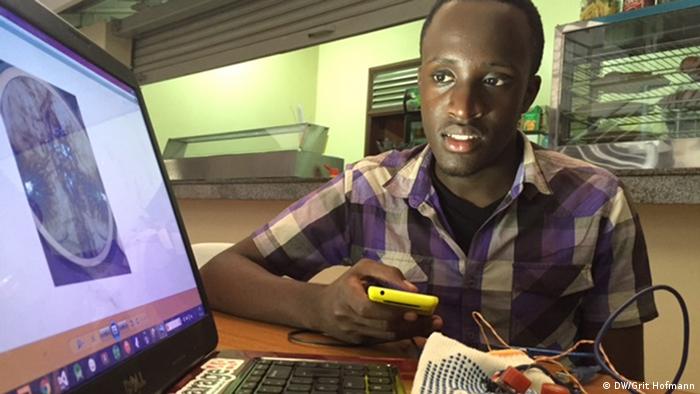 Breast cancer screening is important for early detection of the disease

Malawi's Health Ministry has called for breast cancer screening to be integrated into primary health care and routinely offered to all women. However, these services remain widely unavailable, or run at a very limited capacity.

Despite the grueling treatment, Nsothi considers herself fortunate that she was able to access it in the first place. Now recovered, she tries to monitor her health as best she can.

"My life has been well because I try to live healthy and do whatever is necessary, like exercise," she said. "Because with cancer you never know. It may come back again."

Do you know how to detect breast cancer?