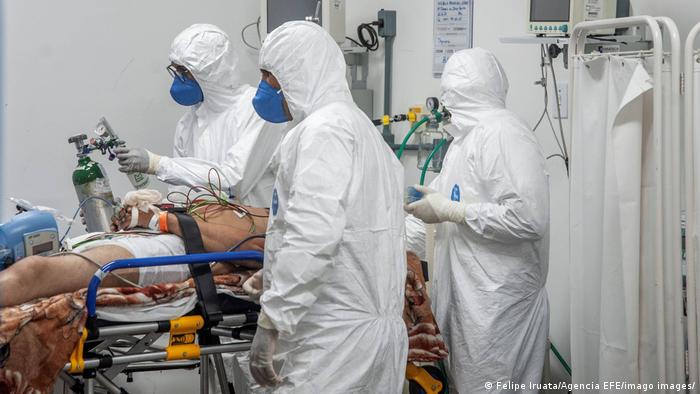 Hospitals in Brazil are massively over-stretched

DW: Is the pandemic out of control in Brazil?

David Sufiate: It's hard to say what out of control means in the context of a pandemic. But we are definitely seeing too much strain on our entire health system, from private hospitals to state hospitals. The situation is very serious.

At Fiocruz Hospital we have been filled to capacity for over a month, sometimes over. New patients are only admitted to intensive care units when others are discharged or die. I can't say that it's worse now because we've been overburdened for about three weeks.

Older people have already been vaccinated. Who are the patients being admitted to hospitals at the moment?

As of yesterday, there is no patient over 80 in the ICUs of the Fiocruz hospital. That shows very clearly the role that the vaccines are playing in the pandemic. At the moment, it's younger people who are affected. The politicians encourage them to leave the house and expose themselves to the virus, with the result that they, too, are getting ill.

Which age group is most affected?

The majority is between 30 and 70. If I were to isolate an age group, I would say the 40 to 60-year-olds. They're the ones who are most affected and being hospitalized.

Has the virus changed?

It seems clear that some mutations are more infectious. At Fiocruz we can carry out sequencing. Ninety percent of patients have the P.1 mutation at the moment. So, the virus has mutated and is more contagious. Whether that means that the development of the illness is worse is hard to say for now. According to some small studies, this mutation spreads faster. It is infecting more people.

So, in terms of statistics, there are more people falling gravely ill. Whether this is due to the mutation is not yet clear. There haven't been enough studies.

Are people staying in intensive care for longer now?

The younger patients have greater reserves and it takes longer for their organs to fail. They have more endurance, that's one way of putting it That means they remain in intensive care for longer.

What are you most in need of in the ICUs?

We're most in need of personnel for intensive care. We don't have a shortage of medicine or equipment. But many doctors can't get used to working in intensive care. That's making a huge difference.

This is also true of other areas — for physiotherapists, carers and all other areas. One year since the beginning of the pandemic, we still lack qualified staff.

But many of those working in the health sector are simply tired after such a long time. So many of my colleagues are giving up their jobs as doctors. Many are no longer working in intensive care. They don't want to hear about COVID anymore. It's very dramatic indeed.

What could the central government do for you?

They should be vaccinating people! All the funds and all the political will should be going towards a mass vaccination program. Recently, 4,100 people died in one day! With vaccines, we could alter the situation.

The central government has already said that there will not be a lockdown. Do you think that a lockdown would be appropriate?

There's no doubt about it! Take the city of Araraquara, for example. There was a lockdown there, and there's another one at the moment. And they've just brought the death toll down to zero. We need more funds. We just can't let 700 people die because they were on the waiting list for an ICU bed. We simply can't get our work done. Vaccines won't stop people from catching COVID-19 but they will stop so many people from getting it at the same time.

And a lockdown also means fewer people walking around. This has been talked about so many times. I refuse, in April 2021, 14 months after the pandemic began, to explain to people that a lockdown would help. It does help, and it's a useful instrument.

Another issue that needs to be discussed is: How will the central government make sure that people do not go hungry? There are over 20 million Brazilians below the poverty line. This is very worrying. 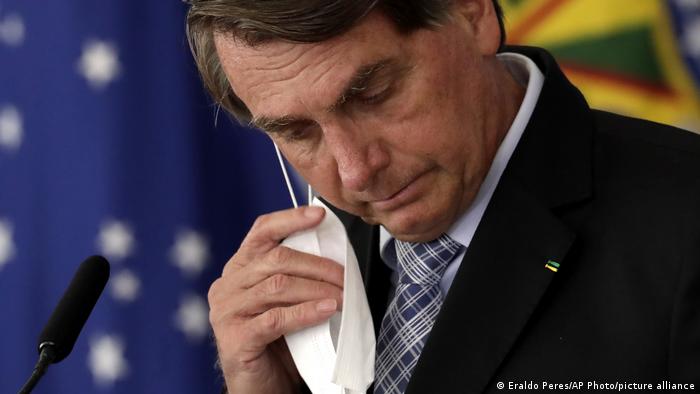 Bolsonaro should be doing more to fight poverty, Sufiate says

Have you noticed more poor people getting ill?

Yes, that's true for all infectious diseases. The wealthier one is, the safer one is. Rich people can stay at home. They can afford it. The poor can't. They have to go to work to survive.

As somebody on the front line, are you seeing a lack of government support?

As an infectiologist on the front line, I'm very dispirited. It's regrettable that for the government, community is not a priority. It is not prioritizing what it should, and that's very sobering.

Now that there's a doctor at the head of the Health Ministry, is there more hope?

If he can actually do his work, then yes. But we know that in such posts, political commitments are more important than a person's expertise. I can only hope that the new health minister will have the freedom to advocate what has to be advocated. I hope that he won't become a puppet of individual political interests.

Some scientists are predicting a higher death toll. Are you a pessimist or and optimist?

I would say that we can expect a high death toll for two or three more months. There might even be 5,000 or 6,000 deaths per day.

In such a case, there would be a complete collapse. Is that going to happen?

It's not going to happen; it already is happening. The collapse happened a long time ago. We're in the middle.

In pictures: COVID has Brazil in a stranglehold

Photographer Jonathan Alpeyrie has traveled to crisis and conflict-riddled regions around the world. His latest assignment took him to Brazil, a country which has been ravaged by the coronavirus pandemic.