President Michel Temer has been charged with corruption and money laundering. He loses his immunity when he leaves office at the beginning of 2019. 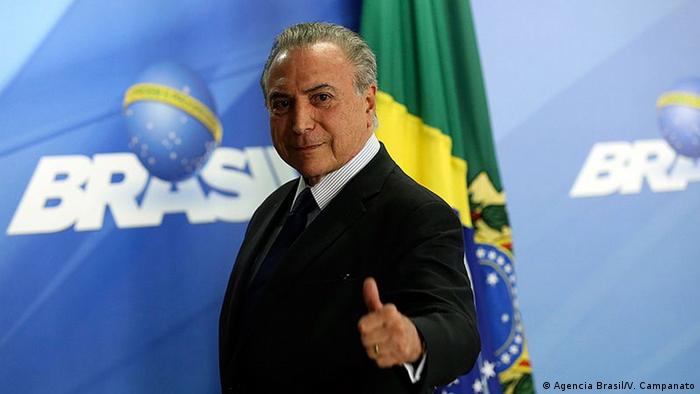 Brazil's prosecutor general, Raquel Dodge, on Wednesday charged outgoing President Michel Temer and five others with corruption and money laundering in connection to a graft investigation into the granting of port concessions in exchange for bribes.

Based on a report by the federal police, the charges allege that Temer changed laws to the benefit of some companies in the port sector in exchange for kickbacks.

Among the companies alleged to have benefited was Rodrimar, which operates the port of Santos in Sao Paulo. Rodrimar has already been indicted for paying bribes to Temer, who allegedly received about $8.3 million (€7.3 million) in kickbacks.

The charges allege Temer was paid through companies owned by friends.

Temer, whose term ends on January 1, has denied any wrongdoing in the case.

The investigation of the ports decree was opened in September 2017, relying on testimony of witnesses who pointed to Temer's role.

Since he assumed the office in mid-2016, Temer has been the target of two formal complaints filed by the attorney general's office before the supreme court.

However, in both cases the lower house of parliament refused to revoke his immunity from prosecution. He will lose immunity when President-elect Jair Bolsonaro takes office at the start of next year.

Four former presidents and the opposition leader are currently under investigation in the Odebrecht graft scandal. The deal commits the construction giant to provide information about bribes it paid to officials. (09.12.2018)

Ex-President Lula applied for release from jail pending appeal after a surprise ruling allowing it. But the chief justice of the Supreme Court took just hours to overturn the decision. (19.12.2018)

Brazil's president Michel Temer has successfully blocked corruption charges in Congress. In a vote, the legislature decided not to suspend Temer and ask the Supreme Federal Court to try him for bribery. (02.08.2017)