A Brazilian Supreme Court judge has ordered an investigation into a possible "arbitrary execution" of suspected drug traffickers during what human rights groups called the deadliest police raid in Rio de Janeiro. 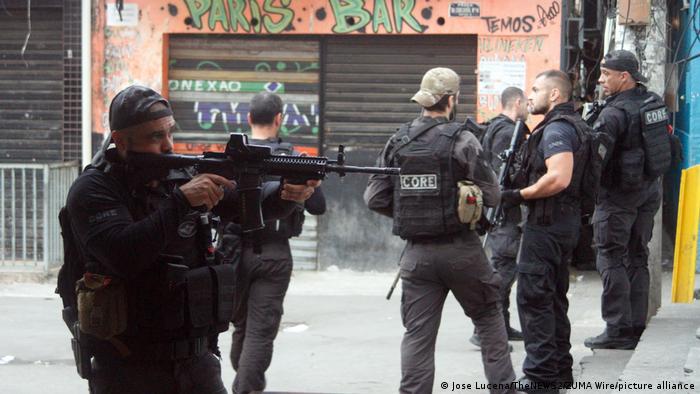 Police in Brazil on Friday were accused of human rights abuses and extrajudicial killings during an hour-long gun battle in a Rio de Janeiro favela the previous day that left 28 people dead.

A Supreme Court Justice on Friday called for an investigation into the police raid which rights groups said was the deadliest ever in a city notorious for its violent crime.

"The events reported appear extremely serious. In one video, there is evidence of acts that, in theory, could constitute an arbitrary execution," he said in the letter to the prosecutors.

Hundreds of protesters gathered outside the police headquarters near Jacarezinho to denounce the violence, carrying banners that read: "Stop Killing Us!"

Witnesses said the northern neighborhood resembled a war zone, with bodies piled up on the streets and pools of blood flowing out of apartments.

"They would have surrendered, but the police came in to kill, kill, kill. Twenty-five mothers crying. I want my son," said Adriana Santana Araujo, 36, mourning the loss of her 23-year-old son. 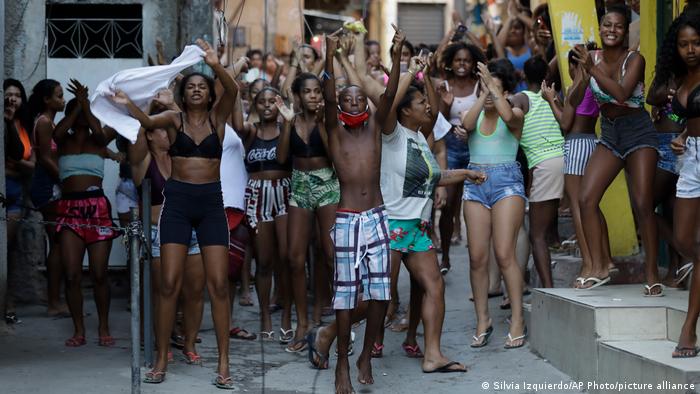 Local activists and protesters denounced the police violence in the Jacarezinho favela of Rio de Janeiro.

Daniele dos Santos said her 32-year-old husband had gone out to buy bread and was caught in the crossfire.

"He got a bullet in the leg and the cop ended up executing him. He was alive. He wasn't armed. He was just in the wrong place at the wrong time," she said.

She added that her husband was in construction and worked at a pizzeria, was not involved in crime.

When the fighting stopped, one police officer and 27 people described by authorities as "criminals" were among those killed.

Rio police had identified the 48-year-old officer who was shot in the head, but none of the others killed in the operation.

They are now facing mounting calls to prove that the suspects were, indeed, "criminals," and why they were killed and not arrested.

A funeral for the officer was held with a cortege of some 300 police cars blaring their sirens in an emotional tribute.

The police deny any wrongdoing, asserting that the officers followed protocols and fired only to defend themselves.

"There were no suspects killed. They were all traffickers or criminals who tried to take the lives of our police officers and there was no other alternative," Felipe Curi, a detective in Rio's civil police said at a news conference.

The inner circle of President Jair Bolsonaro, a former army captain who ran for office on a pro-gun, pro-security platform, was also quick to rally behind the police officers.

His vice-president Hamilton Mourao, an army general, said the suspects killed in the operation were "all bandits."

Bolsonaro's son Eduardo, a congressman, slammed those questioning the police as "bums."

"There's a police officer murdered, and they defend the murderers," he wrote on Twitter.

The far-right president has frequently advocated diminishing legal constraints on officers' use of lethal force against criminals.

The United Nations and Amnesty International have condemned the police operation, expressing shock and outrage.

Rupert Colville, the spokesperson for the UN High Commissioner for Human Rights said his office was "deeply disturbed" by the killings and called for an "independent, thorough and impartial investigation" into the raid.

Amnesty dubbed the police operation as "reprehensible and unjustifiable."

"The Rio de Janeiro state prosecutor's office must conduct a prompt, exhaustive, independent, and effective investigation into these atrocities, following international standards so that the agents of the state who ordered, committed, or participated in this massacre are held accountable and face justice," it said in a statement.

A booming construction industry is leading to the depletion of the world's sand stores. Could a more circular economy help protect natural resources?