Brazil: 16 dead after bus plunges off bridge in Minas Gerais

In addition to the fatalities, 27 people were injured after the bus careered off a viaduct near the town of Joao Monlevade in southern Brazil. The accident occurred due to a suspected brake failure, officials said. 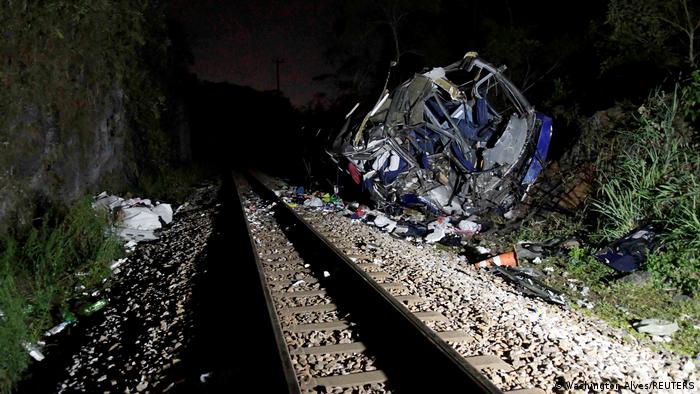 A bus in Brazil plunged off a viaduct from a height of 20 meters (70 feet) after a suspected brake failure caused the driver to lose control, before it crashed onto rail tracks below, killing at least 16 people, officials said on Friday.

Twelve people perished at the scene while four more died in hospital from injuries sustained in the tragedy, news portal G1 reported, citing the fire department.

Another 27 people were hurt in the accident near the town of Joao Monlevade in the southeastern state of Minas Gerais.

Romeu Zema, the governor of Minas Gerais, tweeted: "Stunned. All my solidarity with the family and friends of the victims of this sad tragedy."

Photos released by firefighters showed the smoking bus on its side atop train tracks beside the Piracicaba River.

Six people managed to scramble out of the bus before it fell, the driver among them, the fire department said.

On November 25, a total of 41 people died when a truck and a bus crashed into each other near the city of Taguai in the state of Sao Paulo.

Between 2015 and 2019, an average of 30,000 people died every year in road accidents in Brazil, according to transport officials.

Julieta is 14 years old and rescues turtles as a volunteer on Curaçao in the Caribbean. The island off the coast of Venezuela is feeling the impact of climate change and pollution.