Brands warn problems could see them quit Cambodia | Asia | An in-depth look at news from across the continent | DW | 28.05.2014 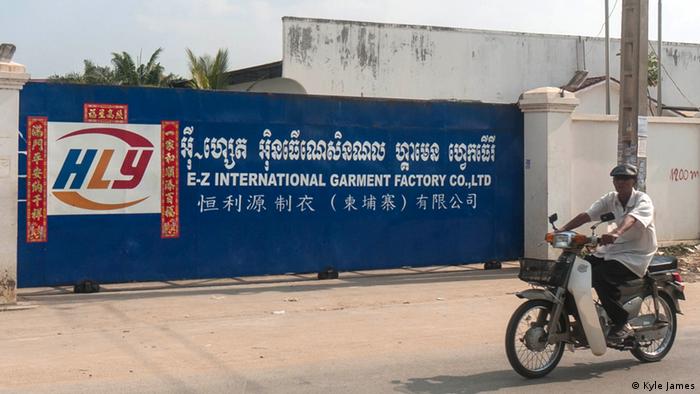 That is why representatives from 30 brands, including H&M, Puma, Gap Inc, Inditex and Levi-Strauss, sat down with senior government officials on Monday, their second such meeting this year. Also present at the closed-door meeting was the IndustriALL Global Union, an affiliation of more than 50 million workers in over 140 countries.

In a joint statement released late Tuesday, the brands and IndustriALL said they had told the government that consumer pressure in their home markets against serious rights abuses in Cambodia, as well as the sector's ongoing instability, meant Cambodia was "at risk of losing its status as a strategic sourcing market, with an impact on future investment and growth."

They also told officials that troops who opened fire on workers during violent protests in January, killing at least four, "should be brought to justice," and warned they would not tolerate the authorities using violence to shutter peaceful strikes and demonstrations by workers. 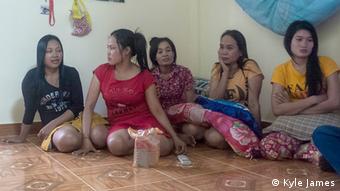 In addition, they told the government that the current trials of workers and unionists "must be based on evidence and stand up to international scrutiny to build trust and confidence," and called on the authorities to drop a swathe of lawsuits filed against unions and union leaders.

'Not a living wage'

The demands represent a pivotal moment in Cambodia's relations with international brands, which on Tuesday also met with representatives from the Garment Manufacturers' Association in Cambodia (GMAC), the grouping of 400-plus factories to which the brands subcontract production.

"It's not a living wage. And that is why people work 10-14 hours a day," said Raina, who took part in the two days of meetings. "It's very important to find a path now towards a living wage that covers the basic needs and makes it possible for people to have a life."

To achieve that, brands have told the government and GMAC that they are willing to pay more to local suppliers - GMAC's members - to ensure a rise in the minimum wage. They also called on the government to move faster in instituting an improved minimum wage system.

Raina said months of bad news emanating from the garment sector - including January's killings of workers that the Cambodian government has not investigated, as well as unceasing legal cases against union officials - had resonated badly in the rich markets of the west, where most exports are sent.

"The brands are very dependent on their image," he said. "Consumers are asking questions, and it's not good news for sales or reputation if the media reports - as they regularly do - about violations of workers' rights, slave labour wages as Pope Francis called them, and otherwise long working hours and unsafe and unhealthy work places." 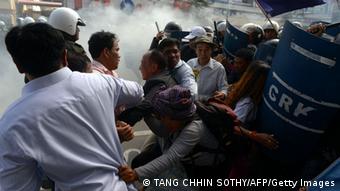 Raina also pointed out that, from the brands' perspective, the ongoing strikes were undermining the stability that they need to place orders.

"If there is unrest, then that of course causes problems because they don't get their products," he said.

No shortage of woes

In 2012 and 2013, industrial action cost Cambodia's garment sector more than 1.4 million days of production, according to GMAC's figures. By comparison, the sector lost 1.9 million days in the entire nine-year period prior to that.

Low wages are the central issue facing the sector - most of whose output is sent to the US and the European Union - and workers' earnings have declined in real terms over the past decade. In December, frustrations came to a head and hundreds of factories were shuttered as tens of thousands of workers walked out in a bid to get the government to hike the monthly minimum wage to 160 USD.

Many workers stayed on strike despite the government's decision to raise the minimum wage from $80 to $100. Workers complain that, even at that higher level, they are forced to work overtime simply to make ends meet. The Ministry of Labour's own figures show garment workers need around $160 a month to get by.

The ongoing strikes culminated in two days of violent protests in January, during which the authorities shot dead at least four people. A further 23 were arrested and charged with an array of offences; a verdict against those defendants is due on May 30 in a case that rights groups have decried as spurious and a farce.

Since January's violence, dozens of unionists and workers have been charged with offences; others have been fired, while the military has forced employees back to work, and factories have filed lawsuits against some union leaders.

All this, said Raina, constituted "a grave attack on union and worker rights," adding in a separate statement that brands and unions wanted to see the end of lawsuits that have been brought against unions and their leaders, a process, he said, that has been driven by GMAC.

"If GMAC are serious about functioning industrial relations, they must get rid of the court cases," he said. "Brands and unions want to see a thriving garment industry in Cambodia but with living wages and union rights."

Trial has begun in Cambodia for 23 people charged with violence and property damage during a January protest by garment workers in which police shot at least four dead. Rights groups have criticized the prosecutions. (25.04.2014)

The conflict over raising the minimum wage in Cambodia's textile industry reflects a growing power struggle between the government and the opposition, which might throw the nation into a political deadlock. (19.03.2014)

Dave Welsh, the country representative for the Solidarity Center, a US-based non-profit that focuses on labour rights, told DW that the overwhelming importance of the garment sector to Cambodia's economy meant that it is in the government's and GMAC's interest "to listen fairly clearly to what the major brands are saying."

"This is the second time [the brands] have done this [meeting] in four months, which demonstrates a level of seriousness and urgency," he said. "Frankly, this is a pivotal week in terms of how the situation will unfold."

Welsh said the government and industry could resolve the situation with three simple steps: "[Releasing] these 23 people; a serious commitment to move on the living wage issue; [and] ceasing and desisting on this legal assault on trade union leaders and trade union rights."

Should it not do so, he added, "I suspect there'll be very negative consequences."

Welsh said a key reason brands source from Cambodia is due to its low-risk reputation gained through the International Labour Organization's Better Factories Cambodia program. That program is designed to ensure a model industry by upholding worker rights and safety.

"[But] that reputation has been really destroyed, I would say, over the last four months," he said, adding that Cambodia is at real risk of brands leaving should the public relations value of sourcing from here diminish. "If it's no longer … [a] model industry, then it makes the overall situation very vulnerable." 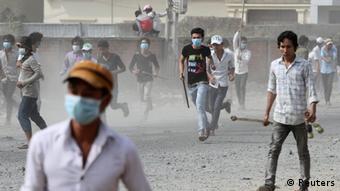 A spokesperson for Swedish firm H&M confirmed by email that the company had taken part in this week's talks. H&M would not comment on the meetings, but did say it was keen to continue sourcing from Cambodia.

"It is in the Cambodian textile industry's [interest] as well as in H&M's interest that the industry continues to develop to an advanced and mature textile industry," the spokesperson said. "We are dependent on stable markets in which people are treated with respect."

Union leader Ath Thorn, who heads the independent union C.CAWDU - and who has himself been targeted by the courts in recent months - told DW that he hoped the solutions raised at this week's meetings would be implemented, and would improve conditions in the sector and go some way towards restoring Cambodia's image as a reliable country from which to source.

And, he added, the issues affecting the country's neighbours - a military coup in Thailand and an anti-China backlash in Vietnam - could ultimately benefit Cambodia should it be able to act quickly.

"In this situation now, Vietnam and Thailand have a lot of problems," he said. "If the government can take the opportunity to be better in Cambodia, maybe we can get more business."

For its part, GMAC responded to the offer by brands to pay more by pointing out that not all brands have agreed to contribute, which would leave some of its member factories at risk of having to pay for any wage hike from their own pockets.

And despite the potential step forward on the minimum wage, it's far from clear that all the players are on the same page, particularly when it comes to accusations that the government is using Cambodia's pliant courts to intimidate and jail those whom it opposes - something it has a long track record of doing in other sensitive areas such as land disputes. 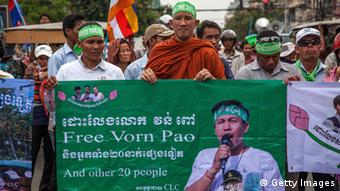 The trial for those arrested in January began on April 25

After Monday's meeting, Heng Suor, a spokesman for the Ministry of Labour, said that the government had told brands that the courts had charged only those unionists and workers who had broken the law.

Few, it seems, believe that. In the case of the trial of the 23 garment workers and unionists, proceedings were often egregious, and many observers condemned it as a farce. Cambodia's courts do not enjoy a reputation of independence from the executive.

In a separate statement issued late Tuesday, IndustriALL's Raina said brands and unions were watching Friday's verdict with keen interest, particularly given the rumours he has heard that the court will jail the defendants for between two and three years.

"If these rumours are true it will seriously damage the reputation of Cambodia's judicial system internationally, and who knows what reaction it will generate on the streets of Phnom Penh," he warned.