The conflict over raising the minimum wage in Cambodia's textile industry reflects a growing power struggle between the government and the opposition, which might throw the nation into a political deadlock. 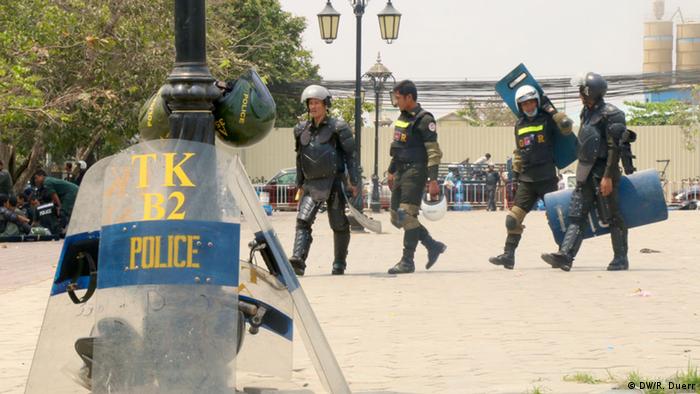 Textile workers in Cambodia have been demonstrating for weeks demanding a monthly minimum wage of around 115 euros. Violent clashes broke out during protests that took place last December and in January. According to human rights organizations, five protesters were shot dead by the police and many more were seriously injured. Twenty-three people were arrested.

David Welsh of "Solidarity Center," a labor rights organization in Phnom Penh, is concerned about the recent developments. "This is a gross violation of trade union rights in the largest and most important economic sector of the country. This has nothing to do with the rule of law," said Welsh.

More than half a million workers are employed in Cambodia's textile industry. With total revenues amounting to around 5.5 billion USD, the sector generates some 80 percent of the Southeast Asian nation's export earnings. 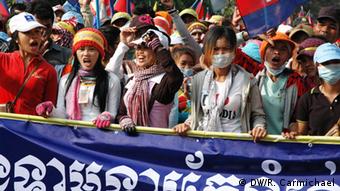 Protests broke out in December and January over the minimum wage

However, real wages in the sector haven't risen for years. Women account for more than 80 percent of the textile industry's workforce. Van Thina is one of them: She works more than 60 hours a week and makes just over 70 euros a month.

"How will I ever support a family if my salary is not even enough for me to survive on?" asks the 18-year-old. The textile worker says she will take part in a strike set for next month, despite the fact that such a step could cost her her job. Textile workers in Cambodia are usually hired on short-term contracts and they generally lack career opportunities in factories.

Ken Loo, Secretary General of the Garment Manufacturer's Association of Cambodia (GMAC), is mainly concerned about the investment climate in the industry and therefore adheres to the government line. "These illegal strikes are organized by the trade unions that only represent a minority of the branch workers," Ken told DW, adding that it is the responsibility of the government "to enforce the law and bring those responsible to justice."

Last autumn, the Cambodian government set up a commission to stipulate a statutory minimum wage for the textile sector. The commission's report concluded that, depending on the location of the factory, the living wage should range between 111 and 127 euros. But the minimum wage for workers at the beginning of this year was set at only 73 euros.

"The government has ignored the findings of its own commission. Because of this, the unions called for protests. Although political parties took the topic on board, the demonstrations were controlled solely by workers," said activist Welsh.

But the conflict over the minimum wage also reflects the power struggle between the government and the opposition. Prior to the July 2013 parliamentary elections, the opposition "Cambodia National Rescue Party" (CNRP), led by Sam Rainsy, had already promised to double the minimum wage. But despite a vast majority of the textile workers number voting for CNRP, the party lost the poll. 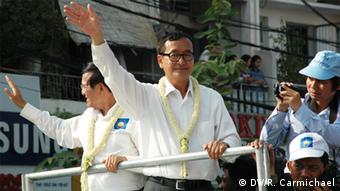 The opposition CNPR, led by Sam Rainsy, has pledged to support the textile workers

"These elections were neither free nor fair," criticized Mu Sochua, the most prominent female politician within the CNRP, adding that the party will continue supporting the textile workers.

"Of course we could also turn the issue to our own advantage as the bulk of the workers sides with us, and we have a lot of power to even win this fight." However, Sochua added, this would only lead to renewed violence, "and that is not in our interest."

Over the past couple of months, the opposition has repeatedly called for new elections, but the government has refused to give in, thus creating a political deadlock. "The political component makes this conflict even more complicated. But the situation will further escalate if a solution isn't found anytime soon," said Welsh.

No immediate threat to PM

The growing unrest among textile workers may pose a challenge to the rule of Prime Minister Hun Sen, who has been in power for almost three decades. However, Naly Pilorge, director of the Phnom Penh-based human rights organization LICADHO, disagrees: "The government controls all institutions in this country, including the civil society. It's difficult to bring about sudden change to this long-established balance of power." 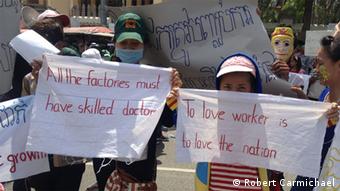 Mu: "The textile workers are currently fine-tuning their strategy"

In order to offset the lack of rule of law, she argues, foreign brand manufacturers would have to take responsibility, as they can exert the necessary pressure to bring about changes throughout the industry and also demand fair working conditions for employees.

In the meantime, opposition politician Mu Sochua is confident that the laborers will achieve their goal. "The textile workers are currently fine-tuning their strategy. We stand by them and we will win one day. We are in control. It is just a matter of time and time is on our side."

Cambodia has been ruled for nearly 25 years by Hun Sen. His biggest rival is Sam Rainsy, who, in his struggle for power, has made use of widespread racism toward the Vietnamese. (05.03.2014)

The Asian Development Bank has released a damning internal review that concludes the bank’s staff significantly harmed some of Cambodia’s poorest citizens with an ill-conceived and mismanaged resettlement plan. (10.02.2014)