Bosnia has prepared heated tents for around 900 migrants, who were stranded in a snowstorm after their camp burnt down. The Balkan country has received criticism for leaving refugees unsheltered. 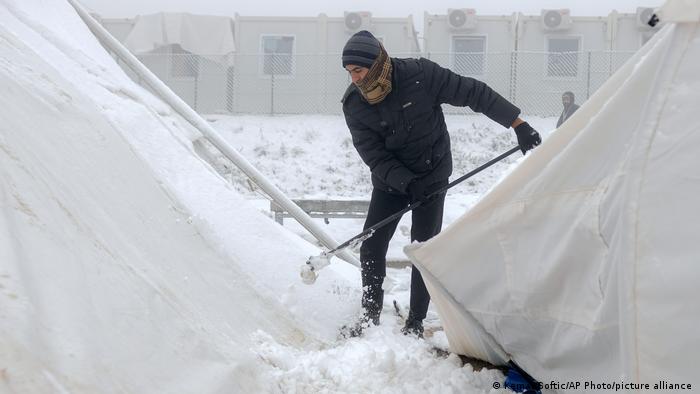 Bosnian officials have started moving migrants into heated tents after a snowstorm hit the Lipa camp, outside the northwestern city of Bihac, a UN migration official said Friday. A fire had destroyed the camp on December 23, leaving hundreds of refugees in tough weather conditions.

There were enough tents to shelter some of the migrants on Friday and the rest would go up on Saturday, the head of the International Organization for Migration in Bosnia, Peter Van der Auweraert, said on Twitter.

Authorities said they have prepared around 20 tents with enough capacity to accommodate some 900 people, who gathered around fires to warm up, some without jackets or socks.

A Pakistani refugee at the destroyed camp said he had not taken a shower for several days and was living without water and electricity.

"Please stand with us and help us. We are in a very, very bad condition,'' Mohammad Afsal told AP.

The Red Cross has been distributing food to the stranded refugees, a local official said.

The IOM had withdrawn from the camp due to its poor conditions, saying that it was not equipped for cold weather.

Bosnian police said they believed camp residents had started the fire in December to protest the IOM's withdrawal from the site.

Authorities had rejected an IOM request to move people at the camp to a reception center in an abandoned factory.

Bosnia said it would instead build infrastructure in the destroyed camp, starting in April.

Bihac's mayor recently accused IOM of inciting the Lipa camp disaster. Bosnian local officials reportedly believe that the EU has not helped their country enough in the face of a refugee crisis.

The European Union has described Bosnia's migrant situation as "alarming," after the bloc had assisted the Balkan country with at least €85 million since 2018.

What will the EU do to help migrants stranded in Bosnia?