A London court has heard that Boris Becker is refusing to handover his tennis trophies in a bankruptcy case. Trustees attempting to secure his assets have allegedly faced some roadblocks. 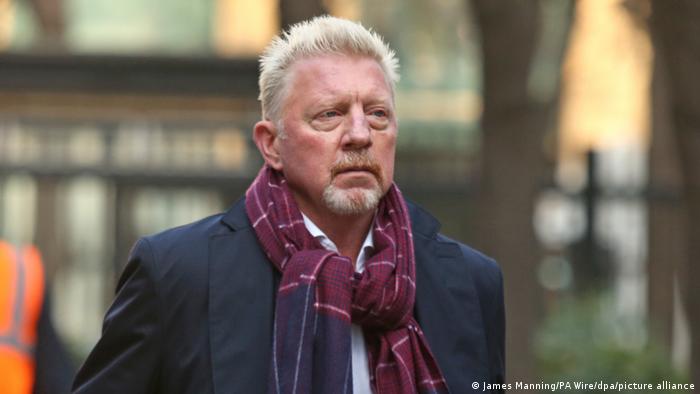 Boris Becker has somewhat fallen from grace since his career peak

German tennis legend Boris Becker is refusing to hand over trophies after declaring bankruptcy, a London court was told on Tuesday.

The 54-year-old former Wimbledon champion is facing court over 24 offences related to his 2017 bankruptcy, which he declared over a 3.5 million GBP ($4.6 million, €4.2 million) bank loan for a Spanish property.

The court heard that Becker had failed to hand over nine of his tennis prizes, including two of his three Wimbledon singles titles, his Australian Open prize and his 1992 Olympic gold medal.

'Fanciful' claim he doesn't know where his trophies are

"Mr Becker has maintained throughout he does not know where these items are," prosecutor Rebecca Chalkley told the South London jury. "It is the prosecution case that this is fanciful and, in fact, he is deliberately withholding them."

The former world number one and six-time Grand Slam champion had told trustees attempting to secure his assets that one of his Wimbledon titles was in the Tennis Hall of Fame, another was with the German tennis federation, and the third had been given to his mother. He also said the missing prizes did not hold significant value or interest to him.

"Bearing in mind what they represent in terms of achievement and sacrifice for Mr Becker over the years, that they were not of great interest, regardless of their monetary value, lacks credibility," Chalkley said.

"These trophies are some of the most significant in Mr Becker's career and arguably reflect the awards that made him the tennis star he is today.

"Therefore, it is not credible to say he did not know where they were."

He has also been accused of hiding other assets and income, including €1.13 million from the sale of a Mercedes dealership in Germany. The court heard this money was paid in a business account that he was treating as a private "piggy bank."

Other interests at stake include a London flat, an €825,000 bank loan, and substantial sums paid to his ex-wife Barbara Becker, as well as estranged wife Sharlely "Lilly" Becker" and a friend. Also of interest are €300,000 transferred to his own account, large sums spent at fashion outlets, and school fees and funds transferred to a joint account held with his son Noah.

Becker, who won 49 singles titles during his 16-year playing career, denies all the charges against him.

The trial will likely last for up to three weeks.