The editor of the French satirical weekly Charlie Hebdo's last book defends people's right to poke fun at religion. That's what he did in the treatise, published three months after he and several others were murdered. 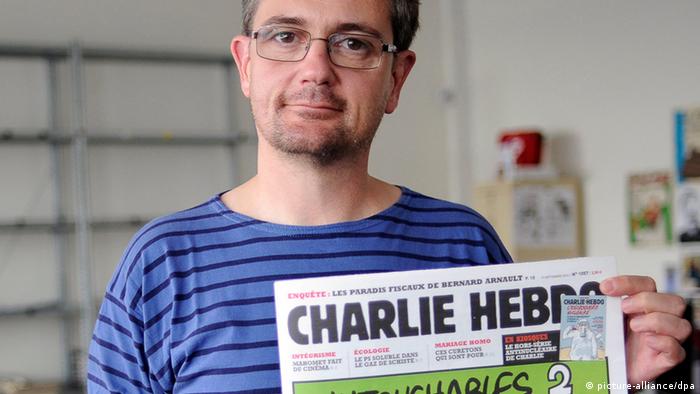 Stephane Charbonnier, also known as "Charb," completed the short book, entitled "Letter to the Islamophobia swindlers who play into the hands of racists" just two days before he was shot dead in January.

In the book, which hit French newsstands on Thursday, Charbonnier accused left-wing activists, media and politicians of engaging in a misguided battle, saying that "a lot of those who campaign against Islamophobia don't actually do it to defend Muslims as individuals, but to defend Prophet Mohammed's religion."

He pointed the finger at the media for helping popularize the term "Islamophobia," arguing that "any scandal that contains the word 'Islam' in its title sells. A terrorist is scary, but if you add that he's an Islamist, everyone wets themselves."

Charbonnier also uses the book, excerpts of which were published in Wednesday's edition of "Le Nouvel Observateur," to criticize Muslims and Christians alike.

In defense of satire

The essay also defends Charlie Hebdo's editorial policy of lampooning world religions, including the publication of caricatures of Muhammad, something some Muslims regard as offensive.

"The suggestion that you can laugh at everything, except certain aspects of Islam, because Muslims are much more sensitive than the rest of the population - what is that, if not discrimination?" he wrote.

Then, on January 7, he and nine other cartoonists were shot dead by two gunmen who had burst into the Paris headquarters of Charlie Hebdo. The two French brothers of Algerian descent, Cherif and Said Kouachi also killed a maintenance worker and a policeman. Several others were wounded in the attack.

Police raids have ended two Paris hostage situations. Two men suspected of the Charlie Hebdo attack as well as a third holding several captives in a Jewish supermarket were killed. (09.01.2015)

Editorial boards and TV networks have spent the last two days struggling with the dilemma of whether to air or print Charlie Hebdo's contentious Muhammad cartoons. DW examines a legal and ethical minefield. (09.01.2015)