Police raids have ended two Paris hostage situations. Two men suspected of the Charlie Hebdo attack as well as a third holding several captives in a Jewish supermarket were killed. 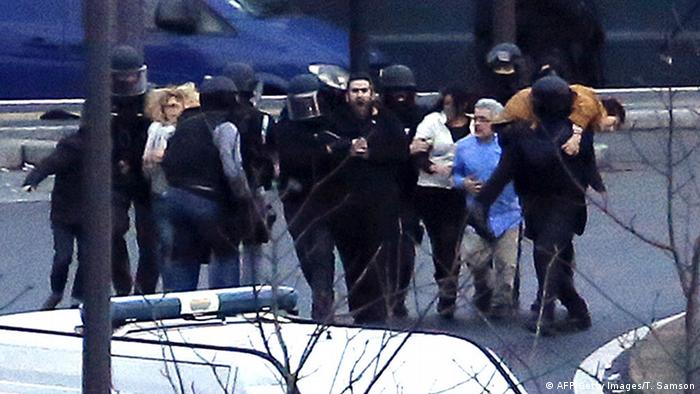 All updates in local time in France (CET), one hour ahead of Universal Coordinated Time (UTC).

19.30 A host of European leaders, including German Chancellor Angela Merkel, have said they will take part in a march of support for the victims of Thursday's massacre in Paris on Sunday.

18.31 French President Francois Hollande says he will make a national telvevised address at the Elysee Palace , in the wake of the hostage drama that had come to a close moments before the announcement.

17.20 The two suspects in Thursday's Charlie Hebdo shootings have been killed in a police assault on the industrial building where they were holed up, the AFP news agency and the German press agency (dpa), report. Frenche daily Le Monde has reported that the gunman at the Jewish supermarket, in an unrelated shooting and hostage situation, site has also been killed.

DW reporter Georg Matthes was outside the supermarket at the time of the assault.

16.58 Explosions reported at Jewish supermarket hostage site. Police and eyewitness reports said smoke could be seen emanating from building where hostages were being held.

16.49 AFP reports police sources saying that the gunman holding at least five hostages in a kosher grocery store has threatened to kill them if French authorities launch an assault on the two Charlie Hebdos hooting suspects who have been cornered.

16.25 A meeting between French President Francois Hollande and German Chancellor Angela Merkel, which was planned to take place in Strasbourg on Sunday, has been postponed in light of the Paris attacks.

15.53 Police order all shops in central Paris' main Jewish neighborhood to be closed. The French Interior Ministry denies press reports that two people have been killed, according to Reuters news agency.

15.16 The AFP news says grocery store hostage-taking suspect Coulibaly was seen with Charlie Hebdo suspect Cherif Kouachi in 2010 during an investigation into an attempted prison break in France. The 32-year-old Coulibaly was convicted for his role and is said to have been well-known to anti-terrorist police.

14.54 The Reuters news agency says one person has been seriously wounded, with six being taken hostage in the Paris grocery store standoff. 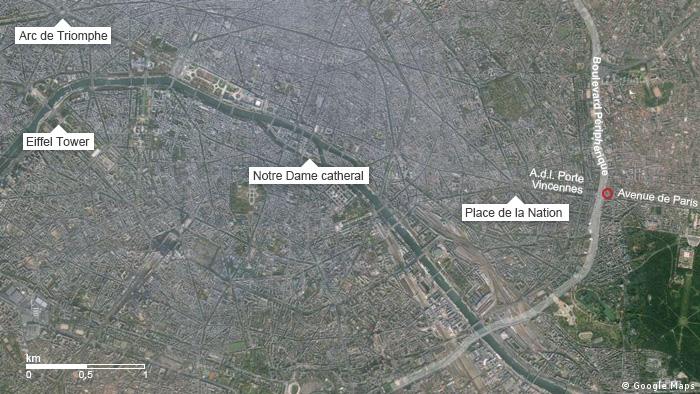 14.53 The AFP news agency names the suspects in the death of a policewoman, thought to be involved in the grocery store standoff, as Hayat Boumeddiene and Amedy Coulibaly.

14.50 Max Hofmann reporting live from the Dammartin: "I talked to (another) police officer who said they really can't make any prediction as to how long this is going to take because, of course, their first and foremost goal is to get everyone out of there safe and to get the two suspects out alive."

14.28 Authorities in Dammartin-en-Goele have started to evacuate schools in the northern French town, although the suspects are still said to be cornered. Until now, schools have been placed under lockdown, says DW's Max Hofmann.

14.28 French media report that at least two people have died in a shootout and standoff at a Paris grocery store.

14.04 A police official says there are multiple hostages in the supermarket and at least one person has been wounded. 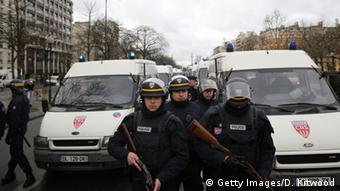 13.56 AFP reports that the gunman has taken at least five hostages at the supermarket in the east of Paris. Earlier, RTL French radio cited a source who said a woman and a child had been taken hostage.

13.54 An unconfirmed report emerges that the hostage-taker at the supermarket is the person police were looking for in connection with the killing of a policewoman in a southern Paris suburb on Thursday.

13.51 Live footage from the area shows at least 20 police officers, many of them in body armor, gathered near the kosher supermarket.

13.48 French media report that gunshots have been fired in the second hostage-taking.

13.32 The AFP news agency reports that the hostage-taking in the east of Paris took place at a kosher grocery store.

13.26 Initial reports emerge in the French media of a new hostage-taking in Paris. 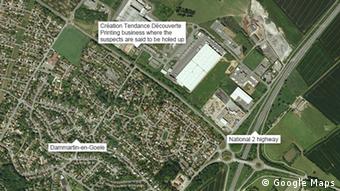 13.08 A spokesman for the French Interior Ministry says the priority of security forces is to establish dialogue with the Charlie Hebdo suspects.

12.57 Children are being evacuated from three schools near the industrial zone which has been surrounded by police in Dammartin-en-Goele, according to a statement posted on the municipality's website.

12.43 Several hours into the operation, the Associated Press cites a lawmaker inside the French command post, who says the terror suspects have told officials that they want to die as martys.

12.30 French police say there was a "connection" between the fatal shooting of a policewoman in Montrouge south of Paris on Thursday and the two suspects in the Charlie Hebdo killings.

11.56 The business where the gunmen are thought to be located is identified as printing house Creation Tendance Decouverte.

11.23 A spokesman for the French Interior Ministry tells news broadcaster BFMTV that there is "near certainty" that the two brothers sought in the Charlie Hebdo building were in the building.

11.15 French President Francois Hollande calls for tolerance in the aftermath of the Charlie Hebdo attacks. "France has been struck directly in the heart of its capital, in a place where the spirit of liberty - and thus of resistance - breathed freely," he tells reporters. 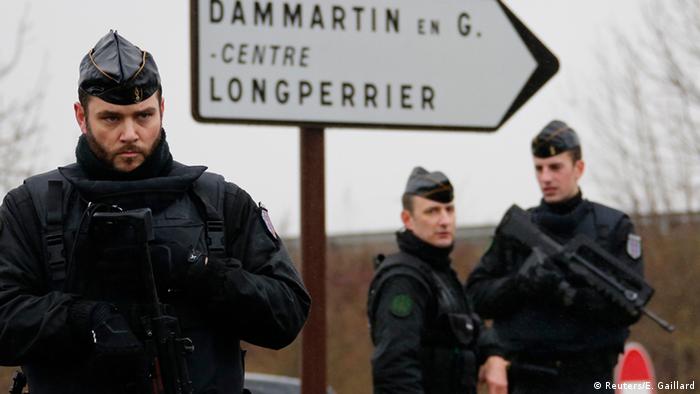 11.07 The helicopters seen hovering earlier are now down on the ground. It is understood negotiators are trying to speak to the suspects. Police have been deployed to the area in large numbers, gathering people working and living nearby.

10.54 French police report that a suspect has been identified in the fatal shooting of a policewoman in Montrouge, southern Paris, on Thursday.

10.43 A police source tells the AFP news agency that the suspects are holding one hostage at the building in Dammartin-en-Goele. The site is close to Paris' Charles De Gaulle International Airport. 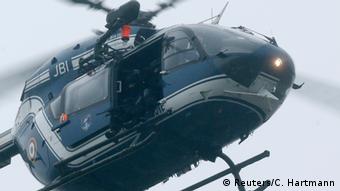 10.32 French Interior Minister Bernard Cazeneuve: "An operation is underway which is set to neutralize the perpetrators of the cowardly attack carried out two days ago."

10.31 It is understood the building involved is a small business specializing in printing and advertising. Helicopters are hovering overhead.

10.19 A senior Yemeni intelligence officer tells the Reuters news agency that one of the two brothers, Said, met the deceased al Qaeda leader Anwar al-Awlaki on a visit to Yemen in 2011. He is said to have taken part in military training there.

10.18 The Paris prosecutor's office denies that a person was killed in a shootout at Dammartin-en-Goele.

10.04 One person is reported to have been killed and several injured in a shootout ahead of the hostage taking. The Reuters news agency claims two people have been killed.

10.00 Five helicopters are seen flying above an industrial zone outside Danmartin-en-Goele. The gunmen are believed to have taken refuge in a building occupied by a private business. It remains unknown whether there were any hostages.

09.52 French Interior Minister Bernard Cazeneuve says an operation is underway to detain the two brothers suspected in the Charlie Hebdo attack. The minister spoke moments after an emergency meeting with the president, prime minister and top police official. The brothers, Charif Kouachi, 32, and his brother Said, 34, are reported to have stolen a Peugeot amid gunfire.

09.40 The AFP news agency reports that hostages had been taken near Dammartin-en-Goele, although it was unable to specify the number of people taken.

09.34 Somali militants al Shebab have praised the massacre at the offices of satirical magazine Charlie Hebdo on Wednesday as a "heroic act."

09.20 Reports emerge that shots have been fired in a car chase northeast of Paris, in the French town of Dammartin-en-Goele, some 40 kilometers (25 miles) from the city. The drama unfolded on the National 2 highway some 48 hours into the manhunt following a chase. The pair were spotted a day earlier to the northeast of Paris.