Car bombs have killed at least 35 people in Shiite parts of Baghdad and on its outskirts. The US military says it has dropped supplies to Iraqi troops in northern Iraq and made airstrikes against "Islamic State" units. 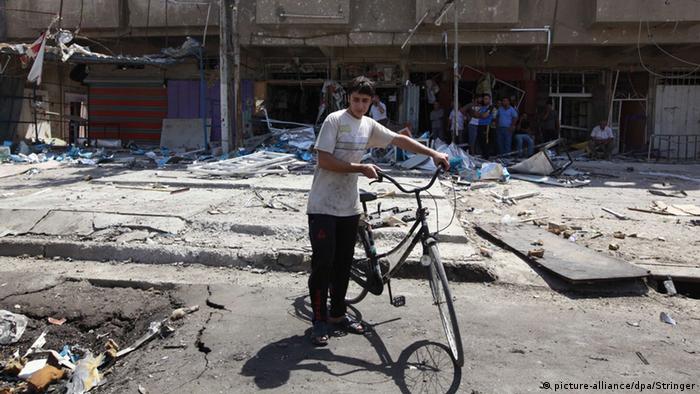 An ice cream shop in Baghdad was among three locations devastated by suicide bombers on Saturday. The blast killed eight people and left a further 18 wounded, police and medical officials said.

The attack happened in a shop-lined street in the Iraqi capital's Shaoula neighborhood.

Another bomber blew up his vehicle at a traffic roundabout in Baghdad's northern farming district of Kadhimiya, killing 11 people, three of them police officers. Officials said another 27 people were wounded.

Hospital officials - speaking on the condition of anonymity -- confirmed the casualty figures.

There were no immediate claims of responsibility for the attacks - the latest in a string of bombings in the Iraqi capital.

IS units targeted in airstrikes

The US Central Command said the US and Dutch militaries had targeted units of the jihadist "Islamic State" (IS) group on Saturday during airstrikes near the northern Iraqi city of Tal Afar and northwest of Hit in Anbar province.

Last week, IS fighters seized towns near Hit, sending Iraqi soldiers fleeing and leaving a stockpile of weapons at risk of capture.

The US military said its aircraft had also made supply airdrops to Iraqi forces controlling Baiji, which lies 180 kilometers (110 miles) north of Baghdad, at the request of the Iraqi government.

The IS holds swaths of northern Syria and northern Iraq, including Mosul.

The news agency AFP reported on Saturday that it had been told by rights activists and relatives that the IS group had executed at least four women this month.

IS militants have used Mosul, Iraq's second largest city, as a hub since June, when the jihadist group seized large areas of land in five northern and western Iraqi provinces, obstensibly to create a "caliphate" extending into Syria.

The IS had beheaded a number of journalists in Syria, claiming these to be in retaliation for the US-led airstrikes in Iraq and Syria.

Iraq talks wrap up with pledge of military aid

Foreign ministers from nearly 30 countries pledged in Paris to combat the terror group "Islamic State" in Iraq and Syria. However, no mention was made of specific combat plans to tackle the jihadist group. (15.09.2014)

A German cargo plane carrying military equipment - but not weapons - has landed in Iraq to be delivered to Kurdish fighters. It remains unclear when the Kurds will receive the German guns they have been promised. (05.09.2014)