Dozens of people have died in a series of bombings in Iraq, in what appear to be reprisals for a deadly shooting at a Sunni mosque on Friday. The sectarian strife could hinder an already fragile political transition. 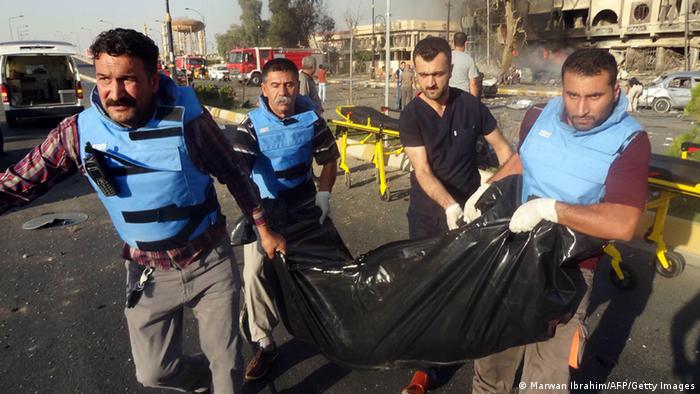 Bomb attacks in the capital Baghdad and the northern city of Kirkuk killed at least 30 people on Saturday, according to local police and news agency reports.

In oil-rich Kirkuk, the deputy police chief said three bombs went off in a crowded commercial district, killing 19 people and injuring another 112.

One witness told the AP news agency he heard "an explosion between the cars, and then we started carrying out the dead bodies from there while people were burning inside the shops and cars."

Earlier, in Baghdad, a suicide bomber rammed a car into a gate outside the interior ministry, killing six civilians and five security personnel. A police officer said that 24 other people had been injured.

The bombings came a day after a deadly explosion and subsequent shooting spree at a mosque northeast of Baghdad. Security officials said that attack, in a village in Diyala province, began with a suicide bombing at the entrance, followed by gunfire as worshippers rushed out of the mosque.

At least 70 people were killed in the mosque attack. Twenty other people were said to have been seriously injured.

The violence comes as Iraq faces one of its deepest political crises in a decade, and as the Jihadist group Islamic State (IS) continues with advances throughout the region.

Deputy Prime Minister Saleh Mutlaq and Parliament Speaker Salim al-Jibouri, both Sunni, have pulled out of talks with the main Shiite alliance until results of an investigation into the mosque killings are announced.

If talks were to stall, it would be a major hurdle for Shiite prime minister-designate Haider al-Abadi, who is looking to unite Sunni and Shiite lawmakers in a new government by September 10.

It was unclear Saturday whether the attack at the village mosque was carried out by Shiite militiamen or IS insurgents who have been advancing into mixed Sunni-Shiite areas in Diyala. Though IS is a self-proclaimed Sunni group, their fighters have also been known to kill Sunni Muslims who refuse to submit to their harsh interpretation of the Islamic code and Sharia law.

In response to the attacks, United Nations Secretary-General Ban Ki-moon expressed deep concern about the "impact such acts of sectarian violence will have on the already grave security situation and on the political process."

The European Commission said in a statement from Brussels on Saturday that such "heinous crimes" should not stand in the way of government formation, urging all Iraqis - regardless of religious orientation - to unite against violence.

Earlier this week, a number of EU nations - including Germany - announced readiness to supply northern Iraq with weapons in a bid to stem the IS threat. That followed US airstrikes at the beginning of the month. Until now, US President Barack Obama has rejected direct intervention in Syria.

On Friday, however, a high-ranking Pentagon official said operations against IS in Syria might be necessary to defeat the militant organization. "We've made very clear time and again that if you come after Americans, we're going to come after you wherever you are, and that's what's going to guide our planning in the days to come," Deputy National Security Advisor Rhodes told reporters in Washington.