Bolivia's president has hit out at police units in four regions for rebelling against the government amid mass protests. Evo Morales could struggle to get through his fourth term without the support of security forces. 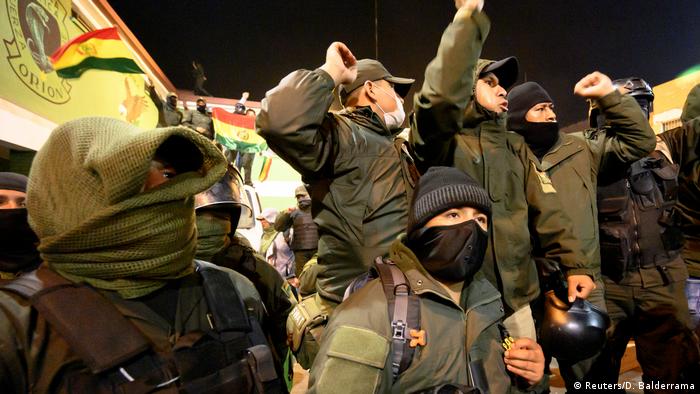 Bolivian President Evo Morales called for "urgent" talks with the opposition on Saturday, following days of unrest that included a mutiny among security forces.

"To preserve peace in our beloved Bolivia, I urgently call for talks with representatives of parties who have won seats in the elections," Morales said.

He also called on the pope, human rights defenders and international organizations to "join our complaint against anti-democratic groups that have launched a coup in Bolivia."

The Bolivian president had warned on Friday that violent groups had launched a "coup d'etat" after a police mutiny was reported in several regions.

The president's remarks followed local media reports that police units in at least four regions had decided to rebel against the government.

"Sisters and brothers, our democracy is at risk due to the coup d'etat that violent groups have launched to undermine the constitutional order," he wrote on Twitter late on Friday.

In some cases, groups of officers joined the anti-government protests that have rocked the country since Morales won a strong but disputed victory in the October 20 elections.

Bolivian television broadcast footage of police shaking hands with demonstrators in the city of La Paz — a stark contrast to the previous three nights, when the two sides clashed.

Units in the southeastern city of Sucre and the opposition stronghold of Santa Cruz said they were also joining a rebellion launched by police officers in the central city of Cochabamba.

The police mutiny is the first sign that security forces are withdrawing support for Morales, who is South America's longest-serving president, having taken office in 2006.

After an emergency Cabinet meeting on Friday, the country's defense minister said the government had, for now, ruled out a military operation against the rebellious police teams.

Earlier on Friday, the country's electoral tribunal (TSE) rejected claims that vote count irregularities had been discovered in the poll, while protesters continued their demands for a new election.

The TSE referred critics to a report by the company Ethical Hacking, which had checked the electronic vote and did not find any "alteration of the data."

But the company’s head, Alvaro Andrade, said his firm did find "vulnerabilities" in the vote count, local media reported.

Carlos Mesa, who lost to Morales in the election, has denounced the vote as fraudulent, insisting the results had been manipulated during a 24-hour period when the electoral count was suspended.

The United States, Colombia, Brazil and Argentina have also called for a second-round runoff between Morales and Mesa.

Bolivia has since been consumed by weeks of protests and rioting by opposition groups and supporters of Morales. Three people have been killed and more than 300 injured.

Unrest in Bolivia has been ongoing since President Morales' controversial reelection amid accusations of vote-rigging. The top opposition leader has arrived in the capital demanding the president's resignation. (07.11.2019)