BlogWatch: Indians talks about gay sex legislation | Asia | An in-depth look at news from across the continent | DW | 27.02.2012

Bloggers and analysts in India have been discussing the ongoing issue of petitions filed against Delhi High Court's 2009 verdict that "decriminalized" homosexuality in India. 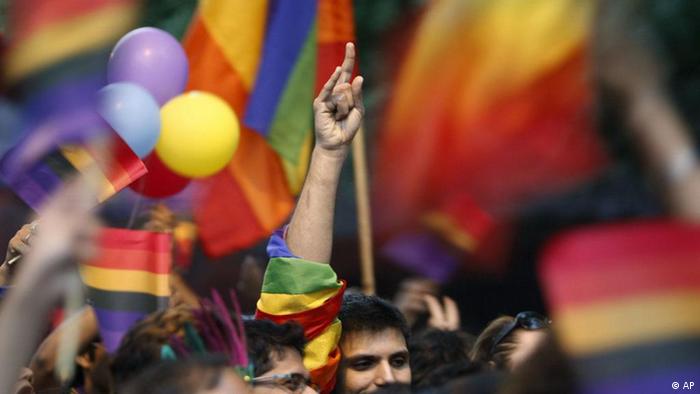 Last year, Indian Health Minister Ghulam Nabi Azad made a controversial remark about homosexuality, calling it “immoral,” “unnatural” and “a major cause of diseases,” such as AIDS. His comments triggered angry reactions from Indian lesbian, gay, bisexual and transgender activists, who said they were ''irresponsible and illogical."

India’s Supreme Court is currently hearing a batch of petitions that challenge Delhi High Court's 2009 verdict, which decriminalizes gay sex among consenting adults. Certain religious and conservative groups claim that the verdict goes against the norms of Indian society and have called on the apex court not to imitate the West.

P.P. Malhotra, a top government lawyer, argued last week that "gay sex is highly immoral and against the social order and there is high chance of spreading of diseases through such acts." He also said that India’s constitution is different, as are its moral and social values are also different. The Indian Home Ministry later distanced itself from Malhotra’s remarks, saying they did not represent the ministry's stance. Local media reported that P. P. Malhotra had based his arguments on a three-year-old script from when the Home Ministry was explicitly against the legalization of gay sex.

Meanwhile, the approach adopted by the bench of Justices, which includes G. S. Singhvi and S. J. Mukhopadhyaya, has been rather progressive, much to the delight of liberals. Both SC justices questioned the home ministry officials and asked who was qualified to say “what is unnatural sex?”

The issue has generated blogs and articles across India and has been hotly debated on social media platforms, including Facebook and Twitter, where most posts have been critical of P.P. Malhotra’s remarks.

Tanuj Khosla, writing for the Times of India, says that times have changed. "It is heartening to see that the judiciary is looking to adapt accordingly. There are many other important issues in India such as corruption, infrastructural problems, inflation and unemployment to deal with rather than wasting time on denying individuals the right of choice.”

Another blogger writing for “New Tweets for Newsers,” Bill Collier, referred to the health minister’s comments as “almost shocking.”

“Either the Indian minister is a backwards barbarian, as some may say, or we are becoming barbarians ourselves, as others may say.”

A historic verdict in 2009 that ended state-sanctioned homophobia is now being challenged in India’s Supreme Court. This is being seen as a test for gay rights in the country. (16.02.2012)

Some might fear persecution being gay in the country that has the largest Muslim population in the world. But in Indonesia a huge gay film festival is held every year. What does is really mean to be gay in Indonesia? (02.03.2011)