Some might fear persecution being gay in the country that has the largest Muslim population in the world. But in Indonesia a huge gay film festival is held every year. What does is really mean to be gay in Indonesia? 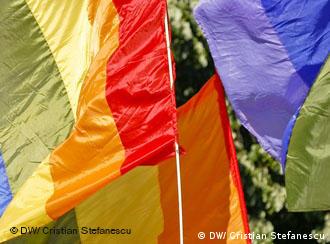 The challenges are increasing for gay people in Indonesia

John Badalu has been organizing the Q! Film Festival for the past 10 years. It is the biggest gay film festival in Asia and the only one of its kind in a country with a majority of Muslim inhabitants. The 38-year-old says it is possible to live a pretty free life as a homosexual in Indonesia's big cities but the challenges are increasing. 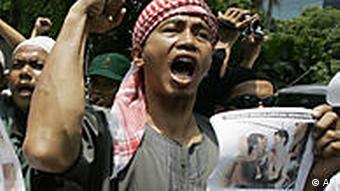 Last year, the Q! Film Festival was attacked by the radical Islamic Defenders Front (FPI), which accused Badalu and his team of showing pornographic films. They threatened to burn down the venues if the festival was not stopped.

Convinced that his organization was on firm ground, Badalu and his team refused and the festival was held in five big cities. A few months before, an international gay conference that was supposed to be held in Surabaya in East Java had been cancelled after coming under attack from the same radical group.

Badalu is not overly concerned. He says it is not just gay people that FPI is targeting, but also other minorities such as members of the Islamic movement Ahmadiyya.

"If anything is against Islam in their interpretation, they will go against it, they will go and bash them," explained Badalu further. However, according to Badalu, there has never been gay bashing in Indonesia.

No special treatment from the government

He also adds that Indonesia cannot be compared to other Muslim countries such as Iran where people have been executed because of their sexual orientation. In Indonesia, there is no law to do with homosexuality. 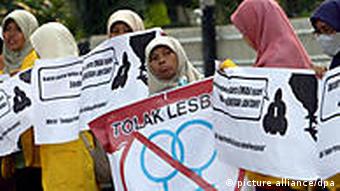 There is no law to do with homosexuality in Indonesia

Many see this as an advantage but Hartoyo from "Our Voice," an NGO that fights for the rights of homosexuals and bisexuals in Indonesia, is of another opinion.

"The government does not give special protection to the Lesbian Gay Bisexual Transgender community," he complained. He added that they needed special treatment so they can finally access their civil rights, in the areas of politics, economics, social and culture.

Hartoyo was himself beaten up in public a few years ago when he was living with his partner in Aceh. When he went to the police station, he was "treated like an animal."

After waiting for more than 18 months, four of his seven tormentors were given probation and a 10-cent fine. Hartoyo says he is still traumatized by the incident, which he says is a clear example of the state not guaranteeing his rights as a citizen.

Big pressure to get married 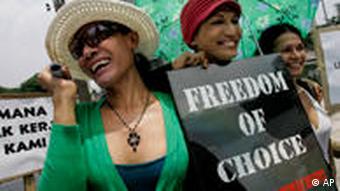 The challenges are often from society. There are certain fields where gays are openly accepted, especially television and advertising but there have been cases of people being fired because of their sexual orientation in other sectors.

Many transsexuals do not have ID cards because they are reluctant to go through the bureaucratic procedures as they are often made fun of by civil servants. This means that many do not have access to free health insurance.

Dede Oetomo, the co-founder of the first homosexual organization in Indonesia, says that in the past 20 years societal pressure to marry generally has become stronger, and especially for gay people. Many families think that their children’s sexual orientation might change if they get married.

"It's actually the family that is the scariest to many gay men and lesbians in Indonesia," Oetomo says. "Telling your mum and dad ' I'm not getting married, I'm not giving you children.'"

Because of this kind of pressure, there are mainly two alternatives - either gays and lesbians decide to get married just to please the family or they run away from them.

Laura Coppens, a film producer from Berlin who is making a film about lesbian women in Indonesia called the "Children of Srikandi," thinks most Indonesian people are generally tolerant towards homosexuals but prefer not to talk about it because of the strong culture of shame or malu in Indonesian. 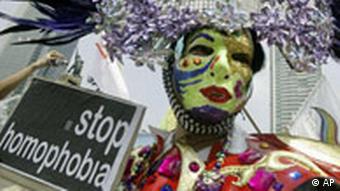 She says that one woman in the film said that she was not accepted by her family anymore because she was a lesbian and the family felt ashamed.

The strong feeling of malu is very important in the Indonesian society, says Coppens who is also writing a thesis at the University of Zürich on lesbian women in Indonesia.

"It is funny though, because if you don't talk about stuff in Indonesia, then it doesn't bother anyone. There are cases of lesbian couples who live happily in their neighborhood and nobody cares about them."

"It becomes a problem only if you talk about it," she says.

Oetomo agrees on this point, mentioning the example of transsexuals who are popular as entertainers, but not if they are your relatives.

This is why many Indonesian transsexuals run away from home, without any educational background or skills, says Hartoyo.

Ironically, he adds, the place that is supposed to be the safest sometimes turns out to be a very dangerous one for transsexuals.

Like in many other countries, life for homosexuals is not easy in Indonesia. Experts also see the need for the Indonesian government to improve conditions by fostering a culture of discussion or providing more sexual education.

But for film festival organizer John Badalu, it is also the duty of each homosexual to fight for his or her own freedom and to say - I have the same right to live as any other citizen.

At least three people were killed when hundreds of Muslims attacked members of the Ahmadiyah minority group on Sunday. The government is again under pressure to revise regulations concerning religious freedom. (07.02.2011)

A million couples in France have entered into a partnership contract or PACS since it was introduced in 1999. Intended for gays and lesbians, it has now become popular among heterosexuals. (14.02.2011)