It is a key reference for all off-beat explorers with a passion for rust and flaking paint, set to a historical backdrop. Now "Abandoned Berlin," one of the city's most popular blogs, has been released in print. 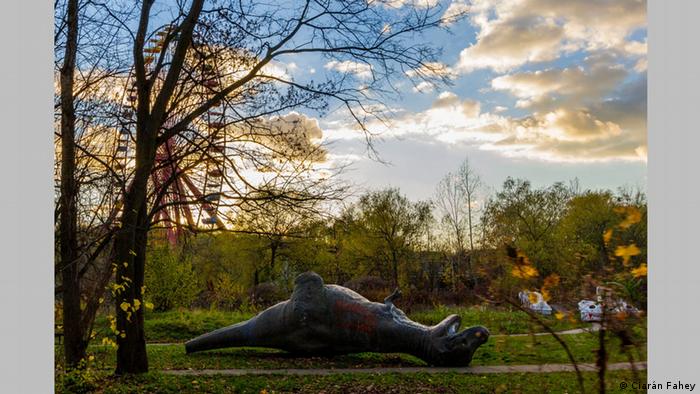 When the colorful rides of an amusement park are left to decay and turn into a seemingly post-apocalyptic landscape, you can't help but wonder what happened there. Like Pripyat, near Chernobyl, Berlin also boasts one of those abandoned amusement parks, albeit without the radioactive fumes. The Spreepark closed in 2001. Since then, a Ferris wheel, giant plastic dinosaurs, twirling teacups and mustached pink cars are abandoned in a huge overgrown lot, awaiting their unknown fate.

The Spreepark was the first abandoned environment Ciarán Fahey would visit in Berlin in 2009. "I couldn't really believe that such a thing existed. I was just so amazed that I had to write about it. I'm a journalist, so I suppose I have this urge to write," he tells DW. The adrenaline-filled expedition would lead to many more.

Under the pseudonym "Spudnik Ó Fathaigh" or "the Irish Berliner," the Berlin-based Irish sports journalist then started compiling a blog on his explorations of abandoned buildings, entitled "Abandoned Berlin." He's covered over 40 locations since, from Honecker's bunker to Saddam Hussein's abandoned embassy. 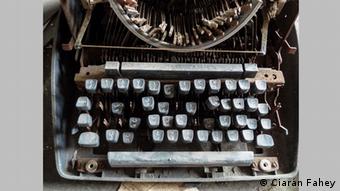 The Iraqi Embassy to East Germany was abandoned in 1991, leaving rusting typewriters

The chronicle of his first trip to the Spreepark already boasts all the elements which make his blog such a compelling read.

A gripping storyteller, the Irish Berliner shares the tension he goes through each time he discovers a place which is (perhaps) empty of people, yet loaded with so much history. The chuckles he hears in the amusement park must be those of the ghosts of evil clowns. In a Cold War bunker, he fears stepping on a forgotten trigger and setting off nuclear missiles. While exploring an abandoned Soviet military camp, he thinks for a second he's stumbled upon the body of a dead soldier.

Beyond writing about the suspenseful thrills of getting into those forbidden locations, he always reveals the stories surrounding the building's past. If the Spreepark offers a riot of a story in itself, involving an enterprising amusement park operator who tried to smuggle 181 kilos of cocaine in a ride called the "Flying Carpet," Berlin's history offers countless twisted episodes as well.

Now tens of thousands of readers are fans of his blog and have shared it on all social networks. The Guardian included it on a list best city blogs from around the world. "I'm surprised how popular it is. It's probably because there's something for everyone," Fahey explains. Along with his stories, the Irish Berliner includes practical advice for people who would like to try it out for themselves. Readers from as far away as China say they want to come to Berlin because of his site.

This popularity didn't come across well amongst the already initiated explorers, many who would have preferred those places be kept secret. "It's really sort of taboo. You have these abandoned places, but people who know about them don't like telling other people about them and they actually get very upset when you spill their secrets," Fahey says.

Some of the once-secret places, where people could walk in and wander alone a few years ago, are now hard to reach without paying for a guided tour. "When they see that all of a sudden a lot of people are going to a place, they realize there's money to be made out of this. They beef up security and charge people for admission," Fahey says. This happened to two of the most popular abandoned destinations, the Spreepark and the former NSA listening station on top of the Teufelsberg.

Even though the Irish Berliner's website certainly contributed to the popularity of these locations and he has to deal with occasional detractors, most readers are happy to use it as a forum where they can share their own experience and update fellow urban explorers on the current situation of each location. For example, on a page about the Teufelsberg there have been over 150 comments serving this purpose, dating back to 2010. The author himself reacts regularly to thank his readers for their updates.

From online to on shelves 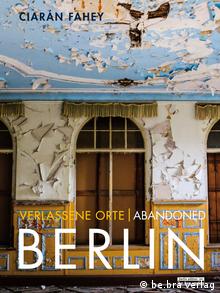 'Abandoned Berlin' is now in print.

With all this success on the web, it's no wonder a book is now publishing the results of Ciarán Fahey's years of exploration, photography and research. The publishers at be.bra verlag admit to being great fans of the blog and took the initiative to get in contact with Fahey for the book project. The bilingual photography book "Verlassene Orte / Abandoned Berlin" will be officially released on March 2, 2015 - however it is already available online.

The importance of documenting the ephemeral condition of these places is one of the main motivations of the publishers. This consideration prevails over the legal concerns which could arise from showing places whose access is officially verboten. "We did think about it," Robert Zagolla, editorial manager for be.bra verlag, explains. "But there are already a whole series of books in the same style. And since these places might disappear soon, we found it interesting to show them." Although he adds: "We expressly avoided giving advice for copycats, explanations on how to cut a fence or stuff like that."

If the website allows regular updates, the book offers a long-lasting tribute to the history of Berlin through snapshots of its abandoned buildings. In his foreword, Fahey poetically reaffirms his passion for the process of chronicling the stories of these constantly changing places. "Documentation, I feel, is the best we can hope for. Grasp what remains of the past through the present. This is an attempt to remember someone else's memories," he concludes.

Reaching out to the past

Asked about the changes in the architectural scenery, Fahey mentions some disappointing cases like the Tacheles, a squat and art house recently closed down by investors in Berlin's centre. On the other hand, he is encouraged by the strength of the city's grassroots movements, such as the one committed to saving Tempelhof. "Overall, I think Berlin is quite strong, in that people are aware of what they have and are prepared to fight for things, especially compared to what I know in Ireland. I think in Dublin people would just go: 'Ah, yeah that's a pity.' They'd give out about it but they wouldn't actually take to the streets or do anything about it, they'd sit in the pub, cry into their pints and that would be it."

To make sure the next generation of Berliners care for their abandoned treasures, Fahey will keep on documenting them. He also already introduced his four-year old son to the pleasure of urban expeditions in modern ruins. The boy fell in love with the so-called Zombie hospital, as the father proudly recalls: "There's brilliant street art there - there's a bear. So he was hugging the wall with the picture of the bear on it. He loved it."

The stereotypical urban planner has a reputation for pushing pencils rather than downing shots. But urban scientist Jakob F. Schmid explains why they should care what goes on in their cities' bars and clubs after hours. (24.02.2015)

Münster has been a favorite among cyclists for many years. What are the other most bicycle-friendly cities in the country? (20.02.2015)

Record number of visitors in Berlin

Tourism keeps booming in Berlin. With 28.7 million overnight stays and 11.9 million visitors in 2014, the numbers have significantly increased compared to the previous year. (18.02.2015)