Blatter: 'Of course a mistake' to award Qatar 2022 World Cup

FIFA President Sepp Blatter has said that it was "of course a mistake" to pick Qatar for the World Cup, citing the hot climate in particular. Yet sunshine is not the only shadow hanging over Qatar's nomination. 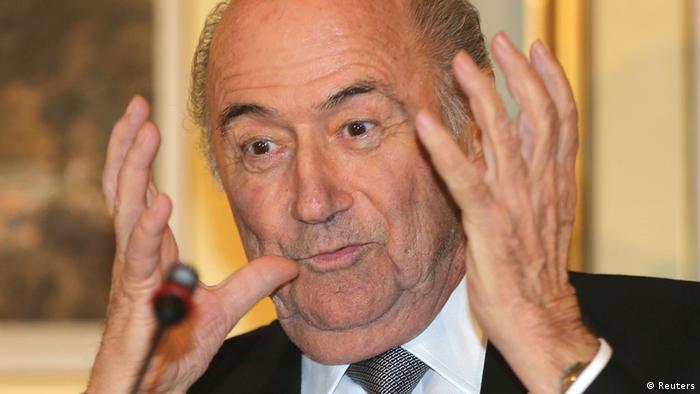 Sepp Blatter told Swiss TV channel RTS on Friday morning that, in hindsight, he regretted the nomination of Qatar for FIFA's 2022 World Cup.

"Of course it was a mistake!" Blatter told RTS. "But you know, we make a lot of mistakes in life."

The 78-year-old - considering a bid for re-election as FIFA president having previously promised that his current, fourth term would be his last - focused in particular on the weather conditions in Qatar and his FIFA colleagues who cast the vote.

"It was clearly shown in a study that the temperatures would be too hot in summer," Blatter said. "This situation did not stop the FIFA Executive Committee, however, from awarding the World Cup to the Emirate with a large majority."

Blatter first suggested that the tournament would have to be rescheduled owing to Qatar's hot temperatures late last year. He told RTS on Friday that he favored pushing the competition backwards, into the latter months of 2022 as opposed to the usual window during the northern hemisphere's summer. Blatter's deputy Jerome Valcke has made similar suggestions.

Former England striker Gary Lineker, a longstanding football pundit on the BBC, was among the first prominent names to react with outrage to Blatter's comments.

"Imagine the shock at FIFA HQ when, two years after the vote, someone spotted that Qatar's a tad warm in the summer," Lineker said on Twitter, being a little more kind to FIFA than he perhaps intended - the vote actually took place almost three-and-a-half years ago.

Qatar had campaigned for the World Cup insisting that its June and July weather - with temperatures frequently peaking at around 50 degrees Celsius (122 degrees Fahrenheit) - would pose no problems for the competition.

In his final pitch, the CEO of Qatar's bid, Hassan Al-Thawadi, said solar-powered, carbon-neutral air conditioning systems would keep "all our stadiums, training sites and fan zones … at 27 degrees Celsius."

A country without either a successful national team, past star players, or an established domestic soccer division, Qatar instead looked for foreign talent to support its World Cup bid.

Big-name stars like Zinedine Zidane, Ronald de Boer, and current Bayern Munich coach Pep Guardiola were among the official advocates of the Qatari bid. The country ultimately beat out bids from the United States, Australia, Japan and South Korea - winning a December 2, 2010 vote in which Russia was also awarded the 2018 competition.

Blatter on Friday disputed allegations, however, that Qatar had "bought" the rights to host the World Cup. "No, I have never said it was bought, but that it was due to political considerations," he said.

Qatar's human rights record has also come into sharp focus since the nomination, not least the treatment of migrant workers brought in for World Cup-related construction projects. A damning Amnesty International report last November condemned the "ruthless exploitation" of foreign staff in the small Gulf kingdom. FIFA subsequently said it would seek a "clear picture" on the situation.