FIFA President Sepp Blatter has hinted that he wants to stand for a fifth term as head of soccer's governing body, saying his work is "not yet complete." Several years ago, he had said he intended to step down in 2015. 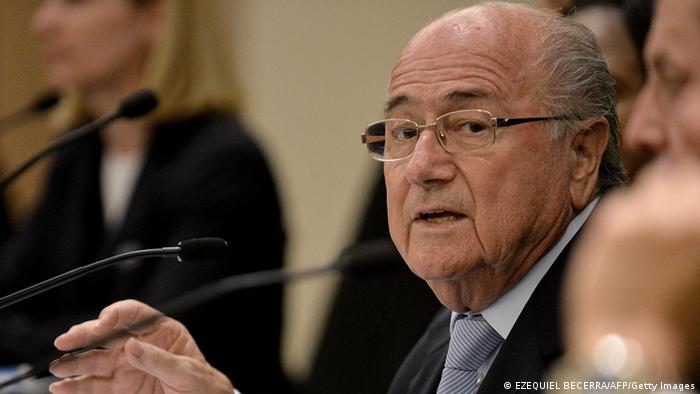 Dropping the clearest hint yet that he would officially enter his candidacy for another term at FIFA's helm, Blatter said he still had work to do.

"I want to do this, because things aren't over yet," the 78-year-old told the Swiss newspaper Blick in an online interview. "My term is coming to an end but my mission is not yet complete."

In 2011, Blatter said his current fourth would be his last, with an election due to be held in 2015.

However, since then he has indicated that he would be willing to reconsider. At the Sochi Olympics in February, he told Swiss broadcaster RTS that he "wouldn't say no" to a new mandate, provided he was in good health.

Frenchmen in the running

Blatter was elected unopposed in 2011, with his rival for the four-year term, Mohamed Bin Hammam, withdrawing his candidacy after being accused of trying to bribe potential voters in the election.

The only formal candidate for the FIFA presidency so far this time around is Frenchman Jerome Champagne, a former secretary general of FIFA and a one-time diplomat. Champagne has said he would pull out if Blatter, as his former boss, were to enter the race.

However, Blatter could face opposition from Michel Platini, currently head of European football's governing body, UEFA. The 58-year-old former France star was recently reported to have said he was the only person who would be able to beat Blatter. However, Platini has not yet said whether he will run.

Blatter would be expected to announce his candidacy formally at the FIFA Congress, due to take place in the Brazilian city of Sao Paulo ahead of the World Cup.

The FIFA president also told Blick that although he had concerns about construction delays in Brazil, he was confident the matter would be resolved.

"This is now my 10th World Cup and there are always problems before a World Cup before everything is ready," he said.

A continuation in the role would leave Blatter to deal with ongoing controversy around the 2022 World Cup in Qatar.

The Gulf state has been criticized for its record on the conditions of employees working on tournament infrastructure, while the possible staging of the event in winter has drawn criticism from national leagues.