FIFA has said it will take a closer look at conditions on construction sites in Qatar ahead of the 2022 World Cup. The Gulf state has been accused of abusing the rights of migrant workers involved in building projects. 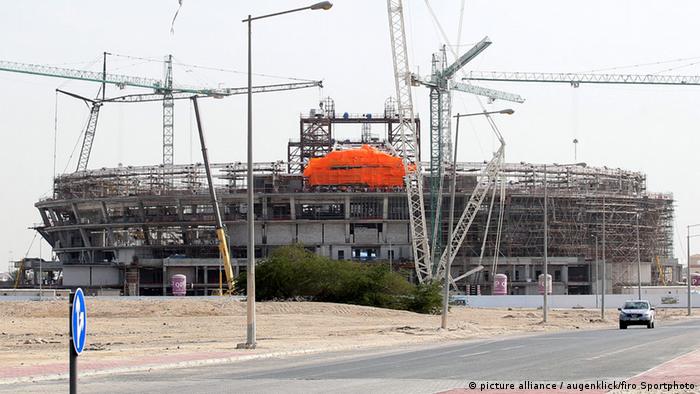 The world football body said on Friday that, in the coming weeks, it would send inspectors to find out more about the situation of workers in Qatar.

"We need to get a clear picture in Qatar," said Theo Zwanziger, former German Football Association (DFB) president, after a meeting of the FIFA executive committee. "We want to find out what's really happening in Qatar - and what we can do."

The Qatar World Cup organizers have faced a barrage of criticism over the issue of the rights of migrant workers employed on infrastructure projects. Britain's Guardian newspaper reported in September last year that hundreds of guest construction workers had died and that laborers were not being given enough food and water.

Zwanziger, who has urged politicians to become involved in putting pressure on Qatar, said FIFA would seek talks with officials and companies involved in the construction by the end of April or beginning of May. But he added that it would make "no sense" to make threats.

Qatar's "kafala" system, which gives employers a considerable degree of authority over employees - allowing them, for example, to withhold passports - has been criticized by rights groups as a form of modern-day slavery.

FIFA President Sepp Blatter said the organization was in contact with NGOs and politicians regarding the rights situation in Qatar, but that FIFA was not directly responsible.

"The responsibility lies with the Qataris and with the firms that employ the workers," Germany's SID news agency reported him as saying. "We do carry a share of the responsibility, but we cannot interfere. Instead we must seek a dialogue with those who are truly responsible."

In a statement on Wednesday, rights group Amnesty International had urged FIFA to take action. "When FIFA awarded the 2022 World Cup to Qatar, it assumed a responsibility for the human rights impact of that decision," said Amnesty's researcher on migrant workers in the Gulf, James Lynch. "It is involved in this issue, whether it likes it or not."