The actor who played the lead role in the 2018 Marvel film Black Panther has died following a private battle with cancer. A sequel to the blockbuster film had been announced for 2022. 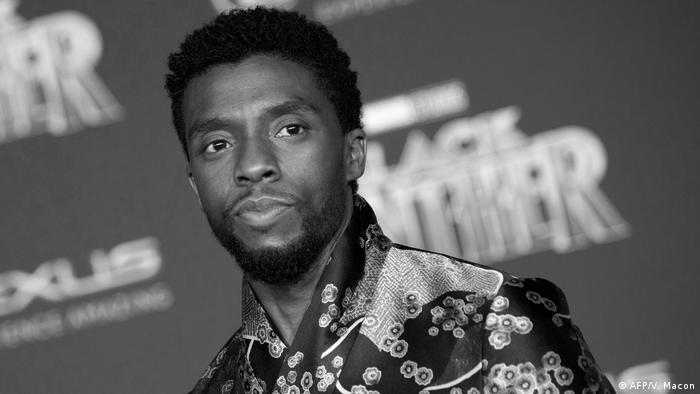 American actor Chadwick Boseman, best known as the star of the groundbreaking superhero movie Black Panther, has died of cancer at the age of 43, his representative said Friday.

Boseman died at his home in Los Angeles surrounded by his family, publicist Nicki Fioravante told The Associated Press.

An announcement from his family posted to his Facebook and Twitter accounts said the actor had died after a four-year battle with colon cancer.

"A true fighter, Chadwick persevered through it all, and brought you many of the films you have come to love so much," the statement said.

"From Marshall to Da 5 Bloods, August Wilson's Ma Rainey's Black Bottom and several more — all were filmed during and between countless surgeries and chemotherapy," it said.

Boseman is survived by his wife and a parent.

Boseman first caught Hollywood's attention portraying historical figures, including Jackie Robinson, the first African-American to play Major League Baseball, in the film "42" and musician James Brown in "Get on Up."

But he is most noted for his role as King T'Challa in the 2016 Marvel film "Black Panther." The film, based on a Marvel comics character, was the first superhero blockbuster to feature a predominantly African-American cast.

His family said the role "was the honor of his life."

The film went on to win three Academy Awards in 2018, the first-ever for Marvel Studios. A sequel had been announced for 2022.

"So many people, particularly kids, were looking forward to seeing him reprise the role in the sequel," entertainment journalist KJ Matthews told DW, adding that the reaction in Hollywood had been one of "shock" and "sadness."

Boseman had never spoken publicly about his battle with cancer. According to the statement on his social media accounts, he was diagnosed with stage 3 colon cancer in 2016, with the disease ultimately advancing to stage 4.

Expressions of shock and condolences poured in following the news of the actor's death.

"Heartbroken. My friend and fellow Bison Chadwick Boseman was brilliant, kind, learned, and humble. He left too early but his life made a difference," wrote recently nominated US democratic vice-presidential candidate Kamala Harris.

Harris and Boseman are both graduates of Howard University in Washington, D.C.

The democratic presidential nominee himself also voiced his condolences.

"From the Black Panther to Jackie Robinson, he inspired generations and showed them they can be anything they want — even superheroes," wrote US democratic presidential candidate Joe Biden on Twitter.

US Major League Baseball also honored the actor's memory and his portrayal of player Jackie Robinson.

"[Boseman's] transcendent performance in '42' will stand the test of time and serve as a powerful vehicle to tell Jackie's story to audiences for generations to come,'' the sports association wrote on Twitter.