Bishop Bernard Fellay: Between traditionalism and religious slur | Europe| News and current affairs from around the continent | DW | 01.03.2016

Having called Jews "enemies of the church," Bishop Bernard Fellay is used to causing a stir in the Vatican and beyond. On this week's Conflict Zone, he denies being anti-Semitic and explains why he opposes Pope Francis.

The Society of St. Pius X is a fraternity of priests which was founded by the French Roman Catholic Archbishop Marcel Lefebvre in response to the church's doctrinal changes introduced by the Second Vatican Council in the mid 1960s. All along, Lefebvre's aim was to resist the Vatican's efforts to modernize the Church. Its traditionalist members have taken aim at Jews, homosexuals and Muslims in the past.

Bishop Bernard Fellay, head of the fraternity, enraged Jewish groups when he referred to Jews as enemies in December 2012: "Who, during that time, was the most opposed that the Church would recognize the Society? The enemies of the Church. The Jews, the Masons, the Modernists." He has since tried to clarify his position but never apologized.

In an exclusive interview with DW's Conflict Zone, Fellay now said this statement made "a lot of controversy for nothing." He added: "No, my intention was just to present that the Jews would (...) look at the church as an enemy." When Tim Sebastian asked whether this statement was a "religious slur", Fellay said it was "never intended in the context where it's taken from. I didn't speak about the [Jews]." 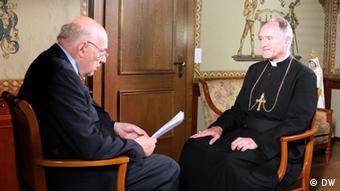 Bishop Bernard Fellay is this week's guest on Conflict Zone with Tim Sebastian.

But these comments are part of a more systemic problem of anti-Semitism within the fraternity.

Denying the Holocaust and other trifles

The group's biggest scandal arguably concerned Fellay's fellow bishop, Richard Williamson, who publicly denied the veracity of the Holocaust. Williamson was later expelled from the society. "If he's silent, if he stays out of sight, that would really be better for everyone," Fellay said at the time, adding that Williamson would be excluded from the community if he was to repeat the claim. "He has hurt us and damaged our reputation. We are definitely distancing ourselves from him," Fellay told German weekly "Der Spiegel" in 2009.

But Williamson did not remain silent. He called for Fellay's removal as Superior General, refused to stop publishing his weekly email newsletter and conducted a visitation in Brazil without authorization. Finally, Williamson was expelled from the Society.

In 1990, Marcel Lefebvre was convicted of defaming the Muslim community of France. He had to pay a 5,000 Franc fine. Confronted with this, Fellay told Tim Sebastian these were marginal episodes: "They are really side questions. That’s not our thing. That's not what we do." 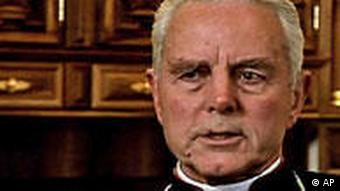 Richard Williamson publicly denied the veracity of the Holocaust and was later expelled from the fraternity.

Fellay is also a vocal critic of Pope Francis. Claiming that Francis’s efforts to include divorcees and homosexuals in the church should be enough "to be scared to death", he explained: "The situation of the Church is a real disaster, and the present pope is making it 10,000 times worse." When confronted with this controversial statement by Tim Sebastian, Fellay refused to admit it was an insult: "It might look as a [form of] disrespect. It was just a statement. (...) It is not an insult. It is [certainly] an expression of a disagreement, yes."

And perhaps even the very fact that Felly calls himself a bishop has been a source of conflict. According to canon law, nobody can be made a bishop of the Roman Catholic Church without the sanction of the pope. When Archbishop Marcel Lefebvre ordained Bernard Fellay and three other traditionalist priests in defiance of Pope John Paul II’s prohibition in 1988, the four men were excommunicated.

Lefebvre maintained that the ordinations were necessary to secure the survival of the SSPX, or as he put it: "By consecrating these bishops, I am convinced that I am keeping alive tradition, that is to say, the Catholic Church."

In an attempt to re-open dialogue with traditionalists factions of the church, Pope Benedict XVI remitted the excommunications in 2009. However, this did not mean recognition of the ordinations. The four men were still not allowed to exercise episcopal function in the Catholic Church.

Bishop Fellay and the SSPX remain vehemently opposed to the principles and implementation of the Second Vatican Council. "We will not make any compromise on the Council. I have no intention of making a compromise. The truth does not tolerate compromise. We do not want a compromise, we want clarity regarding the Council," Fellay said in an interview in 2009. Despite years of discussions with Rome, Fellay hasn’t softened his attitude.


Born in Switzerland, Fellay was drawn to the SSPX from the beginning. He entered the Society’s International Seminary in Écône, Switzerland, when he was 19, to study for the priesthood. After his ordination by Lefebvre, he was appointed Bursar General of the Society. Fluent in five languages, Fellay was elected Superior General in 1994 and has been re-elected for his current term, which expires in 2018.

Plenty of material to hold against Bernard Fellay. What are his justifications? Is SSPX a relic of an intolerant and oppressive church that has long been overcome by Pope Francis' modernizations? Judge for yourself on Conflict Zone with Tim Sebastian.

Why Bishop Fellay and SSPX are so controversial

British-born bishop Richard Williamson has been excluded from the Catholic Pius Society. The action against the man who made headlines three years ago for denying the Holocaust was taken for "disobedience." (24.10.2012)

Pope Francis has offered a public apology for a number of recent scandals to rock Rome and the Vatican. The pontiff is presiding over a three-week council to discuss church teachings and family. (14.10.2015)