The US president-elect said that many of America's security agencies had been "hollowed out" under Trump. He called the lack of information "irresponsibility" and said his team was facing political obstruction. 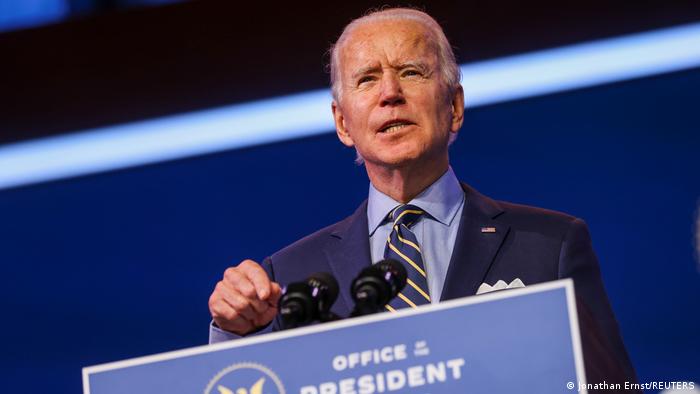 US President-elect Joe Biden delivers a speech at his transition headquarters in Wilmington, Delaware

US President-elect Joe Biden warned on Monday that many of America's security agencies had been "hollowed out" under President Donald Trump, and that the lack of information being provided to his transition team was an "irresponsibility."

"We've encountered roadblocks from the political leadership at the Department of Defense and the Office of Management and Budget," Biden said after a meeting with his foreign policy team.

"Right now we just aren't getting all of the information that we need from the outgoing administration in key national security areas. It's nothing short, in my view, of irresponsibility," he said.

While speaking in Wilmington, Delaware, Biden said his team has faced "obstruction" from the political leadership at the Defense Department and the Office of Management and Budget as they've sought to gather necessary information to continue the transition of power.

Biden warned that his team needs "full visibility" into the budget process at the Defense Department "in order to avoid any window of confusion or catch-up that our adversaries may try to exploit."

He added that they need a "clear picture of our force posture around the world and of our operations to deter our enemies."

Biden's comments came after he was briefed by members of his national security and defense teams and advisers. He said his team found that agencies "critical to our security have incurred enormous damage" during Trump's time in office.

Trump, a Republican, has refused to concede defeat in the presidential election, which he lost by more than 7 million votes. His administration only authorized cooperation with Biden on November 23, after initating a number of failed lawsuits to recount votes. Biden will take office as US president on January 20.

The White House has said the president was experiencing "very mild symptoms" and was taking a course of antiviral drug Paxlovid. The 79-year-old has been vaccinated against the coronavirus and received two boosters.

US: Biden signs off on semiconductor bill in challenge to China 09.08.2022

The future of microchip production will be "made in America," said US President Joe Biden while presenting the $280 billion Chips and Science Act.