Better than Ronaldo — Do we really need robots that play football? | Science | In-depth reporting on science and technology | DW | 18.12.2018

Better than Ronaldo — Do we really need robots that play football?

They may have failed at the World Cup this year, but Germans are still football champions — at least with robots. But why teach robots to play soccer? DW went to the University of Bonn to find out. 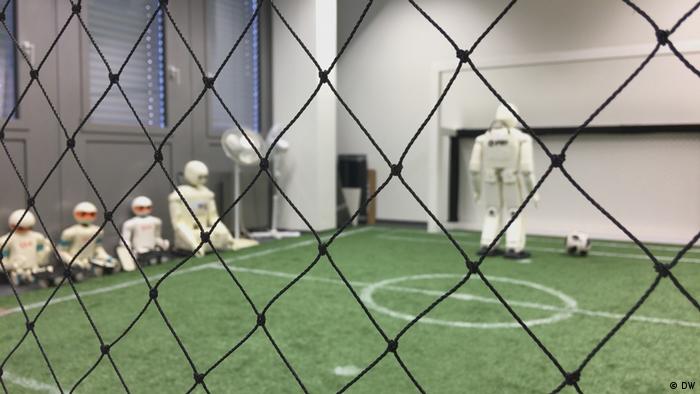 At 135 centimeters tall (nearly 4.5 feet), with a white, wavy body and big black eyes, robot NimbRo OP2X is a source of pride for researchers at the University of Bonn. And rightly so.

This year, he helped his team take first place in the AdultSize League in the RoboCup — the world football competition for robots.

On the final fight, NimbRo pulled off a win against another German robot, Sweaty, the creation of scientists from Offenburg University.

NimbRo was born in the department of autonomous intelligent systems, housed in a brand new campus at the University of Bonn. Half of the facility is taken up by a 9 by 14 meter soccer field with artificial grass and goals. The other half is dedicated to computers, cables and changeable batteries.

Here, a team of researchers from all around the world is working on something that might sound like a joke at first.

They're teaching robots how to play football.

Not a simple game

Football might just be a game for us, but for a robot — and the programmers who operate it — it's hard work.

"Walking is natural to humans, but robots need very complex algorithms to walk around and to just keep their balance," says Grzegorz Ficht, one of the researchers working on the project.

He turns on a button on NimbRo's body, and the red light on the head of the robot begins to glow. A hard drive starts to whirr loudly. Inside, there's a standard PC. Ficht, on his knees, lifts the robot. NimbRo stands without any help.

Every movement the robot performs is preprogrammed. But he's also able to make decisions on his own.

"He analyses the images, and segments the interesting parts," Ficht says. "He can recognize parts of the field, the center circle and ball itself, and then orient himself on the field based on that."

And, most importantly, he knows where to kick. 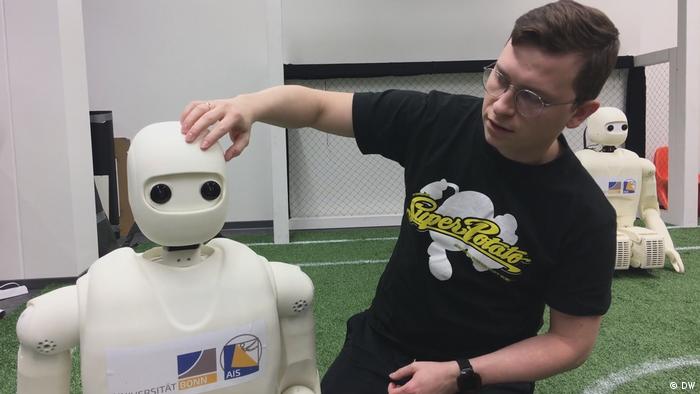 What NimbRo cannot do is to learn by himself, though. Not yet, at least.

"There are already robots that can understand semantics," Ficht says. "But for robots to be able to learn by themselves, you'd need much more developed algorithms that are only starting to be developed today." 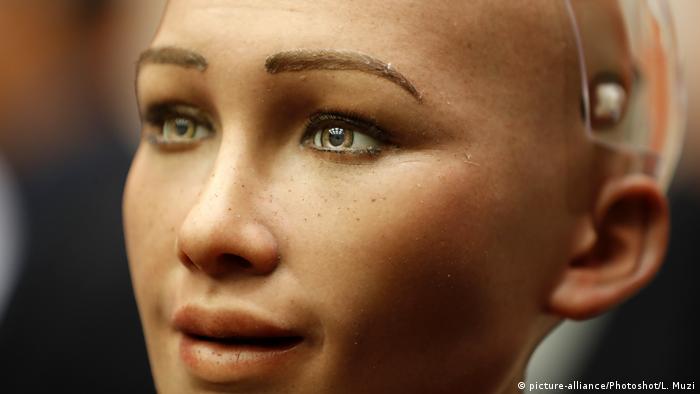 More than a game

The yearly RoboCup competition is a good benchmark for humanoid robots, says Ficht. The ultimate goal of the researchers involved is to create a team of robots that can beat the real World Cup champions by 2050.

Making robots as good as humans — or even better — will do a lot more than merely entertain us. This technology can ultimately improve our lives.

"The idea is that we'll be able to deploy those robots to go in places where we don't want to send humans, and they could be semi-autonomous," Ficht says.

Natural disasters, nuclear catastrophes, space exploration — these are only a few areas where humanoid robots can be used in the future. Using robots as social workers and companions is another popular idea. The Japanese government, for example, is funding the development of robots that can take care of elderly people.

But … they'll steal my job!

Many, however, fear that the better robots can imitate humans, the more likely it'll be that they'll steal their jobs. Ficht finds this idea absurd.

He's optimistic that robots will do jobs that people don't want to do and that they'll create new jobs for people like him — for the operators, programmers and manufacturers of robots.

Standing next to the mini football field at the University of Bonn, we observe NimbRo in action. The robot is moving rather slowly and clumsily. Ficht walks after him to prevent the robot from falling. And this is the best soccer humanoid robot in the world.

It's hard to believe that, in some 30 years' time, he'd be able to outplay Cristiano Ronaldo. Let alone steal my job.

Oh, you brave new world. At tech fairs like CeBIT, the air is buzzing with enthusiasm for artificial intelligence. But how do people here feel about robots taking our jobs? Malte Rohwer-Kahlmann went to find out. (22.03.2017)

Isah Barde's robot is made of recycled materials. The 17-year-old Nigerian believes it could help with jobs that are dangerous for humans.