Oh, you brave new world. At tech fairs like CeBIT, the air is buzzing with enthusiasm for artificial intelligence. But how do people here feel about robots taking our jobs? Malte Rohwer-Kahlmann went to find out. 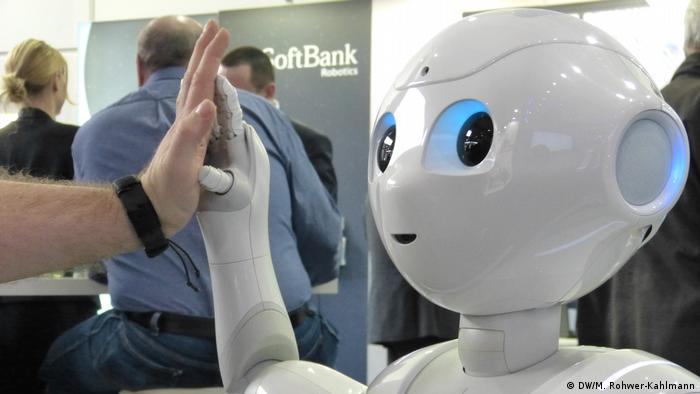 "What do you think, am I a robot or not?” he asked, and looked at me. The shiny black hair. The smooth, mildly tanned, almost too spotless skin. The gaze behind his lightly shaded glasses. I hadn't noticed these things that much until now. I had been talking to Hiroshi Ishiguro for exactly 12 minutes and 58 seconds at that point, without even a single doubt that he was a living person. But all of a sudden I wasn't so sure anymore. Had I been fooled by a machine?

Artificial intelligence already surrounds us. We talk to our phones, blindly follow GPS devices, and let Facebook's algorithm pick our news for us. But at tech fairs, like the CeBIT in Hanover, it's palpable that bigger, more profound changes are rolling in. What's shown here will transform our daily lives, our economies, our societies. Companies' PR people at every corner praise their latest inventions and promise to "increase productivity” and "reduce costs”. The future is now.

The global market for cognitive computing will grow from 980 million euros ($1.06 billion) to 13 billion euros by 2020, predicted German IT association Bitkom. But there is also a flipside. Technology will kill people's jobs. This has already happened in manufacturing - but machines have become more skilled. Artificial intelligence can now take over many administrative tasks and service roles, and perform better than humans. Technological progress could cost more than five million workers in industrialized countries including Germany their jobs by 2020, the World Economic Forum estimates. Do these prospects mar the tech enthusiasm at CeBIT? How do people here feel about the changes to come? I wanted to find out. 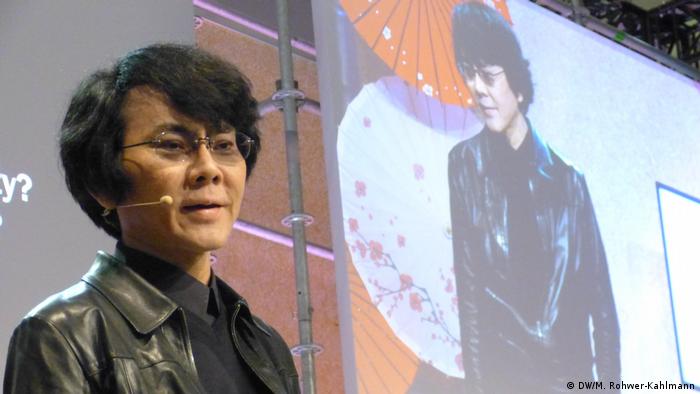 Hiroshi Ishiguro laughed when he saw how much his question had baffled me. Only then I was sure it was really him who sat opposite me, and not his robot doppelganger that had made him famous. Ishiguro is a firm believer in robotics and its potential to improve our lives. And he also thinks they should look as human as possible, because that makes it more natural for us to interact with them.

The 53-year-old researches at the university of Osaka in Japan, where he builds his androids, strikingly human-like robots. In Japan, robots are already a common sight. At his Cebit talk, Ishiguro showed clips of android actors that, he said, touched the audience's "hearts and minds” or android shopkeepers that outsold their human counterparts. And these were no fantasies of his. They already exist. He painted a robot society, in which humans and robots live side by side. He even said at one point there might be no difference between the two anymore.

Later, when we talked, he seemed eager to convince me and the other journalists that the future was going to be great. He sometimes banged his hand on the table and slightly raised his voice. For him, robots were the perfect way to counteract the ageing of Japanese society. But would all the people who had been replaced at their jobs easily find new ones? "Of course,” said Ishiguro. "We can always increase productivity because we have technology, we have robots. And humans can have more freedom.”

"I'll have to think about some stuff now,” I said to Ishiguro after our interview. And I meant it. He had shown a video at his talk, of two androids and one human having a conversation. It eerily looked like it was taken from Hollywood sci-fi films from around 10 years ago. But this was real. It gave me the chills. Ishiguro's vision of a brave new world freaked me out, but at the same time fascinated me.

I wanted to experience what the future may feel like. So I went to meet Pepper, a humanoid robot that takes on simple service tasks such as telling people the price of a certain item. Pepper is small, has got large, round eyes, and a lasting smile on his face. He - or she or it if you like - is designed to be cute.

Talking to Pepper felt a bit stiff at first. The voice recognition would often fail to understand what I said, and the particular software on this Pepper was quite limited in its function.

But eventually, Pepper set off the nearby coffee machine after I'd asked him to. And then he told me a dirty joke and broke out in laughter, which in turn made me chuckle. There it was. A robot had charmed me. I felt a weird sense of connection with, well, a machine. The hand gestures, the way the face looks at you from below - it's easy to forget for a moment that Pepper is just plastic, computer chips and software.

All cuteness aside, though, he is also a job killer. He is already widely used in Japan, among other countries, and is making his way to Europe. A cruise line already uses Peppers on their ships. And the Deutsche Bahn is to put them up at train stations to let passengers know about departure times and connections. That will make people's jobs obsolete.

Autonomous driving can have the same effect. At CeBIT, two busses from Switzerland were constantly taking visitors up and down a big exhibition hall - without a driver. They are already on the roads in the Swiss town of Sitten, where a test phase is underway.

When I went on it, I got talking to a group of young IT students, who had never been in a self-driving vehicle before, just like me. After the short ride, they were excited. "It does feel quite real, as if someone was driving the bus,” one told me. And what about the bus drivers' jobs? "There's always the argument that robots take away the jobs. I think they will just shift somewhere else,” one said. But will they? 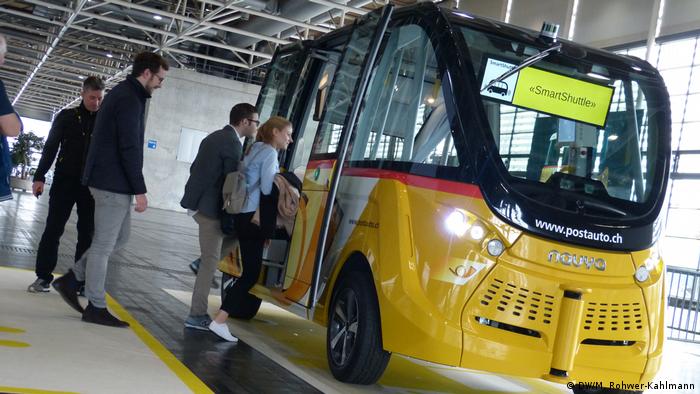 All aboard, apart from the driver: The Swiss Post's shuttles drive completely autonomously

Wolfgang Maaß from the German Research Center for Artificial Intelligence, who I went to speak to after, wasn't so sure. Technological change would create new jobs, he said, but most likely not enough to replace all the ones it killed. "Especially routine jobs, administrative roles which people saw as their life's work, will be completely automated in the future,” he said.

That sentence struck me. Jobs are not only jobs. They also give meaning and purpose. This did seem to worry Maaß as well. "There will be no easy answers,” he told me. But one way of preventing frustration and unemployment was a more holistic, interdisciplinary approach to schooling - and taking all measures to retrain workers in redundant jobs for new roles. But there was no way back, he said. "Humanity couldn't stop the fire. We couldn't stop the steam engine. And just the same we won't stop computers and digitalization.”

Rage against the machine?

My CeBIT day ended with mixed emotions. Of course, the stuff I had seen fascinated me. It is amazing what technology can do and how it will make our lives easier. But I was also worried about what it would do to society. Millions of people replaced by machines, disappointed and stripped of purpose. And in the back of my mind, this dark and a bit clichéd vision of robots becoming more powerful than humans loomed, clearly because of my meeting with Ishiguro.

I remembered I had asked him whether I should be scared of robots taking over, so I went back to the recording of our interview to check what his exact answer was. "Up to you,” he said. "Up to you.”

The European Parliament has voted in favor of a resolution calling on the EU executive to agree on rules for the fast-evolving field of robotics. The rules are to address a wide range of ethical and liability issues. (16.02.2017)

Artificial intelligence is gaining ground. But how will that affect us in the future? “Industry 4.0” is revolutionizing the working world as we know it. Are robots making us redundant? (08.11.2016)

Intelligent machines are outsmarting us, but are we being replaced in the workplace? (15.11.2016)