A single photo of US Senator Bernie Sanders has inspired countless memes worldwide. The Democrat said he would use the viral image to help feed the hungry. 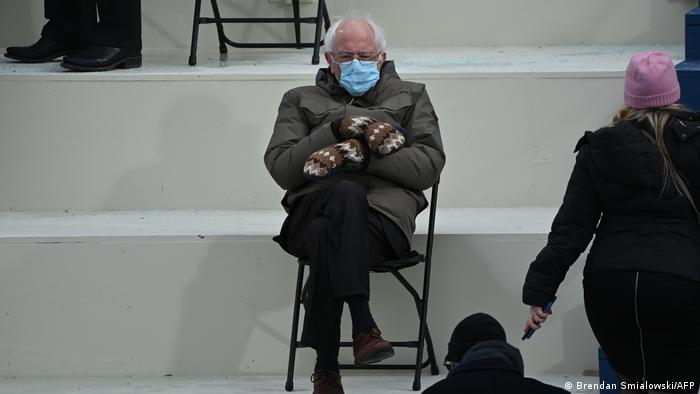 Fans of Bernie Sanders are now able to buy sweatshirts imprinted with the viral photo of the US senator from Joe Biden inauguration, with all proceeds going to charity.

When asked by CNN for comment about his newly-found fame on meme sites, Sanders said he was overjoyed that it could be turned to good use via online sales.

"What we are doing here in Vermont is we're going to be selling around the country sweatshirts and T-shirts, and all of the money that's going to be raised – which I expect will be a couple of million dollars – will be going to programs like 'Meals on Wheels,' that feed low-income senior citizens," Sanders said on Sunday.

From 'Baby Yoda' to the Sistine Chapel

The now-famous photo of the 79-year-old Bernie Sanders was taken by AFP photographer Brendan Smialowski at US President Joe Biden's inauguration.

It shows the independent Vermont senator huddled in a chair against the cold, socially distancing as he keeps his arms folded above a distinctly unglamorous average-guy winter coat.

Sanders' overall look – and his curmudgeonly glare — has prompted a river of creative memes as people worldwide have superimposed Sanders on famous works of art and into family photos.

In recent days Sanders has been shown in Zoom meetings:

Or sitting on the Iron Throne from "Games of Thrones", or alongside Franklin D. Roosevelt, Winston Churchill and Joseph Stalin in Yalta in 1945.

others have depicted him in his mittens touching Michelangelo's Hand of God in the Sistine Chapel.

When asked about his outfit on Wednesday, the typically non-plussed Sanders grinned slightly while telling interviewers on CBS: "You know in Vermont, we dress warm, we know something about the cold, and we're not so concerned about good fashion."

Not your typical mittens

The woman who created the thick brown and beige mittens, Jennifer Ellis, hadn't even met Sanders before the inauguration.

A 42-year-old elementary school teacher from the town of Essex Junction, Vt, Ellis made the gloves from repurposed wool sweaters, using fleece made from recycled plastic bottles for the inside lining.

She first sent a pair to Sanders after he lost to Hillary Clinton in the 2016 Democratic presidential primary.

Last year, when Sanders was again running for president, Ellis learned that he liked wearing her creations. She was so touched after finding out that he'd lent them to someone in need that she sent him another 10 pairs.

Ellis is thrilled the mittens and meme-making are bringing people joy.

"I mean, people are so funny. And that's what we need right now: it's a very tough time for a lot of people. They need something to laugh about that's totally harmless and not political," Ellis said.