In Berlin, there is a bicycle store on every second corner. DW's Stuart Braun gets on his bike to explore these vital cogs in the wheels of city life. 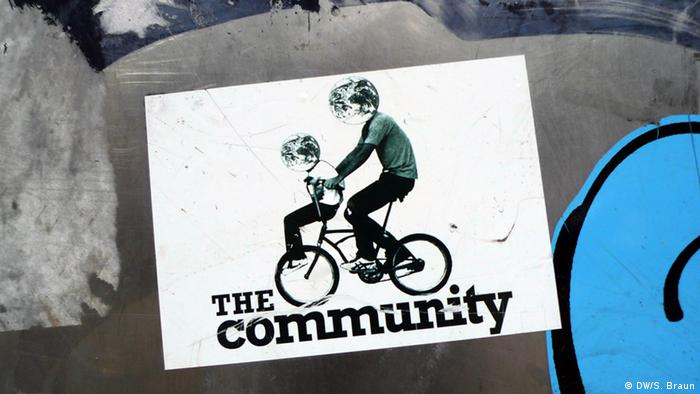 I am lost and inevitably stranded in Berlin without my bicycle.

Tending to ride a cheap, dilapidated relic, I often find myself in bike workshops that miraculously appear around the corner from my latest breakdown.

Once when my pedals had nearly fallen off, I wheeled up to a building covered in street art, a sort of squat where a guy was fixing a bike in an oily workshop strewn with old parts. Seeing my predicament, the young man restored my machine on the spot in 20 minutes, charging only five euros. I wanted to give him more, but he probably would have been offended.

There is something quasi-religious about Berlin's bicycle culture. Many of the city's ubiquitous Fahrradwerkstätte, or bike workshops, have not been set up for profit it seems, but to keep the city moving in the cheapest, cleanest, most relaxed, free, and fun way possible.

As the underemployed summer hordes stream Berlin's leafy wide boulevards on two wheels bought for a song, they can partly thank a cycle counterculture that has long professed the universal right to ride.

The guy that fixed my bike for a few euros, and has revived my worn chariot several times since, works in a former squat established in 1982 that now houses people on low incomes. Typically covered in anti-Nazi slogans - punk bands also blast in the basement - the house is one of scores of once-squatted tenements whose leftist/anarchist residents embraced the bicycle as an antidote to capitalism, car culture and plans to build freeways through their neighborhood.

Radlust (literally, bike delight), a shop in Lausitzer Platz in Kreuzberg, began life in 1981 in the nearby courtyard of a squatted house whose occupiers also successfully protested to stop the massive redevelopment of the area in the 1970s and 1980s. Apart from rebuilding bicycles (and heavy-lifting cargo bikes) from scrap, selling them for cheap - and sometimes giving them away - the workshop founders, including current owner Johann-Christoph Wartenberg, also looked to Amsterdam for inspiration to help make Berlin a utopian bicycle city.

Then called Radlos (a play on the words for "bike-less" and bike fortune), the bike workshop started importing used Holland bikes, arguably the most solid and reliable in the world, and soon put over 12,000 on the road in Berlin. The current Radlust store and workshop is an heir to this movement, a shrine to the Dutch two-wheeler and its adaptation within Berlin's growing bike culture.

Dozens of bike stores have filled every corner of this neighborhood in the decades since. Up the road from Radlust, I wander into Green Go Garage, established five years ago by a Brazilian and former East Berliner, who tells me she escaped into the West with her family the year before the Wall fell. The emphasis here is on reuse and recycling: When they fix a flat they patch the tube instead of replacing it. They don't make a lot of money out of this (business is better when you sell new stuff), so, like many other Berlin bike shops today, Green Go Garage rents bikes to tourists to survive.

Further towards the Oberbaum bridge is Keirin ("racing wheels" in Japanese), a workshop turned bike showroom and cafe created in 2004 by some bike couriers who wanted to hang out and tinker with their classic steel-framed racing bikes - including the fixed-gear variety the store helped pioneer before they became a hipster fad.

Proprietor Mortimer Steinke, a Berliner who co-owns Keirin together with an Englishman, and who was a bike courier in New York for five years, says people can borrow tools and fix bikes themselves at the shop or just hang out in the cafe and watch the Tour de France.

Like the squatters before him, Mortimer is an idealist. For the price of a fancy new car, he suggests that people can buy a nice bike and most of an apartment in Berlin.

At the Fahrradsalon in the Kreuzkölln district, loud electronic music is playing as I wander among the assorted old two-wheelers, plus musical instruments, chandeliers, art works, a punching bag and manikins dressed in random cycle garb. It's an eclectic neighborhood store that focuses on cheap second-hand bikes and repairs because there is so much demand, especially among the young students and artists in the area.

Thomas, Fahrradsalon's long-haired, laidback owner, says he recently had a party with 70-odd people in the basement store. Since Thomas lives upstairs and is in the shop until at least 9:00 p.m. six days a week, it's inevitably a place where friends and locals often catch up, usually on the sunny front pavement where the rental bikes await tourists.

"In Berlin, a lot of people have crap bikes. A lot of people are riding old cheap bikes," says Klaus from Glücksvelo, another busy neighborhood bicycle shop in Neukölln. "We sell lots of second hand pieces; they're more affordable."

As a woman tries to fix her flat tire out front as bicycles and dog-walkers slide past, Klaus explains that, while the store specializes in classic racing bikes from the 1960s to 90s, they are often just trying to get their neighborhood clientele back on the road.

"We are not rich people; it's a small business," he says. "I'm into bikes. I believe in them." Klaus, who also builds cargo bicycles in his spare time, suggests that a large chunk of Berlin (specifically, the area inside the "ring" train line) should be made car-free. I'm sure the folk at Radlust would back his idea.

Klaus and I are soon joined outside by Robert, who lives in the same building and regularly enjoys a drink with the Glücksvelo workers on the leafy front pavement. He praises the store's "archive" of rare old parts. He recently cleaned up an old post bike from the 1950s, his pride and joy, but it had just been stolen. For the Berliner, there is no worse fate. Robert, a student, seems rather crestfallen. But he knows that in Berlin it won't be hard to get back on the road.

East Germany's beloved hat-wearing traffic light symbol, the Ampelmännchen, should be made the European standard, recommend researchers. He sparked quicker reaction times than his trim counterpart in the West. (14.08.2013)

Now a busy, multi-cultural hub for startups and techno, Berlin has been through a lot in recent years. DW's Kate Katharina Ferguson experiences the city through the eyes of someone who's known it for nearly a century. (09.08.2013)

On the road in Berlin

Berliners have important appointments on every corner of their gigantic city. That means they have to be resourceful when it comes to getting from A to B, says experienced Berlin commuter Lavinia Pitu. (02.08.2013)