East Germany's beloved hat-wearing traffic light symbol, the Ampelmännchen, should be made the European standard, recommend researchers. He sparked quicker reaction times than his trim counterpart in the West. 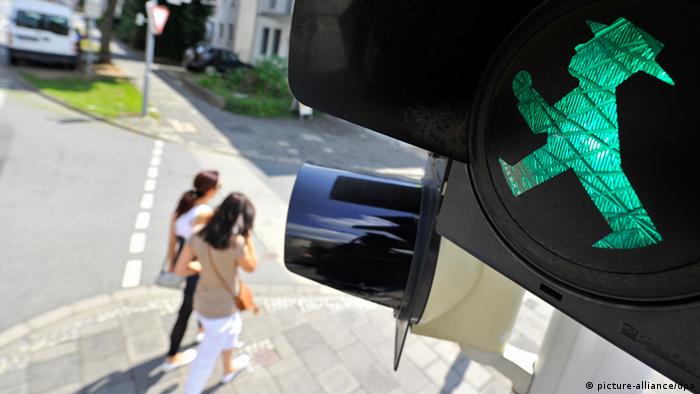 He's got a knack for surpassing expectations. All his job description required was to help pedestrians cross the street safely. Who knew he'd inspire a line of memorabilia and even his own restaurant?

More than 50 years after he embarked on his career, East Germany's Ampelmännchen (literally, "little street light man") continues to bask in cult status - and was recently validated by researchers from Jacobs University Bremen that say the traffic light figure should be the model for all of Europe.

"Our study shows that the East German Ampelmännchen have not just become iconic symbols of so-called 'Ostalgia,' but are also giving their West German counterparts a run for their money when it comes to signal perception," said Claudia Peschke, a postdoctoral fellow at Jacobs University. So-called Ostalgia, a play on "nostalgia," refers to people's longing for the positive parts of East German culture that were lost after unification with West Germany in 1990.

Rather than using abstract signage to study how we process visual attention, Peschke thought, why not measure the effectiveness of symbols we see every day? 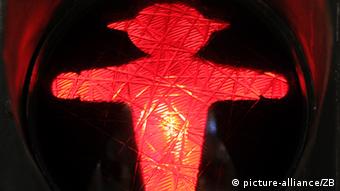 "In this context, the Ampelmännchen came to mind," Peschke said.

In the end, the pronounced stride and steadfast stance made the quirky figure from the East more effective than his svelte Western comrade. Even when the colors were reversed, participants reacted faster and more accurately to the East German Ampelmännchen.

Perhaps because his outstretched "don't-walk-now" arms bear a resemblance to a "do not enter" sign? Peschke said these findings should alert EU decision-makers set to homogenize crosswalk lights throughout Europe and offer insight into the effectiveness of other signage, like emergency exits.

When East German traffic psychologist Karl Peglau designed the now-iconic figure in1961, his goal was to craft a traffic signal that pedestrians found appealing. If people were ever going to follow the figure's advice - stop or go - he reasoned, they needed to like the little guy. 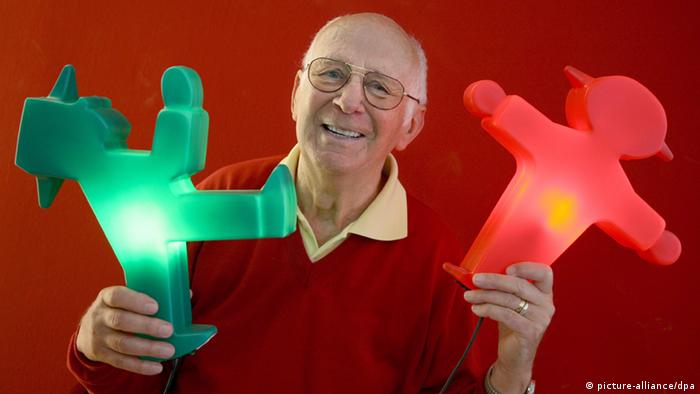 Following Germany's reunification in 1990, Western standards overrode Eastern standards, threatening the fate of the East's Ampelmännchen. In the mid-1990s, designer Markus Heckhausen scavenged some of the leftover crosswalk lights, repurposing them into lamps.

He later founded Ampelmann Ltd. and started marketing the nostalgic symbol on souvenirs. This propelled the little light man to worldwide fame - evidenced by Ampelmännchen shops in Seoul and Tokyo. Even the mayor of Hollywood has plans to equip a major crosswalk there with the beloved illuminated German.

Although he was not aware of the Ampelmännchen study before results were published, Heckhausen said he isn't surprised. He has advocated the East's Ampelmännchen as the better candidate for the past 15 years. And although psychologist Peglau never imagined the cult-following that would ensue, he expressed one wish before be passed away in 2009. 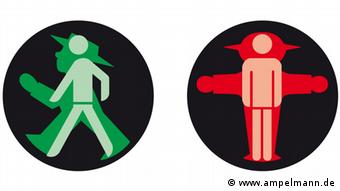 "If I could have one dream, it would be that the east 'ampel man' would be approved of by a judgement-free jury," Peglau said in an interview with Ampelmann Ltd. "Then the ordeal of the jury would be that the East's ampel man should be made into the European ampel man."

Researcher Peschke said there are no active lobbies to deploy Ampelmännchen at the European level, but the figure is popping up in other niches.

When crosswalk lights need replacing or when brand new ones are installed, Berlin has been using the Eastern Ampelmännchen for the job since 2005. As a result, he now struts across - or boldly barricades - most of the crosswalk lights in Germany's capitol. In Darmstadt, he instructs children to cross or not at the Frankenstein school. In Hamburg, the hat-wearing lad appears in pedestrian lights near the famous International Building Exhibition (IBA) and the International Garden Show (IGS).

"At least the study was a good opportunity to reflect on the introduction of the East German Ampelmännchen in Hamburg," researcher Peschke said. "Who knows what is yet to come?" 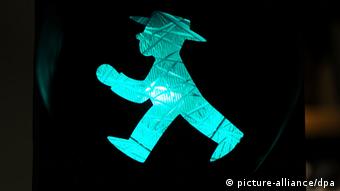 For Peschke, what is yet to come is a new study to identify parts of the brain that help control our visual attention during conflict. While she's collected - and been gifted - all sorts of Ampelmännchen memorabilia, Peschke said this time around, the little man can go back to his duties as pedestrian protector.

"Unfortunately, we cannot use Ampelmännchen signs for this kind of research," she said.

As for Ampelmännchen, even if he can't hack it on the European scene, his Hollywood debut may be just across the next walkway.

"We've been in touch with Hollywood producers and a screenwriter," said Markus Heckhausen from Ampelmann Ltd. "There are already several ideas, but implementing those ideas still may take awhile."