During the Holocaust, more than 20 million people were subjected to forced labor - a crime that remained unspoken for many years. This week, the Jewish Museum in Berlin opened a comprehensive exhibition on the issue. 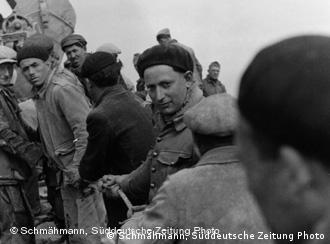 Jews were among the first victims of the Nazis' system of forced labor, both in Germany and in the occupied regions. They were publically humiliated and denigrated as being unwilling to work. This institutionalized cynicism is embodied in the inscription found above the gates to the Nazis' concentration camps: "Arbeit macht frei," or "Work sets you free."

By 1941, forced labor had become standard practice in nearly all areas of society, explained Volkhard Knigge, director of the Buchenwald concentration camp memorial center - "from private household help, to agriculture, industry and the church."

The exhibition at Berlin's Jewish Museum focuses on "the penetration of National Socialism into German society and the racism that was a core element of forced labor."

Around 1,000 items on display at the museum - photographs, letters and documents - reveal the extent to which the denunciation of Jews, Sinti and Roma became part of everyday life in Nazi Germany.

"Since forced laborers were used in every part of society, every German had to decide how they dealt with them - with humanity, or with the hostile criteria of racist ideology," said Knigge. 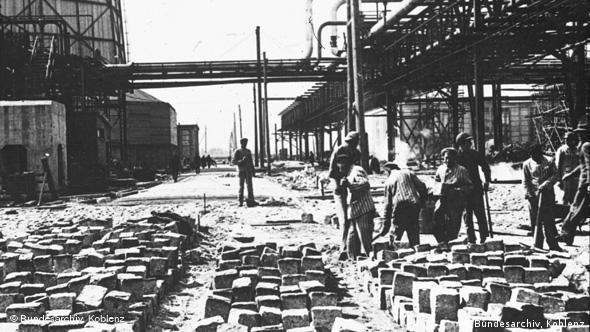 The chemical company IG Farben used prisoners to erect a factory near Auschwitz, where it produced the toxic chemical used in the gas chambers

Uncovering the fates of survivors

Frenchman Jacques Leperc was in his early 20's when he was forced to work at carmaker BMW, where the conditions were dangerous and unhygienic. His written account of his experiences is part of the Berlin exhibition.

"It was freezing cold in the barracks where I was quartered," wrote Leperc. "I worked 12-hour days, alternating every other week with 12-hour night shifts, which were constantly interrupted by air raids."

Despite falling severely ill, Leperc survived the exploitation. Knigge explained that extensive research was done ahead of the exhibition in order to highlight the fates of survivors like Leperc after the war.

Even after the concentration camps had been liberated by the Allies and the war came to an end, the issue of forced labor was repressed. It took over half a century until the German government - and the industries which profited from forced labor - gave in to international pressure and financially remunerated the victims.

"Humanitarian aid for the surviving forced laborers occurred at a time when 80 percent of them had already died of old age," said Jens-Christian Wagner, curator of the exhibition at the Jewish Museum. "And even today, many of the forced laborers - like the Soviet and Italian prisoners of war - still have not been compensated." 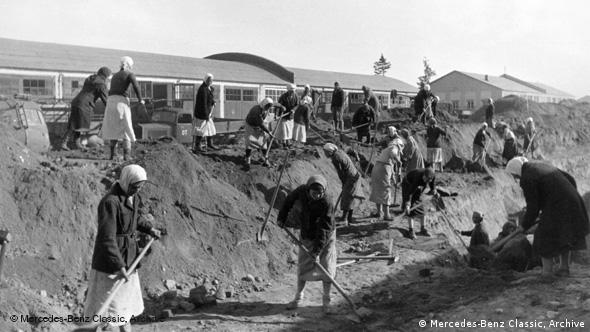 The Daimler factory in Minsk was supported by forced laborers

On display in eastern Europe

Next year, the exhibition will also be shown in Warsaw, while additional locations are currently under negotiation. The organizers are hopeful, however, that doors will open in cities that were formerly part of the Soviet Union, where returning forced laborers were often branded as traitors of their homeland after the war.

Polish historian Marian Turski, who himself is a survivor of the Warsaw Ghetto and the concentration camps in Auschwitz and Buchenwald, regrets that only a few of the survivors in Warsaw would be able to see the exhibition.

"Most of them are old and live in the countryside," he said. "It will probably be a bit harder for them to come to Warsaw to see the exhibition."

While a prisoner at Auschwitz, Turski was forced to build roads. At Buchenwald, he worked in a crew together with Imre Kertesz, the Hungarian author who later won the Nobel Prize for Literature.

Turski added that it was more important for the next generation to visit the exhibition and learn about the Nazi crimes that had been kept quiet for so long.

US investors to sue Germany for defaulting on pre-Nazi bonds

Hitler declared old German bonds worthless when he came to power. Now a group of US investors wants Germany to pay out to the tune of hundreds of millions of dollars on the Weimar Republic era bonds. (11.09.2010)

The Remembrance, Responsibility and Future Foundation no longer pays out compensation to victims of Nazi forced labor in 2007. But it hasn't stopped working to publicize the former forced workers' suffering. (17.07.2010)