Berlin to stop housing refugees in Tempelhof hangars - in theory | Germany| News and in-depth reporting from Berlin and beyond | DW | 20.07.2016

Berlin to stop housing refugees in Tempelhof hangars - in theory

The Berlin government is hoping to close down the mass refugee shelter at Tempelhof airport - though only after another 2,000 people have moved there temporarily. Refugee helpers wonder if it will go according to plan. 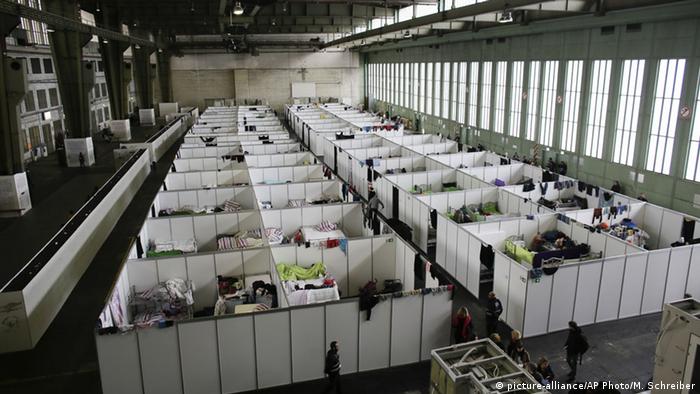 Berlin is drastically revising its plans to manage its refugee population, after the closure of the Balkan route reduced the numbers coming to the city. But whether the new plan will play out as advertised is another matter.

The city government no longer wants to build a vast "arrival center" at the historic, much-loved, now disused Tempelhof airport - currently home to around 1,200 refugees. Instead, Berlin officials want to divide the housing and administration into two locations and close the hangars as a mass refugee shelter by 2017. New arrivals will spend a maximum of 72 hours at the airport while they are registered, and more detailed data will then be collected at the Federal Office for Migration and Refugees facility on Bundesallee in the west of the city.

But since the government also wants the city's sports halls to be emptied of refugees - so that schools can use them again - some 2,000 refugees will have to be moved into Tempelhof's hangars temporarily until the end of the year. By then, the government says, better-equipped "Tempohomes" will be set up outside the hangars for the refugees to move into.

Berlin's Minister for Social Affairs Mario Czaja presented the new plan this week, promising that it would be both cheap and quick. "This means that together [with the federal government] we have found a pragmatic, easily implemented and moreover cost-effective solution," he said in a statement. 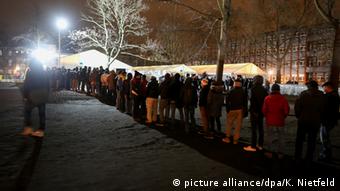 Local helpers wonder whether it would all run as smoothly as the minister promised. Katharina Müller of the NGO Berlin Refugee Council welcomed the decision not to relocate the entire refugee management system to Tempelhof, but she had serious reservations about whether it would all be as easy to implement as Czaja said.

"We have a lot of doubts that the planned emptying [of the hangars] will happen by the end of the year," she told DW. "Czaja has lost a little of his credibility, because he said that the Tempohomes would be built more quickly, and now it's taking a relatively long time."

As Müller and many opposition politicians have pointed out, Czaja is in a good position to make all kinds of promises, since Berlin is having a mayoral election in September and he may well be out of office by the end of year anyway.

Margarete Heitmüller of the "100% Tempelhofer Feld" initiative was incensed by the plans to build new shelters for thousands of people outside the hangars. "It's a nice headline for Czaja in the election campaign after the summer vacation - they freed up the sports halls, but what happens when it reinforces all the chaos in these container settlements - that will be completely swept under the rug. They're going to be there permanently," she told DW. 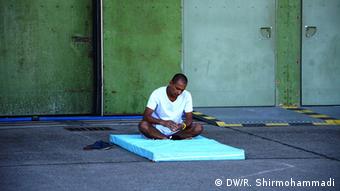 Berlin, which has one of Germany's poorest and slowest state bureaucracies, has struggled with the influx of refugees. Along with the chaotic scenes at the massively overburdened LaGeSo registration center in the north of the city, the sight of several thousand people sleeping inside the hangars at Tempelhof airport was among the defining images of Germany's refugee crisis last year.

But Angela Merkel's asylum restriction packages, and the closure of borders in Europe, have reduced the flow: around 12,200 people have sought asylum in the nation's capital so far this year, a fraction of the 80,000 that came in 2015. Last November, the average daily intake was 554 - now it is 31.

At one point there was talk that up to 7,000 people would have to be housed at Tempelhof, which would have turned part of the scene of Berlin's famous Cold War air lift into the biggest refugee camp in continental Europe.

Many refugees are still forced to spend months living in makeshift partitioned spaces in the hangars - with 12 bunk-beds to a section. Employees of the Tamaja company, which currently runs the facility, have reported depression and self-harming among the inhabitants, the "Berliner Morgenpost" newspaper has reported.

"There is minimal privacy, no doors, there's a constant noise in the hall - it's absolutely inhumane to put people in a hall like that for weeks and months," said Müller. "It's the same in the sports halls. There's a sports hall in Berlin where the light can't even be turned off at night. It's torture - whether deliberate or not. [The authorities] don't seem to see that there are people being kept there, not goods - people who are trying to integrate into local districts."

Even as the city prepares to send 2,000 refugees into the hangars, more and more of them are protesting and refusing to move. 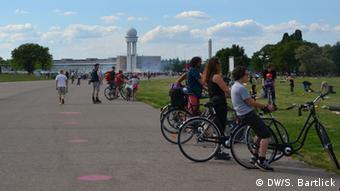 "People are being moved from one sports hall to the next, just because of bad planning - they don't know where they're going to sleeping next week," said Müller. "These people are being systematically broken by it. And of course eventually social problems arise out of this."

The city's shortage of affordable housing has exacerbated the problem. Searching for a flat in Berlin is hard enough for Berliners; being a refugee adds an extra layer of bureaucracy that makes it tough even for the most patient of landlords to accept them. "[The city] is driving away potential new tenants and citizens," said Müller.

"I think there is some political will there, but there are communication problems between the state-level and the district-level authorities," she added. "The responsibility gets pushed from one side to another, and there is a lack of common will."