After the widespread flaunting of coronavirus regulations at a recent march, Berlin has moved to enforce wearing masks at all future protests with over 100 participants. The officials warn of rising infections. 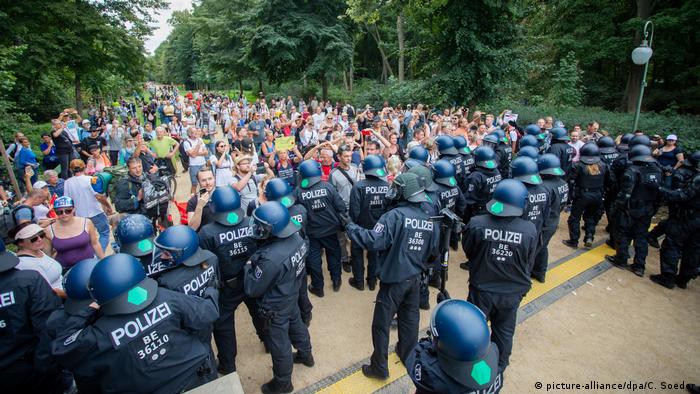 In Berlin, anybody taking part in a rally of over 100 people would soon be required to wear a face mask, the city's mayor Michael Müller confirmed on Tuesday.

Face masks also have to be worn at smaller demonstrations if the protesters chant slogans or sing.

The decision followed a dispute between local authorities and coronavirus skeptics who were allowed to demonstrate on Saturday, August 29, despite attempts by the city to ban the march. The lawmakers made the changes due to the rising infection numbers and "the non-observance of distancing rules and hygiene regulations at the protests."

The Saturday rally, which was quickly declared illegal by police after protesters refused to abide by coronavirus regulations, ended with a group of right-wing extremists attempting to storm the Reichstag — the seat of the German parliament.

Berlin Mayor Michael Müller announced the new amendments on Twitter, stating that "at open-air meetings of more than 100 people, especially demonstrations, the wearing of a mouth and nose cover is now compulsory.”

Until now masks have only been obligatory in shops and on public transport, as well as for children at school, outside of lessons.

Dilek Kalayci, State Minister for Health, Care and Equality in the Berlin Senate, confirmed to local television station RBB24 that, "today in the Senate we discussed the current epidemiological situation, but also the events of the weekend."

She went on to warn that "if the number of infections increases, we will reach our limits."

A further demonstration was planned for Tuesday afternoon according to a statement given by a German police spokesperson to the Berlin newspaper Der Tagesspiegel.

It was unclear who was behind the planned protest, but it would not be affected by the new ruling as this will come into effect on Saturday, according to the newspaper.

Alongside the decision to make masks mandatory at protests, further new regulations were also agreed on. These included demanding that anyone who wishes to host a private party such as a wedding or birthday will be responsible for ensuring that safety measures are abided by and to keep track of guests contact details to support the tracing of any possible outbreaks.