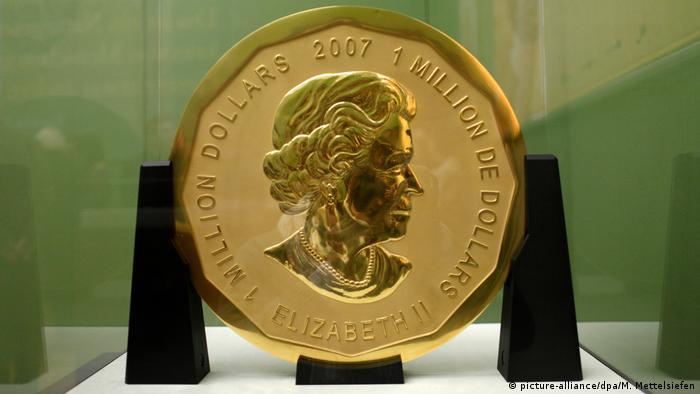 A Berlin court sentenced three men on Thursday over the 2017 theft of a gigantic gold coin from a city museum.

The coin, dubbed the "Big Maple Leaf," weighed roughly 100 kilograms (220 pounds) and had an estimated value of €3.75 million ($4.05 million). It was stolen from Berlin's Bode Museum in the night of March 27, 2017 and has not been recovered. Police believe it was cut up into smaller pieces, as they later found gold particles.

The Canadian coin was imprinted with the image of Queen Elizabeth II. It was only one of five in the world made by the Royal Canadian Mint. It is thought to be the world's second-largest coin.

Two defendants, ages 23 and 21, were sentenced as juveniles and handed four-and-a-half-year prison sentences. The third convicted defendant, a 21-year-old guard at the museum, received a prison sentence of three years and four months. A fourth defendant was acquitted.

The trial, which began more than one year ago, lasted 41 court days. State prosecutors had pushed for all four men to receive prison sentences of between five to seven years, whereas the defense attorney had argued for acquittal.

41 days of hearings packed with personal and expert testimony convinced the court that cousins Ahmed and Wissam Remmo had orchestrated an insider job with Denis W., a childhood friend of Ahmed's, freshly hired in March 2017 to guard the 100-kilogram gold coin.

"This relationship was the lynchpin of the crime," Prüfer told a packed courtroom at Berlin's Regional Court.

Between 3:20 and 3:50AM on March 27, 2017, the Remmo cousins, together with an unidentified accomplice, walked along the light-rail tracks running parallel to the Bode Museum in central Berlin, from which they accessed a changing room for museum staff.

From there, they quickly infiltrated the Bode Museum's world-renowned coin collection housing some 540,000 pieces. That included the "Big Maple Leaf," on special exhibition since 2010.

Within a half-hour, the team had freed "Big Maple Leaf" from its bulletproof-glass case, rolled it back to their point of entry, dropped it down to the tracks, and pushed it along to a neighboring park in central Berlin, where a getaway car awaited.

Read more: Art theft: 'There is always a risk for museums'

A trail of evidence

The 99% pure gold coin, one of six in existence, was never seen again. But it left behind a trail of evidence leading investigators to four suspects, authorities said.

Denis W. had been hired at the Bode Museum as a security guard just weeks before the heist. Digging into his past, authorities discovered the connection to Ahmed Remmo, whose family is among one of Germany's most notorious crime networks.

"How can it be that someone who has never worked in Germany can accumulate millions in wealth?" Dr. Ralph Ghadban, a sociologist who has studied the family, told Germany's Focus magazine in 2019, referring to Issa Remmo, the family's patriarch.

Authorities also discovered that Denis W. had worked the museum's graveyard shift on the days leading up to the heist, when three suspicious men dressed in all black walked the exact getaway route, according to security footage.

Expert analysis of the size and stature of the men portrayed in the security camera footage matched cousins Ahmed and Wissam Remmo, both high-school dropouts convicted multiple times for past petty crimes.

A subsequent search of Ahmed's apartment turned up clothing with gold particles matching the high purity of "Big Maple Leaf." The same particles were found in more than one of the Remmo family's cars, suggesting the coin was immediately broken apart, melted down, transported and sold.

Meanwhile, a search of Wissam's apartment resulted in a pair of gloves with security glass particles matching those of the window through which the thieves accessed the museum. His phone also contained a detailed search history of how to break down large pieces of gold, and investigators uncovered a rare Armani jacket in his possession clearly identifiable in security footage.

Defense attorneys' attempts to dispute the mounds of evidence against the three men proved futile. But prosecutors were unable to secure convictions against all of the accused to the degree they had initially hoped.

Security guard Denis W., just 18 years old at the time of the theft, was sentenced to three years and four months behind bars, as well as a fine of €100,000 — the amount phone records and investment inquiries he made after the fact indicated he received for his part in the theft. Prosecutors had originally sought a six-year conviction.

Ahmed and Wissam Remmo, 18 and 20 years old when the crime occurred, were each sentenced to four-and-a-half years in prison. Authorities had initially sought a maximum sentence of seven years for each perpetrator.

They were both, however, fined for the estimated price of the coin — a whopping €3.3 million. All of the suspects were tried and sentenced according to juvenile law, based on their ages at the time of the crime, authorities said.

Wayci Remmo, the fourth defendant in the case and Ahmed's brother, was acquitted of all charges. The prosecution's attempts to prove his involvement using high-tech models that linked him to security footage proved unconvincing, Justice Prüfer said.

But speaking to a flurry of reporters after the trial, lead prosecutor Thomas Schulz-Spirohn said his office would continue investigating other members of the Remmo family believed to have taken part in the theft. 52-year-old Issa is already standing trial for verbally assaulting a police officer.

"We will calmly review the evidence and won't steer clear [of further investigations]," Schulz-Spirohn said.

Both the prosecution and the defense now have a week to appeal the decision, according to German law. DW could not immediately reach the defense team for comment.

Thieves have broken into Dresden's Grünes Gewölbe, one of the world's oldest museums, and made off with three priceless' sets of 18th century jewelry. The museum houses one of Europe's largest collection of treasures. (25.11.2019)

Several people have been arrested in Berlin in connection with the spectacular heist in March of a 100-kilo gold coin from a museum in the city. The "Big Maple Leaf" is estimated to be worth several million euros. (12.07.2017)