Thieves have broken into Dresden's Grünes Gewölbe, one of the world's oldest museums, and made off with three priceless' sets of 18th century jewelry. The museum houses one of Europe's largest collection of treasures.

The eastern German museum, known in English as the Green Vault, houses one of Europe's largest collection of treasures.

Two thieves were seen on camera entering through a window and later escaping in a vehicle. Police said there may be more people involved.

Police said the thieves targeted the historic section of the museum, which is divided into two sections — the historic treasure chamber of Augustus II the Strong dating to 1733, and the new section, which displays individual treasures.

The thieves stole at least three priceless 18th-century jewelry sets, according to General Director of Staatliche Kunstsammlungen Dresden Marion Ackermann. She said the material value was low, but the worth from its historic and cultural value was impossible to gauge.

"We are shocked by the brutality of the burglary," Ackermann said.

The museum's power supply was possibly sabotaged by a fire before the break-in. The responsible energy supplier confirmed the incident and said it was investigating if the two events were linked. Police said power failure plunged the entire area into darkness, making video analysis difficult.

Ackermann told German broadcaster ZDF later Monday that multiple alarms were triggered by the burglary itself and through motion detectors in the room. Police were notified with the first alarm.

She also said the perpetrators "couldn't take everything with them because all the objects were also individually secured and were sewn with stitches into the ground."

Police said they had alerted neighboring authorities to watch for the offenders and had even closed motorways to search for the vehicle.

A car was later found torched, but police said they were investigating if it was related to the incident.

Saxony State Premier Michael Kretschmer denounced the crime. "Not only the state art collections were robbed, but we Saxons," Kretschmer said.

"The treasures that can be found in the Green Vault and in the Residence Palace have been hard-won by the people in the Free State of Saxony over many centuries.

"One cannot understand the history of our country, our Free State, without the Green Vault and the State Art Collections of Saxony." 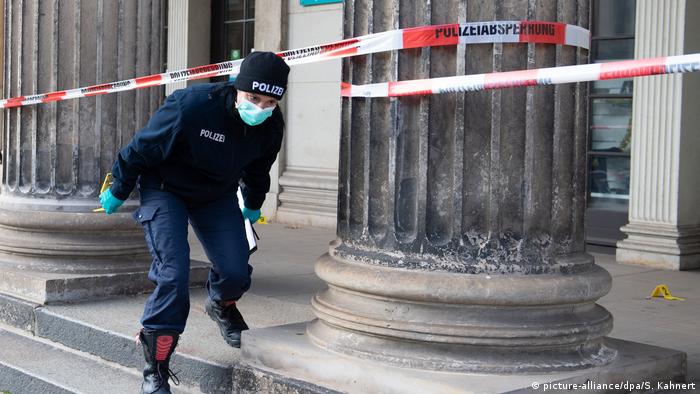 Police said they were still investigating what had been taken

Across 10 highly decorated rooms, about 3000 pieces of jewelry and other masterpieces made of gold, silver, precious stones, ivory and other valuable materials are displayed.

The building was damaged in World War II but was subsequently repaired. Since its reopening in September 2006, it has been one of Dresden's tourist magnets.

Marc Bertoldi has been found guilty in "one of the biggest" diamond heists in Belgium. In 2013, a team of armed men disguised as police officers stole diamonds worth €37 million from a plane about to take off. (27.06.2019)