When a 100-kilo, $1 million Canadian coin was stolen from a Berlin museum, the director was weak in the knees. He told DW why he's hopeful the coin will be recovered - and displayed in any condition. 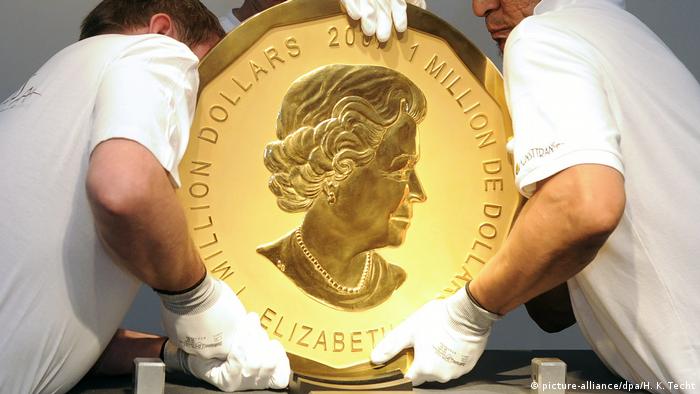 Called the "Big Maple Leaf," a coin weighing 100 kilograms (220 pounds) was stolen from Berlin's Bode Museum earlier this week. Issued by the Royal Canadian Mint in 2007, it features the portrait of Queen Elizabeth II. The massive piece has a diameter of 53 centimeters (21 inches) and is three centimeters thick. It has also entered the Guinness Book of Records for its unsurpassed purity of 999.99/1000 gold.

The thieves are believed to have broken into the building located on Berlin's famous Museum Island by setting up a ladder from the adjacent tram tracks. Deducing there were at least two people involved, investigators later revealed that the thieves transported the stolen coin along the adjacent train tracks using a very old-fashioned device: a wheelbarrow.

DW spoke with Bernhard Weisser, the director of the Münzkabinett of the Staatliche Museen zu Berlin, the numismatic collection to which the Bode Museum belongs.

DW: Professor Weisser, were you shocked when you learned of the theft? 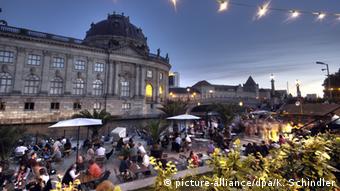 The Bode Museum is part of Berlin's Museum Island

Bernhard Weisser: Yes, absolutely. At first I thought it was an early April Fool's joke. Then I thought it was a test for the alarm system. And when I finally understood what had happened, my knees were shaking.

What did you ask yourself first?

My first question was: How could this happen? How could our security system, which has functioned for decades, be overcome? And then I immediately thought of the staff, but fortunately nothing happened to them.

Have you reached any answers as to how the theft happened? Was the museum adequately protected?

It wasn't just child's play with a ladder and a wheelbarrow. Numerous security systems had to be overcome. But of course the answer is still no. Otherwise, it wouldn't have happened. It takes a great deal of criminal energy to get around these security systems. I think we will learn more soon.

The material value of the coin was much higher than its face value. Presumably the thieves were after the gold. They seemed less interested in art history. How much will insurance pay?

The gold coin was on loan and therefore insured. We don't yet know the damage exactly. We still hope that the coin will surface.

How much is the coin ensured for?

With art, that's a tricky situation. With this coin, the material value and the replacement value were calculated. Together with the lender, we then reached a sum to insure the coin for what seemed appropriate for both parties - and which also took the possibility of replacement into account. Of course, there are only five of these coins, so that makes it extremely difficult. That is also the reason why we don't lend out the Nefertiti - because the insurance would be so expensive that no one could pay for it.

You are an expert in numismatics. In terms of art history, how valuable is this coin?

We have had the object since 2010. At the time, we were holding an exhibition on giant gold pieces. The coin was the largest and heaviest coin in the world when it was made - it was truly a gold giant. After the exhibition, we suggested to the lender that the piece be left in our museum on permanent loan.

The Royal Canadian Mint had a good reason to make the coin. They were very proud of managing to make gold coins that were particularly pure, which is why they wanted to create these special ones.

Seven years have passed since the collector entrusted you with the coin. Has their trust been broken?

We are in constant contact with the collector, whose trust is very strong. The owner is of course just as shocked as we are. But at the moment I don't think that our good and trusting relationship has suffered. Of course such an attack impacts him as much as it does us at the museum.

Will he lend to you again?

We hope that the coin will resurface. And the biggest sign of trust for us would be if we could show it once again - no matter what condition it might be in.

Professor Bernhard Weisser has been the director of the Münzkabinett of the Staatliche Museen zu Berlin, one of the largest numismatic collections in the world, since June 2015. The collection includes the Bode Museum, from which the Big Maple Leaf was stolen.

For more spectacular art thefts, click through the gallery below.

Armed up to their teeth, or disguised as policemen - time and again, thieves have pilfered valuable art objects and paintings. Most recently, a valuable but very heavy gold coin was stolen from Berlin's Bode Museum. (29.03.2017)