In a radical departure, the latest cinema adaptation of Alfred Döblin's great Weimar-era novel updates the story with an African refugee as the protagonist.

In Alfred Döblin's 1929 novel Berlin Alexanderplatz, Franz Biberkopf, a working class petty criminal, emerges from Tegel prison into an unforgiving big city. Fast-forward 90 years, and Francis, as the protagonist in this second film adaptation is called, is from Guinea-Bissau and has barely survived the sinking of a refugee boat in the Mediterranean before making his way to Berlin.

Despite these differing circumstances, both want to start a new life in the German capital. Both long for work, normality, love. As German-Afghani filmmaker Burhan Qurbani said of the novel's key theme when his film adaptation premiered at the Berlinale this year: "His message of human dignity, that we dare to demand a decent life ... was translated into our film.

Now being released late due to the coronavirus pandemic, the film is an epic, contemporary take on the Weimar-era novel with a three-hour running time — unlike the first film adaptation in 1931 that ran just under 90 minutes. Rainer Werner Fassbinder's multipart television version of 1980 was also more in keeping with its literary namesake, reprising the key motifs, themes and plots and delving deeper into the historical context.

Burhan Qurbani's bold adaptation will likely connect with audiences because for the first time, it is set in the here and now. The protagonist a victim of the contemporary refugee crisis, Berlin Alexanderplatz addresses one of the fundamental issues of our time as Francis flees from West Africa to Europe and winds up in Berlin without asylum papers.

As a stateless person with no work permit, Francis is treated with the same contempt as Franz Biberkopf in Döblin's novel. After he declines an offer to deal drugs in a city park, he is drawn into the world of the criminal Reinhold, a sex addict who tries to corrupt the newcomer.

But after Francis meets Eva, a club owner, he falls into a love affair with a young escort named Mieze. In this, the basic structure of Qurbani's film follows the three-act original story. What differs are time, characters, and the milieus they move in.

In an interview with the German Press Agency, Qurbani said the focus was ultimately on the individual: "I think that the book wants to tell us something about people. The book is interested in people and how they move in this juggernaut metropolis."

It is an issue that relevant to Berlin today. "Our film is limited above all to the actual plot: the love triangle, this ménage-à-trois between Franz, Mieze and Reinhold. How they meet, drag on each other. And how Franz Biberkopf must find himself." 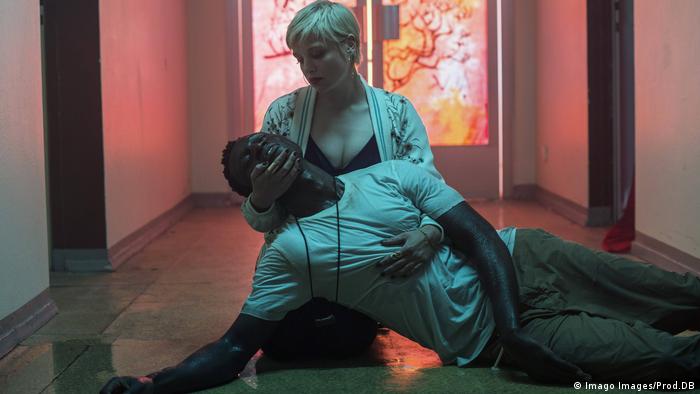 Qurbani: 'Berlin was a dangerous city for me'

According to the director, the story's setting has not changed significantly: "Berlin has lost none of the quality it had in the 1920s or 1930s. We tried to translate that into our film as much as possible."

Reading the book carefully, one recognizes a lot in the filming, Qurbani says. It retains the form and aesthetics of the modernist masterience: "What totally fascinated me was the form of the novel. The montage technique, the wild language Döblin uses, the religious and moral images he builds up."

Burhan Qurbani was born in West Germany — in Erkelenz in North Rhine-Westphalia — after his parents emigrated from Afghanistan in the late 1970s. He moved to Berlin as a teenager.

Even though Qurbani's life path cannot be compared with that of his main character Francis, his own experiences have been incorporated into the screenplay, which he wrote himself.

"The Berlin I came to was an incredibly dangerous city because there are so many ways to distract oneself and lose oneself," the director said.

Also confronted with a completely different world, Francis is vulnerable, pulled into a journey described as the "dark night of the soul." But because he demands his dignity, his "right to a decent life," he is determined to make a leap of faith into this new alien culture.

Forced from their homes by floods, storms and wars, internally displaced people across the world are now at risk of the pandemic. Distancing rules and hygiene are hard to practise without a safe home. (28.04.2020)

A daring new adaptation of the legendary novel by Alfred Döblin hits the cinemas. This time, an African refugee is drawn into the Berlin underground. (16.07.2020)

From "Berlin Alexanderplatz" to "Undine," there have been no big surprises in the nominations for the German Film Award 2020. Two prize winners have already been named in the run-up to the award ceremony on April 24. (20.04.2020)

Christian Petzold's "Undine" and the film adaptation of "Berlin Alexanderplatz" by Burhan Qurbani are among the six titles nominated for best feature film.

Robert Šoko injected "Balkan Beats” into Berlin’s nightlife in the 1990s. He made a name for himself throughout Europe with the new sound - a blend of folklore and modern club beats.

A Ukrainian refugee builds back business in Berlin 07.04.2022

People fleeing Ukraine aren't just leaving their homes behind, but also their jobs and companies. Now safe in Berlin, Oleksii Zghonik is trying to revive his film production firm.