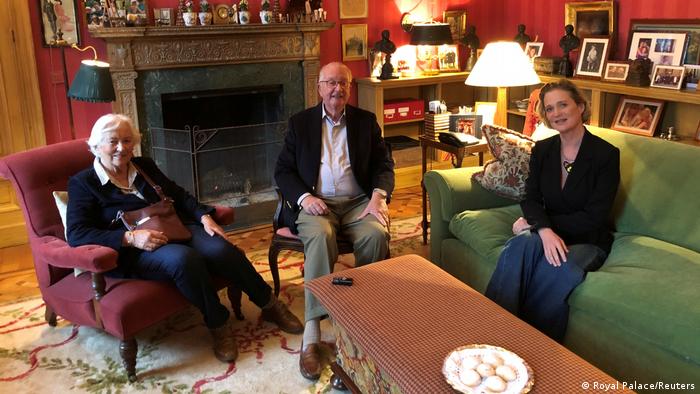 Belgium's former King Albert has met his daughter Princess Delphine after a seven-year legal battle over whether she really was his daughter.

Albert admitted paternity in January after taking a DNA test that he had initially resisted. Judges had threatened the 86-year-old with fines of €5,000 ($5,900) a day unless he agreed to take the test.

A Brussels court ruled earlier this month that Delphine, 52,  should enjoy the same rights and titles as her father's children by his marriage.

Her mother, Baroness Sybille de Selys Longchamps, had an 18-year affair with Albert before he was king.

'Time for forgiveness, healing and reconciliation'

The Belgian royal household posted a photo online with the former king and Princess Delphine during a meeting on Sunday at his castle in Brussels. Former Queen Paola also attended the meeting.

"After the turmoil, suffering and injury, it is time for forgiveness, healing and reconciliation. Together we decided to take this new path. This will take patience and effort, but we are determined," they said in a statement.

In 2005, Delphine claimed publicly for the first time that Albert was her biological father. Albert abdicated in 2013, losing immunity from prosecution in the process, and Delphine opened court proceedings shortly afterward.

The ruling also means that Delphine and her two children can use the family name of her father, Saxe-Cobourg (as it is written in French, but better known as Saxe-Coburg in English or as Sachsen-Coburg in German).

Princess Delphine will also get a share of an inheritance after Albert's death, along with his three other children — Prince Laurent, Princess Astrid and Philippe, the current king.

Belgium has a constitutional monarchy in which the king plays a largely ceremonial role.