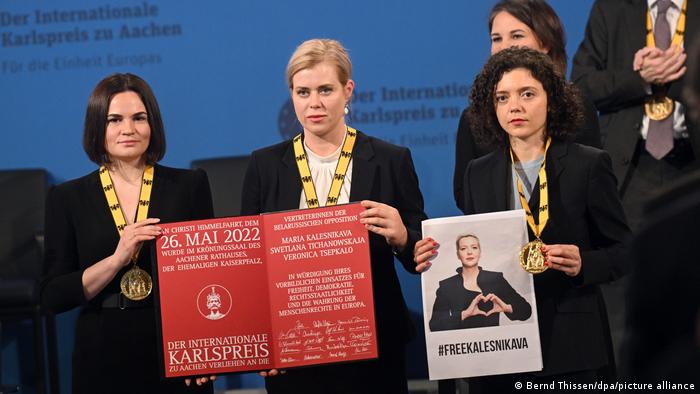 Svetlana Tikhanovskaya (left) and Veronika Zepkalo attended the ceremony, but Maria Kolesnikova is in jail in Belarus

Belarusian pro-democracy activists Sviatlana Tsikhanouskaya, Veronika Zepkalo and Maria Kolesnikova were awarded this year's Charlemagne Prize during a ceremony in the German city of Aachen on Thursday.

Tsikhanouskaya and Zepkalo are currently living in exile and were able to accept their awards in person. But Kolesnikova has been sentenced to 11 years in prison in Belarus, so her award was collected by her sister.

The prize has been awarded since 1950 and is named after medieval emperor Charlemagne, known historically as the "father of Europe."  The prize recognizes work done in the service of European unification. 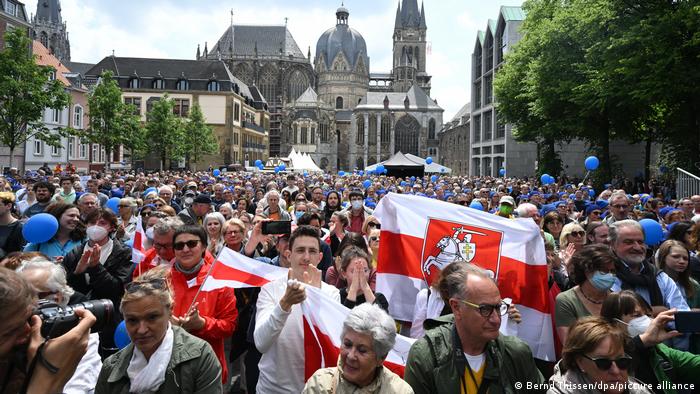 Tsikhanouskaya: Belarus and Russia want to divide the West

The three women have become the face of Belarus' opposition movement. Tsikhanouskaya was a political novice and stay-at-home mother of two when her husband Siarhei Tsikhanouski, who had launched a presidential campaign against Lukashenko, was arrested.

She took his place in the presidential election and is widely believed to have won the August 2020 vote, which Lukashenko claimed as his own victory.

In Aachen, Tsikhanouskaya called for European unity in light of the Russian invasion of Ukraine, accusing both Belarus and Russia of trying to divide the West.

"Without free Belarus there will be a constant threat to Ukraine and to our western neighbors," Sviatlana Tsikhanouskaya told DW in an exclusive interview.

Sviatlana Tsikhanouskaya: 'I didn't give up my fight'

She demanded that Russia withdraw all troops from Belarus. The Belarusian regime is collaborating with Russia, she said, but the people of Belarus support Ukraine with some fighting on the side of Kyiv.

Tsikhanouskaya also dedicated her award to the Belarusian people engaged in a peaceful struggle against tyranny, as well as "every child waiting for their mother or father to be released from prison."

Germany 'will not rest' until repression ends

German Foreign Minister Annalena Baerbock spoke at the ceremony, vowing that Germany "will not rest" until Lukashenko's regime ends its repression against the Belarusian people.

"Lukashenko proceeds against his critics with shocking severity", Baerbock said. "In doing so, the Russian and Belarusian regimes are cynically holding in contempt precisely the things for which the three of you are fighting: Peace, freedom, democracy, and human rights."

German FM: 'We cannot close our eyes when freedom is threatened'

Baerbock acknowledged that Europe had been wrong in how it dealt with Lukashenko's regime. "The belief that cooperation is possible to a certain extent even with dictators like Lukashenko may have made us act too hesitantly toward the Belarusian regime," she said.

"For me as German foreign minister, it is clear that in the future we have to look more critically, act more decisively when our values and freedom are being attacked," she added.