Siarhei Tsikhanouski: From blogger to activist to political prisoner | Europe | News and current affairs from around the continent | DW | 14.12.2021

Siarhei Tsikhanouski: From blogger to activist to political prisoner

Video blogger Siarhei Tsikhanouski wanted to challenge Belarusian strongman Alexander Lukashenko but instead received an 18-year prison sentence. How did the key opposition leader get his start in politics? 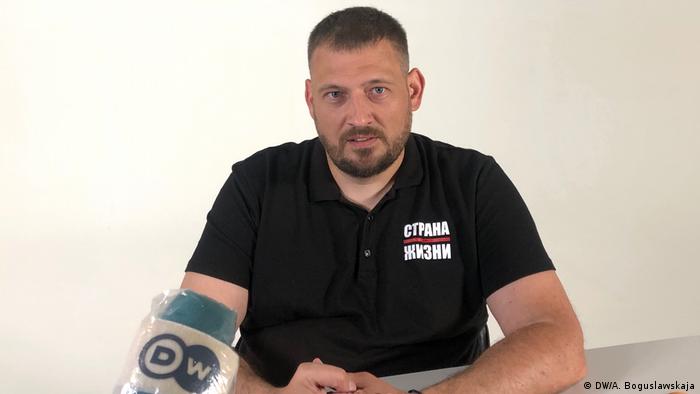 Belarusian video blogger Siarhei Tsikhanouski was in pretrial detention for more than 18 months. On Tuesday, he was sentenced to 18 years in prison on charges of organizing mass unrest and of inciting social hatred.

Tsikhanouski's emergence on the Belarusian political scene in the spring of 2020 came as a surprise to many in the country. In May 2020, media reports about him referred to a video on his YouTube channel "The Country for Life," in which he announced plans to run in the presidential election on August 9, 2020. 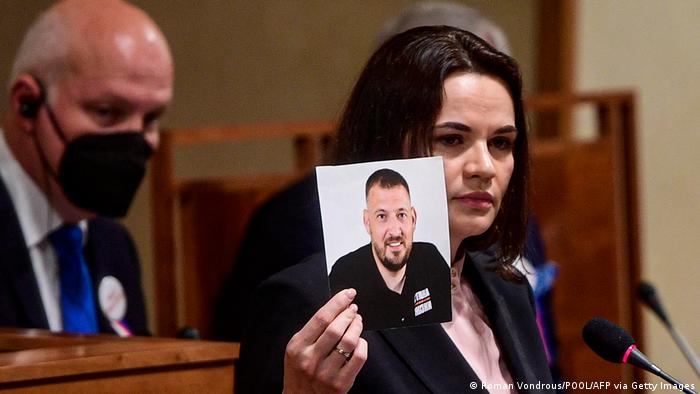 Sviatlana Tsikhanouskaya, here holding a photo of her husband, has been living in exile in Lithuania

On his YouTube channel, the 43-year-old described himself as a Belarusian "entrepreneur and blogger." At the time of his arrest, his channel had about 140,000 subscribers — that number has since grown to its current 311,000. He and some of his followers drove around Belarus in a car with the logo "Real News" to showcase the lives of people they met both in the countryside and big cities. The blogger also filmed interviews with opposition politicians and businesspeople.

Before launching his YouTube channel in 2019, Tsikhanouski owned a video production company. He became a blogger after an exchange with journalists about the "lawlessness of the authorities and criminal negligence," the Belarusian activist said. He said he decided to run for president as a result of urging from his subscribers.

"They have not seen a single candidate they could follow and trust," Tsikhanouski said in a video message.

Tsikhanouski'swife was a presidential candidate

In the end, he did not run for president. The Central Election Commission refused to accept Tsikhanouski's documents. At the time of registration, he was under arrest for participating in December 2019 protests against Belarusian integration with Russia. So his wife, Sviatlana Tsikhanouskaya, submitted her documents for registration as a presidential candidate.

Tsikhanouskaya: 'I will continue to defend the person I love'

The news came as a shock to him, Tsikhanouski told DW on May 20, 2020, just hours after he was unexpectedly released from pretrial detention. His wife was originally going to play only a nominal role in the election campaign, using legitimate opportunities to meet with Belarusians and convince them to boycott the election.

But she became the leader of the democratic forces in Belarus and a serious opponent to long-time leader Alexander Lukashenko. Many see her as the true election winner. After the Central Election Commission declared Lukashenko reelection as president, the country witnessed massive protests, as well as a violent crackdown by security forces. Sviatlana Tsikhanouskaya fled abroad. The international community does not recognize the election results. 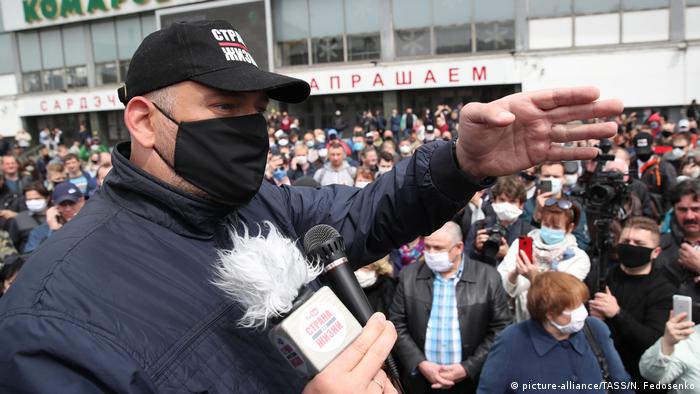 After Tsikhanouski was released from pretrial detention on May 20, he enjoyed one week of freedom, participating in his wife's election campaign, which included helping collect signatures for her participation in the vote. During one such event on May 29, 2020, Tsikhanouski and other members of the opposition were arrested and accused of using YouTube and Telegram messenger channels to organize riots and incite social hatred. A Belarus investigative committee suspected that what they referred to as Tsikhanouski's group consisted of 25 people.

Since then, Tsikhanouski has been in pretrial detention. The blogger told DW in a written interview that he does not recognize the charges against him but considers them "far-fetched and politically motivated." Belarusian human rights activists recognize him as a political prisoner.

Most of his co-defendants — about 30 people, according to human rights activists— have already been sentenced at the trial that was closed to the public and began on June 24, 2021.

This article was originally in German

Maria Kolesnikova, a top figure in Belarus' opposition movement who has been jailed in Minsk, has spoken with DW in an exclusive interview. She talks about her trial and the ongoing struggle against Alexander Lukashenko.