Belarusian factory workers, students and pensioners have taken to the streets in a nationwide strike. President Alexander Lukashenko remains defiant after 11 weeks of mass protests. 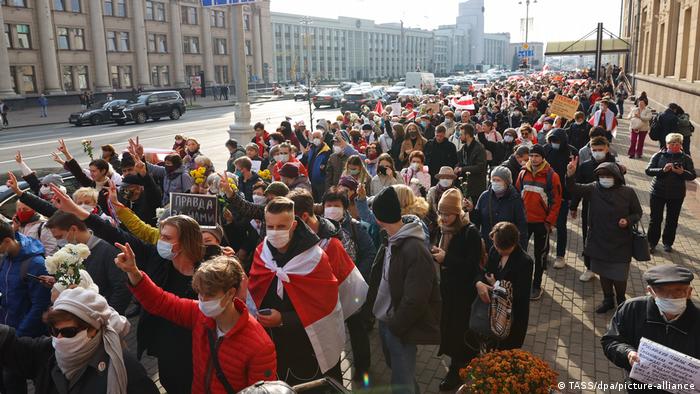 Factory workers, students and business owners in Belarus began a general strike on Monday to demand that President Alexander Lukashenko step down after more than two months of continuing mass protests following a disputed election.

Lukashenko ignored an ultimatum to surrender power by midnight over claims his August 9 re-election was rigged. The authoritarian leader had challenged his opponents to carry out a threat to paralyze Belarus with strikes.

Police used stun grenades as more than 100,000 people gathered in Minsk, Grodno, Brest and other cities. The Interior Ministry said police made 523 arrests across the country.

"The regime has once again showed the Belarusians that violence is the only thing it is capable of,'' said civil rights activist and exiled opposition figure Sviatlana Tsikhanouskaya in a statement from neighboring Lithuania.

The Belarusian human rights organization Viasna said that more than 255 people had been detained at strikes and other protests in the country on Monday.

Students in several universities refused to attend lectures and marched in Minsk in protest. Hundreds of small private companies declared Monday a non-working day. Meanwhile, shops and cafes closed their doors, with their owners and employees forming human chains all over Minsk.

Several thousand retirees marched in the capital in their regular Monday protest to demand Lukashenko quit.

"We don't see, hear or run well, but we understand perfectly well that Lukashenko lost," read one of the banners carried by the pensioners.

Managers "tried to intimidate people with riot police in the usual collective-farm manner, yelling at the workers and resorting to ridiculous threats to deprive them of pay. This only reminds them of why they took to the streets," the statement said.

Lukashenko scoffed, asking "who will feed the kids?" if workers at state-owned enterprises went on strike.

The latest twist in the standoff was being closely watched Monday by neighboring Russia and Western governments. 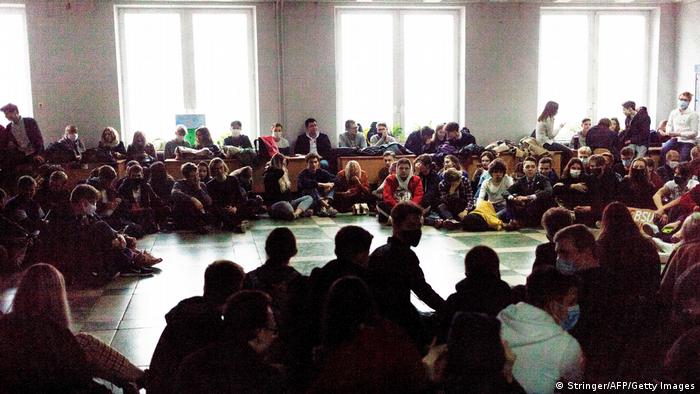 No details on turnout

Tsikhanouskaya on her social media Telegram channel had called on private businesses, clergy and athletes to join and observe the general strike call.

"Employees of state factories and enterprises, transport workers and miners, teachers and students have gone on strike this morning," she announced.

The 38-year-old did not provide figures on participation.

The head of Belarus' Confederation of Democratic Trade Unions, Alexander Yaroshuk, warned that it was hard to calculate turnout,  "given the authorities' massive pressure."

Accounts of Lukashenko's crackdown since August include harrowing scenes of abuse in jails, thousands of arrests, and several deaths.

Travel bans and asset freezes against Belarus officials accused of election fraud were recently imposed by the United States, the EU, Britain and Canada.