Belarus conductor Vitali Alekseenok tells DW why he has joined the protests in his country, as one of the Minsk musicians who gather for a flash mob every day. 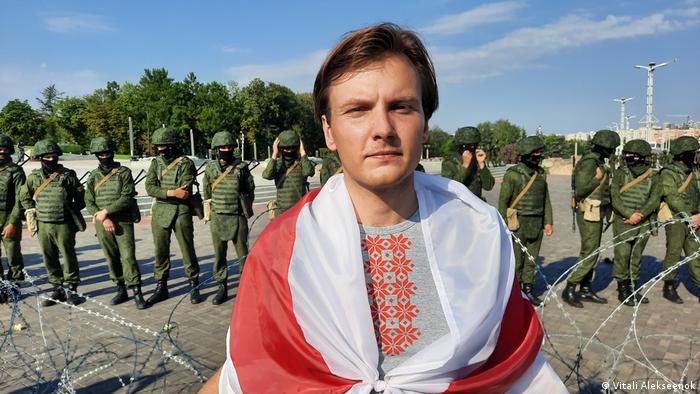 DW: You live and work in Germany, but for almost two months now, you have been in Minsk. What can you tell us about the developments during that time?

Vitali Alekseenok: For the most part, I flew to my home country to join in the peaceful protests. I thought I would be there for a few days, but I stayed for weeks. Over the past two months, Belarusian society has made a 180 degree turn away from passivity and lethargy toward an awakening and advocating freedom. Nobody, least of all I, expected anything like this to happen.

Have the protests' dynamics dropped off over time?

No. Last weekend, just as many people took to the streets as two or four weeks ago; there has just been less international coverage. We have also realized that this is not going to be a "summer revolution" like some people might have wished for — the change in Belarus is not a short-distance race, but a marathon.

More than anything, we lack structure. We urgently need institutions like the opposition's newly founded coordination council. The state structures need to be revamped, and become one with society. That will happen sooner or later. 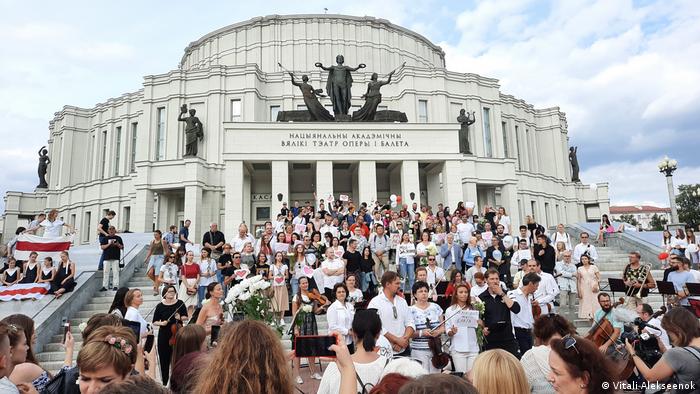 Symphony of freedom: Protest action by Minsk musicians in front of the National Opera and Ballet Theater

Why are you so sure of that?

The desire for change is very deep-seated, and it truly encompasses all levels of society. Belarusians do not tend to act rashly, they are thoughtful and patient — but they are also persistent. Also, former President Lukashenko is becoming more and more untrustworthy as the days go by. I say "former" because as far as I am concerned, he is no longer the legitimate president.

What has the Belarus culture scene's position been in the protest movement?

The culture scene has adopted a united stand side by side with the protesters and, if I may say so, it gives the protests an aesthetic dimension. Few artists still support the government, be it musicians, painters or actors. Various activities have targeted police violence. 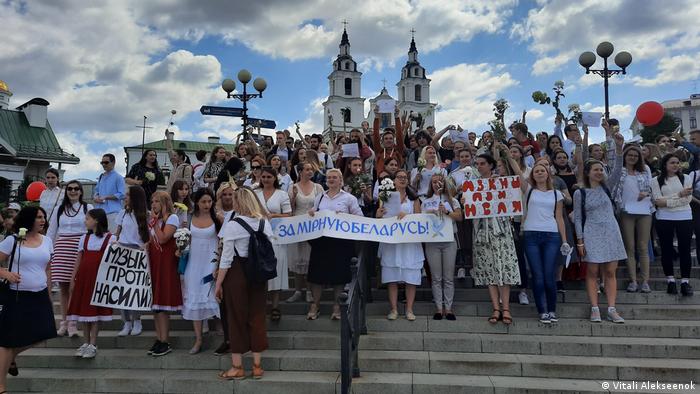 The banners of the musicians read: 'Music against violence'

I myself participate in the Minsk musicians' daily flash mob. At short notice, people arrange to meet via social media and play and sing in a different place every day as a sign of solidarity, to support peaceful change and in protest against election rigging and police violence.

Sometimes we meet at the concert hall or the state opera building, or other venues in the city center. The repertoire ranges from Belarusian folk songs to "Va, Pensiero" — the chorus of the slaves from the Verdi opera Nabucco. These performances are captured on cell phones, and the videos posted on different channels are quite effective. Some of the singers work at the Philharmonic, the Minsk Opera or other city orchestras, and they have a lot to lose — unlike me, because I work in Germany. 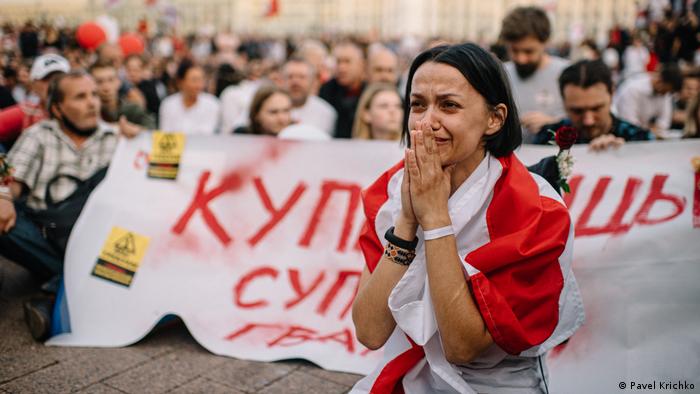 'We are with you': A solidarity protest in front of the Kupala Theater in Minsk

How do you see your role, as an artist or a citizen?

I am involved as a citizen but also as a musician. At a spontaneous concert in front of the Philharmonic building on August 17, I conducted a premiere of the poem On Freedom's Shores by the poet Andrei Khadanovitch that the composer Olga Podgayskaya had set to music. It was the two Minsk artists' response to recent events, and we performed it spontaneously and off the sheet since we had no time or opportunity for rehearsals.

More than anything, I see my role as an observer and chronicler. I am collecting material about the Belarusian culture scene's protest for a book that, if all goes well, will be published by the S. Fischer publishing house at the end of this year. Will you be telling the story of the Janka Kupala national theater in Minsk in your book?

Of course. It is an example of solidarity in the culture scene as well as of the Lukashenko regime's inability to engage in a dialogue with society. The director of this oldest and most renowned theater in Minsk, Pavel Latushko, a former state official, was fired for his criticism of police violence and participation in protest demonstrations. In response, numerous actors and theater employees resigned. Belarusian Culture Minister Pavel Bondar tried unsuccessfully to mediate in the conflict. Now the Kupala Theater is just an empty building. However, the ensemble will certainly play at some other venue in the future.

In an interview with DW, Belarusian writer Victor Martinovich warned of a "premature funeral carnival" in Belarus. Would you agree?

He is right. We still have a long way to go. There is nothing to celebrate yet.

Vitali Alekseenok, 29, is chief conductor and musical director of Munich University's Abaco Orchestra. The winner of the 2018 MDR Conducting Competition has conducted the MDR Symphony Orchestra, the Staatskapelle Weimar and other important orchestras.

Belarus opposition leader Sviatlana Tsikhanouskaya says embattled President Alexander Lukashenko must go, because protesters "will not step away." Speaking to DW, she also praised the support she's received from the EU.