The Chinese government has constructed a 3,000-meter-long airstrip on a reef in the South China Sea. The structure on the disputed waters is close to completion, a US think tank reports. 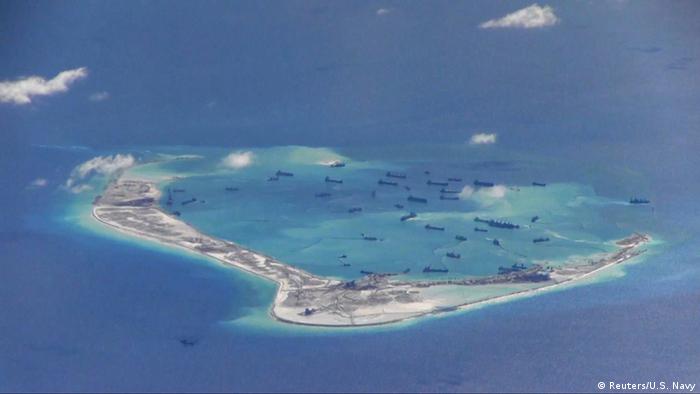 China was paving and marking the runway on the Fiery Cross Reef in the disputed waters of the South China Sea, the Center for Strategic and International Studies (CSIS) said, adding that Beijing's project was nearly complete.

The construction became widely known only recently, but work has been fast since then. Satellite pictures provided by the Asia Maritime Transparency Initiative, a watchdog group, showed a main runway, a taxiway and space for parked aircraft.

Officials could be seen walking around the area and around 10 satellite communications antennae and a radar tower were also visible, CSIS researchers told "The Washington Post."

The reef had an area of 2.74 square kilometers (1.06 square miles) and Beijing had worked on seven additional reefs, reclaiming land totaling roughly 13 square kilometers. According to a report published by "The Washington Post" on Wednesday, China had begun building bases with potential military uses in five out of the seven islands.

Earlier in June, Chinese officials confirmed they had completed some land reclamation work in the Spratly Islands.

"In the next stage, the Chinese side will start the building of facilities to meet relevant functional requirements," foreign ministry spokeswoman Hua Chunying told journalists at a briefing in Beijing at the time.

China claims most of the South China Sea and has been locked in dispute with countries like the Philippines and Vietnam, which are situated along its coast.

The United States wants Beijing to halt construction and militarization, but China has shown "no indication of willingness" to do so, the CSIS' Bonnie Glaser told AFP news agency. Washington is now mulling sending warships and surveillance aircraft within 12 nautical miles of the area.

China dismisses US accusations of expansionism in South China Sea

China has said its land reclamation work around disputed islands in the South China Sea is for peaceful purposes. The comments come after the United States charged that China was violating international norms. (31.05.2015)