Chinese media have criticized high levels of smog in the capital, after authorities were forced to advise people to stay indoors at the weekend. Pollution has hit levels deemed dangerous by the World Health Organization. 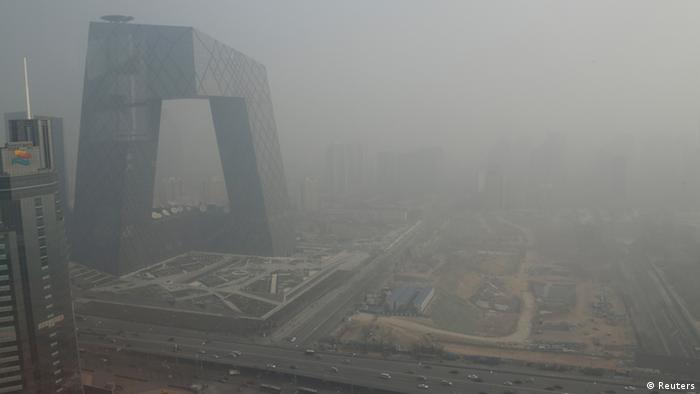 The Chinese capital Beijing was blanketed in thick grey smog for a fifth consecutive day on Monday, prompting the national press to question what can be done to improve the city's air quality.

Pollution levels peaked over the weekend at a level more than twice as high as the benchmark considered dangerous by the World Health Organization.

Some construction sites were instructed to down tools, schools cancelled outdoor activities and some factories ran below capacity on Monday, as the city sought to bring the pollution levels under control. The measures showed some signs of progress by the afternoon, according to figures compiled by the US Embassy.

"How can we get out of this suffocating siege of pollution?" the Communist Party's official newspaper, the People's Daily, asked in a front-page editorial. "Let us clearly view managing environmental pollution with a sense of urgency."

State media are thought to have a comparatively free hand to report on issues like pollution, primarily because it is so apparent to all.

China is in the midst of its coldest winter in years, prompting higher use of energy at home. The country is also one of the world's fastest-growing car markets.

Authorities on Saturday warned people to stay indoors, avoid outdoor exercise and steer clear of the most polluted areas in central Beijing if possible.

High pollutant particle concentrations in the air can increase not only the risk of respiratory diseases, but also the propensity to strokes and heart disease.