Christie's auction house in London had until now only sold physical works of art. Beeple's digital piece has become the third-most-expensive work sold by a living artist. 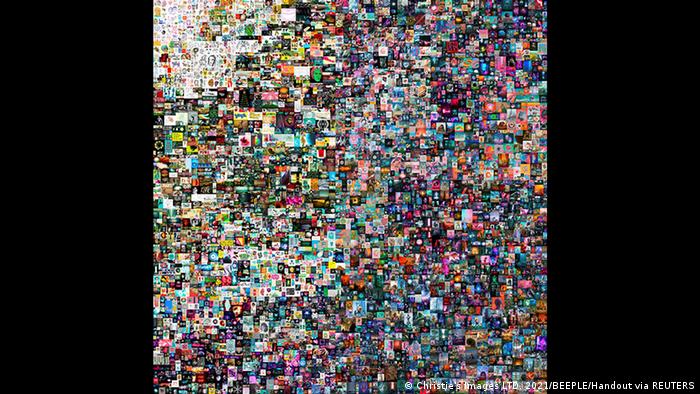 Beeple's digital artwork is a collage of 5,000 pictures

Art is always about the original. For many collectors, works of art are an investment, a prestige object — and also a tangible one.

For the first time, the renowned London-based auction house Christie's auctioned off on Thursday a purely digital work of art — a collage of 5,000 pictures by US artist Mike Winkelmann, known as Beeple.

Interest in digital art is on the rise. And thanks to technical achievements, you can now actually own digital works of art. NFT — short for "non-fungible tokens" — is the magic word. Put in simple terms, NFTs are certificates of authenticity attached to the digital artwork that identify the owner.

It is still "uncharted territory" for Christie's, the British auction house's specialist, Noah Davis, told the Reuters news agency — unlike on the internet, where NFTs are already used. For instance, people can buy and trade NBA digital trading cards — short video clips of highlights from basketball games. Clips of basketball pro LeBron James are particularly popular.

The work on sale this week at Christie's was not even Beeple's first big sale. Last year, he sold a 10-second video clip for $67,000. In October 2020, Pablo Rodriguez-Fraile was listed as the owner of the original artwork registered in a blockchain database. A few months later, at the end of February, he sold it for $6.6 million on the Nifty Gateway platform — and Beeple pocketed 10% of the sales price.

Observers say change is coming on the art market. Skeptics fear NFTs are just a hype that will pass again, a fact hotly debated in detail on the Clubhouse social media app, writes Anika Meier in her column for Germany's Monopol art magazine. Meier wonders what people do with digital art, how they show their collection. Beeple allegedly said in a conversation on Clubhouse he could imagine a print, but also an installation on the facade of a museum or a presentation on a screen.

Twitter CEO Jack Dorsey is currently auctioning off his very first tweet on the "Valuables by Cent" platform. In that famous tweet, available for anyone to see, he announces that he is setting up his Twitter account. Whoever ends up buying that tweet will receive a digital certificate. The highest bid had reached $2.5 million by March 9; the auction runs until March 21.

Are memes the digital gateway to social media manipulation?

The internet is teeming with funny photograph and GIF memes. But a closer look reveals that the medium often conveys sinister political messages, as well. That is why media literacy is key.

Da Vinci's "Salvator Mundi" holds the record for the most expensive work of art to go under the hammer. Munch and Van Gogh also make the list, and a Monet painting has broken the record for auctioned impressionist art.